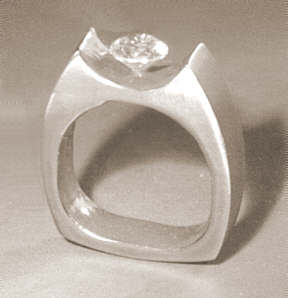 Setting a CZ in Enamel

This report will describe means for setting a CZ (cubic centered zirconium) gem in enamel, producing a ring and a medallion with a gem setting without claws (Photos 1).

The 6-mm CZ is the center of attention of an anodized titanium ring. The gem is set within the protective confines of two peaks; and I have given it the appellation ‘Gothic’ ring. It was milled from a piece of titanium alloy Ti6Al3V using a computer controlled milling machine.

The medallion was a sterling silver disc 28mm in diameter.

The ring has an enameled interior. I have made a number of titanium rings of other designs having enamel on the inside of the ring. Anyone who has one says, “It feels nice on my finger.” The ring exterior is anodized a very light blue, although the color appears darker in the photo. This color is obtained with a voltage of plus 30 volts applied to the titanium alloy.

I owe a debt of gratitude to Woodrow Carpenter who helped me learn how use Thompson lead-free enamels in enameling titanium. In an earlier paper in Glass on Metal [1], I described a project where I used a lower-expansion Thompson lead-bearing enamel on titanium. (Titanium is a metal with a low coefficient of thermal expansion (CTE) and Mr. Carpenter advised me I needed to use enamel at the low end of the enamel expansion regime.) I fired this enamel for three minutes at 1500 degrees F.

Ganoksin is sponsored by
Woodrow Carpenter who helped me learn how use Thompson lead-free enamels in enameling titanium. In an earlier paper in Glass on Metal [1], I described a project where I used a lower-expansion Thompson lead-bearing enamel on titanium. (Titanium is a metal with a low coefficient of thermal expansion (CTE) and Mr. Carpenter advised me I needed to use enamel at the low end of the enamel expansion regime.) I fired this enamel for three minutes at 1500 degrees F.

Much later, when I attempted to fire Thompson low-expansion enamels using the procedures recommended for enameling stainless steel (2-3 minutes at 1550°F), I ran into trouble. For reasons not yet fully understood, the resulting enamel coating was unsatisfactory because of a myriad of tiny bubbles. I sent samples of these unsuccessful attempts to Mr. Carpenter, who advised me to grind to 100 mesh to minimize occluded air, and to fire for ten minutes at 1200°F. I now use this protocol when firing titanium. Although I am an experimenter, I never would have tried such a wide variation in firing conditions!

For the reason why I even attempted to set a CZ in enamel, I offer the following rationale.

Mr. Carpenter has often explained in Glass on Metal the reason why glass adheres to metal. Glass is a mixture of metal and other oxides, and it should not be surprising that it will adhere to the gold- or silver- or copper-oxide that forms on the base metal at the enamel fusion temperature. Of course these metal oxides adhere to the parent metal.

Knowing that it was possible to enamel aluminum, I knew that glass would adhere to aluminum oxide. I reasoned that, since sapphire is a gem whose composition is almost pure aluminum oxide, glass should ‘wet’ or stick to sapphire. (Synthetic sapphire has a CTE similar to that of lead-free enamels.) I had a single 2-mm natural sapphire gem and some small samples of industrial synthetic sapphire and I found that lead-free enamel would indeed wet both.

The next step was another experimental one. Cubic centered zirconia is chemically comprised of zirconium oxide and a small amount of yttrium oxide (3% to 10%). It, too, has a reasonably low CTE, about the same as that of titanium. Perhaps, I reasoned, glass might wet a CZ stone. It does, as can be seen from Photo 3.

In order to effect the setting of the CZ gem into the top of the ring, I first fired the interior and the top exterior portion of the ring using wet packing and Klyr Fire. Next, with the gem resting on its table, I wet-placed a dollop of frit on the culet and I fired this, setting the gem on its table on top of a piece of clean sheet titanium. The CZ seems easily to withstand the firing temperature of the enamel, perhaps since CZs originate from a melt and since they may be used in ‘cast in place’ fabrication. Photo 4 shows three stones with fired enamel beads on the pavilion apex.

I chose the dimensions of the concave arc at the top of the ring so that when the ring is upside down it will rest on the culet of the stone when the stone is resting on its table. I fired the ring and stone together in a cold kiln so I might make centering adjustments in comfort and safety. I annealed them at 950° F for one half-hour and gradually reduced the temperature over the next four hours.

I re-read two articles on annealing (References 2 and 3) before I decided upon this procedure. Usually one does not need to anneal enamel for reasons that are explained there. I suspected this might not the case here.

The ring is thick compared to most enameled items. Also, as the glass is somewhat elastic, it seemed that a slow cooling time would allow whatever elastic movement there was going to be, to obtain, and so promote a uniform compressive stress. Furthermore, this situation is nearly a three-layer one4, with the CZ being imbedded in the enamel and thus itself being subject to some of the compressive stress by the enamel. Also, I read in Reference 3: “Rapid cooling of the composite allows little time for the enamel to flow and relieve stresses”. Since I wanted to avoid severe compression of the gem that is embedded within the glass I decided that annealing would be the safest procedure.

The ring pictured is the first one I have made so I do not yet know how rugged the setting is. At this writing it has lasted for 2 months but it is worn only occasionally as a dress ring.

Firing titanium has one major disadvantage; namely, the metal oxidizes at the firing temperature and this coating must be removed if the metal is to regain its metallic sheen, or if it is to be anodized. So far I have found mechanical abrasion is the only way to effect its removal.

Photo 5 Shows another way to use this technology in attaching a finding to the back of an enamel piece without using IT solder. In this case a silver pin-joint is used as a means to attach a seven-strand, nylon coated, flexible neck wire. The joint was fused to the counter-enameled back of a sterling silver medallion. The back of the joint was first covered with a layer of medium-expansion, lead free frit, then fired for three minutes at 1500°F. Next the medallion was placed, reverse side up, on a trivet and the assembly was fired again under the same conditions. The pin-joint is firmly attached to the medallion.

Next I wanted to test whether the procedures described above for titanium would work using medium expansion enamel and silver. A 5-mm CZ gem, again pre-fired with a dollop, was placed on its table near the 12 o’clock position on the obverse side of a previously enameled sterling silver medallion, so as to be reminiscent of the famous Movado watch face. In order to ensure the medallion was level the opposite edge was supported on two small tabs left on the silver base. The tabs were to be ground away later. This assembly was fired for three minutes at 1500°F. Success seemed to be at hand; however, it was not to be.

This assembly was not annealed and the gem popped off while it cooled on the top of a steel vice! (Bad practice in any event.)

The gem had fractured at the enamel surface interface, leaving about 1/2 mm of the pavilion in the enamel.

In the next trial I annealed a similar piece with the same result. The gem fractured as before but not before I had time to photograph it. Again, the enamel wetted the gem, and the upper broken piece of the gem still had the enamel-wetted portion adhering to it after the fracture.

Again, the bottom portion of the gem was still imbedded in the enamel.

I surmised that the problem involved the compressive stress placed by the enamel upon that part of the gem imbedded in the enamel, as the base metal contracted while cooling.

Rereading Reference 3, I noticed in Table 1 that silver has the highest coefficient of thermal expansion of the commonly enameled metals. This would result in the enamel on a silver base having the highest compressive stress due to the strain caused by the cooling and contracting silver. I have calculated that the stress in the enamel would be 1-112 times higher if the base metal is silver instead of copper; 2-1/2 times higher than if the base metal were silver instead of gold, and 3-1/4 times higher than if the base metal were titanium. While not exact, I believe my calculations are directionally correct. (To quote Mr. Carpenter3: “…the calculation is very complex, and never exact because of simplifying assumptions introduced to make the calculations manageable.”)

I tested this conjecture by imbedding a CZ in each of three pieces of enameled and counter enameled copper. All these pieces have so far survived.

If others wish to try this procedure, there are several affordable colored synthetic gems involving metal oxides. A simple test to determine if a gem will adhere to enamel involves placing the gem, table side down, on a piece of enameled base metal, and firing it. If it resists being pulled off of the cooled piece, it is worth trying to use it as described above.