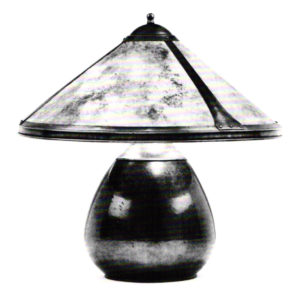 Due to a recent comprehensive exhibition at the San Francisco Craft & Folk Art Museum, we reintroduce to our readers the handwrought copper work of Dirk Van Erp, a leading handcraftsman in the American Arts and Crafts Movement, who opened his copper shop in San Francisco in 1908. The following text is excerpted from the extensive catalog written by Dorothy Lamoureux that accompanied the exhibition.

Benchmark is a continuing series in Metalsmith that presents the work of pioneers in the field of metalsmithing and jewelry, both historical figures and those of the recent past. To date, we have explored the work of Christian Schmidt, Betty Cooke and Al Pine.

Dirk Van Erp was an extraordinary craftsman whose skill flourished in America as a direct result of the Arts and Crafts Movement. The appreciation that this period engendered for honest craftsmanship permitted the Old World traditions to survive, traditions that are alive today well into the Post-Industrial Age.

The Studio of Dirk Van Erp had a large and lasting impact on the people of San Francisco and the Bay Area. Dirk perceived his craft as art, and over time as our perspectives have changed we have elevated it to a form of pure art. Dirk passed his mastery his gift, on to his children, to Harry Dixon, to Charles Johnson and to many others as well.

The objects created are an endowment. Appreciation for them has not diminished, but has in fact grown. The memory has not faded. By the many people who understand their significance, the objects are kept and cherished. 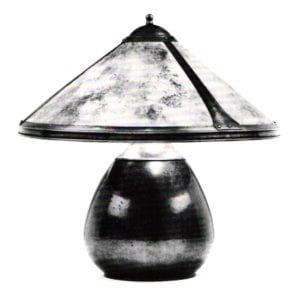 The Craft of Coppersmithing

In 1911, objects produced by the Dirk Van Erp workshop were made primarily from 12-gauge copper, which was purchased from various vendors. Some objects were made from brass. Dirk would still occasionally use a brass shell casing for hammering. The objects were made in two ways that are traditional in metalsmithing. An object was either made from a flat piece of metal that was round or square and shaped over a stake of mold or it was made from a flat, rectangular piece of metal that was hammered and shaped, the seam brazed and a disc soldered into the bottom. The edge was either rolled from the piece itself, or a ring was soldered to fit. Sometimes edges were left unfinished; sometimes they were crimped.

The creation of the object itself is something that is only understood by experience and can only be done correctly by a mastercrafter. As the metal is pounded with a “raising” hammer it becomes brittle and must be heated or annealed and then cooled to make it easier to hammer and shape. The heat opens the molecules of the metal so that it is more malleable. Dirk would sometimes only work a piece through the shaping. He seemed to take a great deal of pride in the beauty of the copper at this stage, in the rough texture of the surface which has come to be called “warty” and he would then complete the piece with a patina which is primarily red, but yellow and dark browns often mingle with the finish. Interestingly, Dirk favored this particular patina but he did not teach his apprentices or his children the secret. People have tried everything from brick dust to chalk to various chemicals to replicate the effect, but without consistent success.

After a piece was raised, or hammered to shape, it was polished and then it was planished with a finishing hammer that was flat or slightly curved to give the surface the hammer marks associated with hand-hammered copper. The size of the hammer used determined the fineness of the finish. A piece could be worked and buffed until it was entirely smooth, but this was not the effect that was desired at the time. People wanted objects that looked handmade. The article was then cleaned by dipping it into a solution of acid. The final step was to apply the patina which was done with a variety of chemicals and processes depending on the color desired. 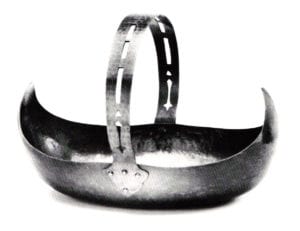 The lamps were the pride of the studio and took intense labor to make. The labor was shared, one crafter making the base and another making the shade. Isenglass or mica for the shades was purchased in sheets. While India was one of the primary sources for mica, it was also found and mined in other areas including the eastern part of the United States. Mica in its natural state is clear, but in processing shellac and alkyds were used to make the sheets more durable. This changed the color of the mica to shades of light yellow to dark brown and orange. The sheets of mica were cut to size and then heated and shaped to fit the inset of the lamp panels.

Earlier lamps made before 1916 are distinctly different from lamps that were made later, and this was most apparent in the shades. The method used to attach the straps to the cap and rim was by riveting them on the outside. In earlier lamps, the rim was cut from one piece of copper. In later lamps the straps were attached on the underside of the cap and sometimes on the underside of the rim. This may have been a cost saving device or it may be simply a design change that seemed more desirable. Sometimes lamp shades have stencil patterns, usually Oriental in design, laid between two layers of mica for an interesting effect. Piercing and cutwork in the metal was also occasionally done on the shades.

Dorothy Lamoureux is a social historian who guest curated the Dirk Van Erp exhibition and has had a special interest in the Arts and Crafts Movement for many years.

All articles by this author
Previous A Replica of the Sutton Hoo Sword
Next Metalsmith ’90 Winter: Exhibition Reviews
Social media