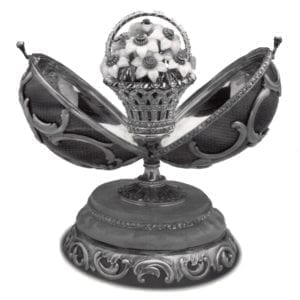 The Curse of the Fabergé Eggs

In our April issue, we reported the 189-piece collection (including 9 Fabergé Imperial Eggs) owned by the late Malcolm Forbes had been sold to Russian billionaire Viktor Vekselberg. At that time, it appeared the collection would soon be on its way to Russia with an astonishingly romantic ending to one of the great stories in art history. It has not played out quite that way, however, it is an interesting story.

At the time of the sale, Vekselberg was not well known in the west. Forbes Magazine ranks him at 147th place on the list of World’s Richest People, with a personal fortune estimated at $2.5 billion. Vekselberg, 47, was born in the Ukrainian town of Drohobyck. After graduating from the Moscow Institute of Transport Engineers, he worked as a researcher and a laboratory director. Following the collapse of the Soviet Union in 1991, he became deputy director of the Russian-American joint venture Renova, an investment group. In 1995, he became a founder of the Siberian-Urals Aluminum Company. Russia’s stockpile of aluminum was dumped onto the world market, resulting in a severe price drop and considerable readjustment of the aluminum industry throughout the world. Some plants were closed, including Florence Enamel, Inc., a sister company of Thompson Enamel, Inc. He is currently chairman of Tyumen Oil, Russia’s third-largest oil and gas company. Vekselberg did not consult Russian officials prior to purchasing the Forbes collection. However, he did have an audience with the Russian Orthodox Church patriarch, Alexei II, who blessed the return to Russia of the eggs, and stated that the repatriation of objects belonging to the last Czar’s family was highly important for the motherland, as Nicholas II and his family have been canonized. Vekselberg created a foundation called Svyaz Vremen, loosely translated as ‘Connection in Time’. His original intention was to have an Easter exhibition of the eggs at the Kremlin, and then send them to St. Petersburg; Yekaterinberg, where the Russian Imperial family was executed in 1918; and the cities in Siberia where his company’s installations are located.

These plans have met with several obstacles and apparently there are more to come. First, the difficulty of exporting the eggs from the United States. Numerous bureaucratic obstacles, not the least of which is the Convention on International Trade in Endangered Species of Wild Fauna and Flora Some of the eggs contain ivory, which come from endangered species. Apparently, the eggs are still at Sotheby’s in New York.

It appears the eggs might not travel inside Russia because of security problems and lack of suitable venues for exhibiting them. Contrary to reports, the ultimate disposition of the eggs has not been decided. The Russian press took a negative approach to the purchase of the collection. Immediately after the sale became public, journalists wanted to know if Vekselberg had paid for the eggs with money from his official Russian accounts, or from his offshore accounts. The web site GlobalRus.ru headlined a story ‘Kitsch Worth $128 Million Will Reconcile Business And Power’. It went on to say the money should have been dedicated to the restoration of crumbling Russian country estates of architectural and historical importance. Other journalists could not resist a play on words offered by the fact that ‘eggs’ in Russian – like ‘balls’ in English – also means ‘testicles’.

Spring Flower Egg, by the Fabergé Studio. This egg, which was part of the Forbes collection and assumed to be one of the Imperial Easter Eggs, was determined not to be, according to paperwork found in Fabergé and Soviet archives after the fall of the Soviet Union in 1991.

The original owners of the Imperial Eggs came to a tragic end. Malcolm Forbes collected many things, but his real obsession was collecting Imperial Eggs. Though he did not come to a tragic end, he engaged in the ‘Fabergé Race’ with the Kremlin, thinking he was ahead for years before it was discovered the Kremlin was actually the winner. In 1985, Forbes purchased his eleventh egg at a Sotheby auction. As the auctioneer banged down the gavel, he declared, “Forbes 11, Kremlin 10”. The next day, the sale was headlined by the New York Times: ‘Forbes 11, Kremlin 10 In Fabergé Race’. When asked if he didn’t have enough Fabergé eggs, Forbes answered with a smile, “Eggs usually come by the dozen.” In 1986, Forbes realized his dream. he acquired the Rosebud Egg in a private sale, and exclaimed, “The home team is still ahead, Forbes 12, USSR 10.” USA Today headlined its report about the 12th egg, ‘Egg-Stravagant’. In 1991, the Soviet Union collapsed and shortly afterwards documents found in formerly secret archives in St. Petersburg, and in the private archive of the Fabergé family, showed that the USSR had won after all. Three of Forbes’eggs were made by Fabergé, but not for the Russian Czars. The score was USSR 10, Forbes 9.

We will have to wait and see how the next ‘act’ plays. From the Russian journalists, we can deduce President Putin is waging an undeclared war against the oligarchs (oil company officials). Last year, an oligarch fled Russia and was granted political asylum in England. Another recently spent $250 million to purchase the British Chelsea soccer club. Some reporters expressed the suspicion that Vekselberg had bought not just eggs, but the equivalent of a papal indulgence that might deflect presidential wrath. Stay tuned

Ganoksin is sponsored by
By Woodrow W. Carpenter [Volume 23, Number 4, August, 2004]
In association with