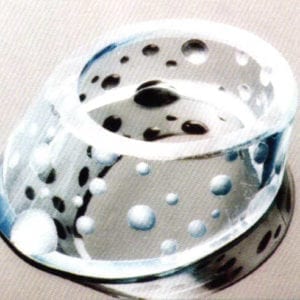 Nature spread gemstones that are suitable for jewelry purposes around the globe with extreme thrift. In most cases, mining and processing them are most laborious affairs. It is therefore no surprise that people started very early on to replicate these beautiful crystals by artificial means. Glass above all was one of the first surrogates used in place of genuine crystals. 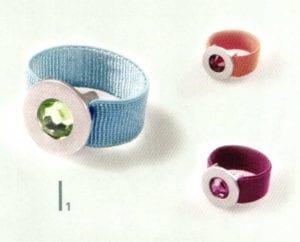 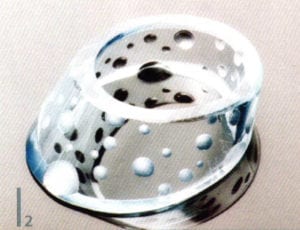 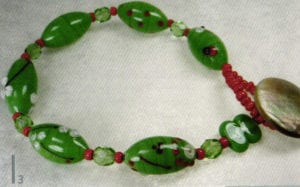 Glass consists mainly of silicon dioxide, therefore the same material as mountain crystal. Quartz sand is the initial ingredient for producing glass, melting at around 1,480° Celsius. In order to lower the melting point and to enhance the strength of the glass, soda, limestone, dolomite or potash are used as additives. Metal oxides are drawn on as coloring agents. For example iron oxide provides a greenish-blue color, while copper oxide creates red. When cooling, glass forms a crystalline structure. But there is also natural glass, for instance, obsidian, created by volcanic eruptions Tectites are a by-product of meteor strikes, and lightning leaves behind fulgurites in quartz sand.

As early as the 2nd millennium BC, people in Egypt and Mesopotamia used glass as jewelry stones. Its significant hardness of 5-7 in the Mohs scale, its resistance to corrosion and its pronounced malleability and suitability for coloring made it an ideal material for precious items. Large quantities of glass jewelry were found in tombs belonging to the 19th Egyptian Dynasty (1,300 to 1,250 BC). At the time, glass replaced the scarcer gemstones such as lapis lazuli, turquoise and carnelian for breast jewelry and finger rings.

The Romans adopted the art of glass production from the Egyptians and brought it to perfection. During the 3rd and 4th centuries AD, they spread this skill northwards throughout their empire. The Germans were so fascinated by the imported glass beads that they named the material with the same word they used for amber, glass (shining, shimmering) Once the Eastern Roman Empire had imploded, Venice advanced to become the centre of the European glass industry. In the 13th century, the glass furnaces from Venice were banished to the island of Murano to the North in order to preserve the jealously guarded secrets of production methods. On pain of death, the glass blowers were forbidden from passing on their knowledge. Right up until the Renaissance, the glass makers from Murano developed breathtaking skill in the production of glass jewelry. At the time, gemstone imitations and glass rings were extremely popular. Miniature mirrors, carved from glass balls with a metal composition on the inside, were worn as jewelry in the 12th and 13th centuries. Glass production also flourished in Germany and France during the 16th and 17th centuries. It was established by immigrant Venetian glass blowers. The Venetian predominance in glass product on was not superseded until the 18th century with the success of cut baroque glass, as the Venetians had no command of this technique, mainly found in Bohemia, Silesia and increasingly also in other parts of Germany. Many stone cutters were located in the Czech province of Bohemia. In the 15th century, they started cutting the glass just like genuine gemstones, establishing the reputation of Bohemian crystal Artistic glass manufactories were founded in the French region of Lorraine. The brand Baccarat, named after the town, still testifies today of the French version of glass crystal art. 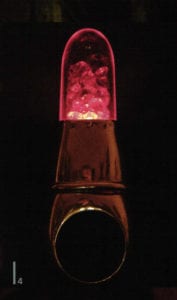 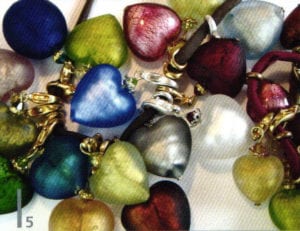 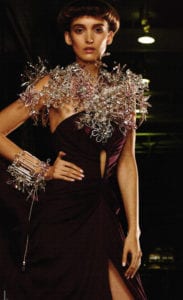 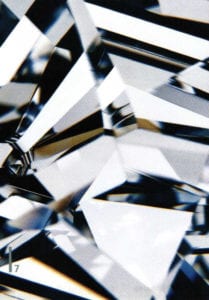 Perfect crystal facets made by Swarovski

The first European seafarers in Africa and America traded glass beads for precious raw materials and even gold and gemstones in their bartering with the natives. There was significant demand for jewelry with opulent stone settings at the court of the French king Louis XV during the 18th century. Around 1730, the Alsatian inventor and jeweler Georg Friedrich Strass (1701 – 1773) therefore turned specifically to the production of imitation diamonds made of glass in his own business in Paris. This produced such strikingly genuine-looking replicas that he was granted the right to use the title Jeweler to the King in 1734. ‘Strass’ entered common parlance as a synonym for diamond imitations. The Strass stones contained lead tetroxide, which prevented the unwanted greenish discoloration of the glass; in most cases, the lower part of the stone was ‘foliated’, or in other words was coated with a mirroring layer. Combined with the facets, this led to a fascinating refraction of light. Even today, Strass stones are popular in fashionable designer jewelry. They are usually vaporized with metal oxides. Using the copyrighted name Strass, Swarovski now distributes glass elements, above all for architecture and lighting.

Ganoksin is sponsored by
th century. Around 1730, the Alsatian inventor and jeweler Georg Friedrich Strass (1701 – 1773) therefore turned specifically to the production of imitation diamonds made of glass in his own business in Paris. This produced such strikingly genuine-looking replicas that he was granted the right to use the title Jeweler to the King in 1734. ‘Strass’ entered common parlance as a synonym for diamond imitations. The Strass stones contained lead tetroxide, which prevented the unwanted greenish discoloration of the glass; in most cases, the lower part of the stone was ‘foliated’, or in other words was coated with a mirroring layer. Combined with the facets, this led to a fascinating refraction of light. Even today, Strass stones are popular in fashionable designer jewelry. They are usually vaporized with metal oxides. Using the copyrighted name Strass, Swarovski now distributes glass elements, above all for architecture and lighting.

The Austrian Daniel Swarovski (1862-1956) was also searching for the perfect crystal for jewelry purposes. At the ‘First Electrical Show’ in 1883 in Vienna, the Bohemian-born inventor discovered inspiration for an electrically-powered machine to grind crystal glass. In Austria, farmers generally ground the glass stones by hand as a secondary source of income. Swarovski registered his grinding device for a patent in 1892 in Prague, thus initiating a new era in the production of jewelry stones. His mechanically-ground stones were of a high quality and were quickly accepted by the local and international jewelry markets as “jewelry stones of new quality.”

The Parisian fashion industry above all was thirsting for these perfectly cut crystals, which, under the name ‘Pierres Taillees du Tyrol’ conquered the world from the company headquarters in Wattens, Austria. This launched a close cooperation between Swarovski and the fashion industry which has persisted until today. For example, the company has enjoyed a close partnership with Christian Dior, which even saw the creation of a separate crystal stone during the fifties. The ‘Aurora Borealis’ shimmered in the colors of the rainbow and was therefore named after the Northern Lights. Even today, leading designers are pleased to draw on this crystal. 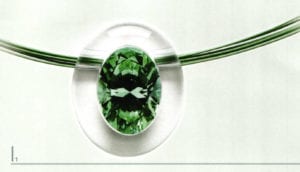 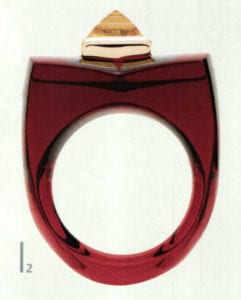 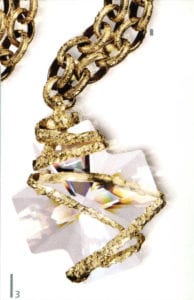 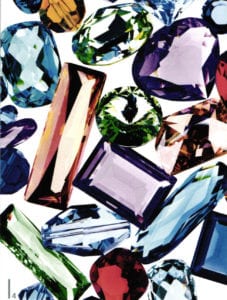 Skilful fushion of textile fashions and jewelry: dress by Igor Chapaurin with Swarovski crystals at the Runway Rocks Moscow show at the end of November 2007

Major names such as Yves Saint Laurent, Armani, Chanel, Versace, Gucci and Prada, and even Alexander Mc Queen or Vivienne Westwood use the jewelry stone for their designs. In this way, clothing and jewelry have grown together. Stars such as Marlene Dietrich, Audrey Hepburn or Madonna dazzled the audiences on red carpets around the world with their extravagant avail of crystals. Through fashion designers, jewelry makers also discovered the Swarovski crystals for their opulent creations.

Nevertheless, glass still remains only a conditional replacement for gemstones. Scientists have, for a long time, been looking for ways to culture genuine crystals. They should have the same properties as their natural pendants and should be of uniform quality and color. They have not yet found the alchemists stone, but they have succeeded in culturing gemstones in the laboratory. In 1890/91 , the French chemist August Verneuil (1856-1913) succeeded in creating crystals in his Parisian laboratory, drawing on the flame melting or melt drop method. The raw material is melted at temperatures of around 2,000° Celsius. It forms crystals on a base and gradually assumes a pear shape, the melting pear. These melting pears can reach weights of 200 to 500 carats. These days, synthetic gemstones are produced using this method. At the start, Verneuil mainly produced rubies. He introduced synthetic sapphires in 1910, followed by transparent corundum, called diamondite, as well as yellow, green and alexandrite-colored stones. These days, the Verneuil method is principally used to produce rubies and corundum. Oxides or metallic salts are added to create color, e.g. chromium for red, nickel for yellow.

Synthetics and crystals not only made jewelry more democratic. They also lent entirely new freedoms to design in its dealings with the beautifully sparkling objects. Many exciting clothing and jewelry designs would never have been possible if the inventors of synthetic stones or glass crystals had not lived.