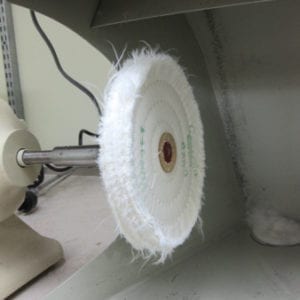 Myth: Singeing buffs to prep them is faster and more effective than raking them. 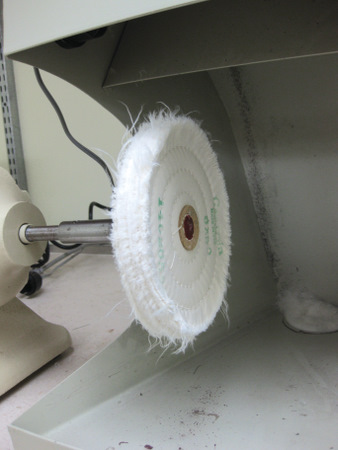 Resetting the stopwatch and turning on ventilation, I sat down at my soldering bench to prepare my second buff by singeing. I quickly passed the surface of the new buff through a small gas-only flame on my Little Torch. The loose threads burned down to the surface of the buff, and I pressed the singed surface firmly on a piece of leather to stop the smoldering. I rotated the buff and continued this process until I had singed the entire surface. Making sure that there were no remaining embers or hot spots, I put the buff on the polishing motor and quickly raked the surface to loosen any more stray fibers. I then returned to the soldering bench to repeat the process. It took three repetitions to achieve a consistent surface free of stray threads, and the entire operation took a little less than 10 minutes.I started with the raking technique. My polishing motor is rated for 3,450 rpm and has only one speed. Using an old fork and moderate pressure, I raked the buff until the worst of the shedding stopped and most loose fibers and lint were removed. This took about two minutes and left a great deal of dust and debris both on me and in the back of the dust collector. I then used a very sharp pair of scissors to trim all of the loose ends that this operation pulled out of the buff. I returned the buff to the motor and repeated the raking process one more time to remove any stray fibers. This time, there was considerably less debris, and I was left with a nice fluffy buff with a fairly consistent surface free of stray threads. The entire operation took a little less than 10 minutes. 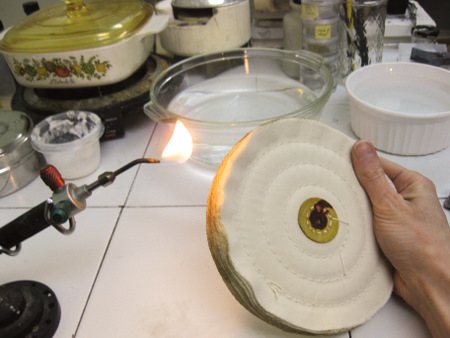 It is very important to critically assess the strengths and weaknesses of the ventilation at both the soldering and polishing areas. A lack of adequate ventilation in either area presents risks, in the form of dust and debris ­(with raking) or smoke (with singeing). Moreover, there are inherent risks when you attempt the controlled burn of any flammable surface. In terms of health and safety, the best approach really is the one that your shop environment is equipped to support.The results. In terms of efficient use of time, neither of the two approaches distinguished itself as a clear winner, but I did make a number of observations that might help someone decide which approach is best for them.

Actually putting these buffs to work provided additional valuable information. I cut out a number of copper squares and labeled them S1-S4, to be polished with the singed buff, and R1-R4 to be polished with the raked buff. Using Tripoli, I spent just over a minute buffing the surface of each sample and noticed a clear difference in the quality of the surfaces produced by the different buffs right away. To the naked eye, the singed buff produced a much brighter surface, while the surfaces created by the raked buff were notably duller with distinct directional marks left by the buff itself. There also appeared to be more compound built up on the surfaces of the pieces that were polished on the raked buff.

After a quick dip in the ultrasonic, I examined all of the samples again, this time wearing an Optivisor with a number 7 lens. While it was clear that the dull surface on the raked samples was, at least in part, a function of the buildup of compound on the metal, it also became apparent that the singed buff really did produce brighter results. What was also interesting was that the fourth and final sample processed with the raked buff appeared marginally brighter than the first few.

That said, when I compared the results between a buff prepared by singeing and a buff prepared by raking that had both been in service for a prolonged period of time, the differences in the quality of the surfaces had largely disappeared. I was always told that singeing a buff’s surface serves to cauterize the threads, leaving each little end smooth and resulting in better results immediately. However, the build up of greasy compounds over time achieves the same ultimate result: smooth ends on individual fibers.

In the end, it seems clear that singeing buffs improves initial performance. While perhaps unnecessary for buffs used for pre-polishing and cutting operations, the difference really shines through for final polish steps. It seems to me that this is an old-fashioned habit with real merit.