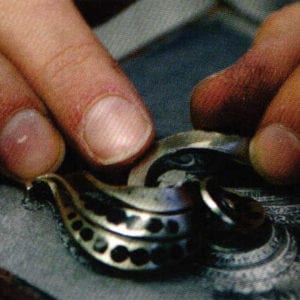 Even if France is not offering the same high level of education in fine jewelry making as in certain other European countries it is still the land of reference when it comes to technique and creativity.

Two colleges are named time and again by professionals when it comes to fine jewelry: the Boulle college (courses offered at the Nicolas Flamel college) and the BJO, on the rue du Louvre. One is a state college and the other private yet both offer state diplomas which are well recognized within the profession. 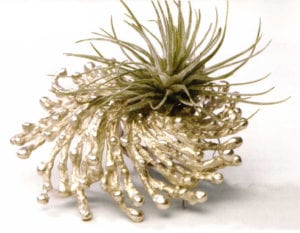 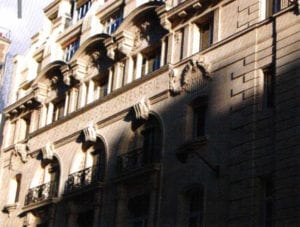 Front of the BJO training college, rue du Louvre, in the heart of Paris 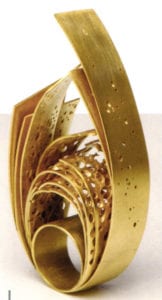 The Boulle college: a superior and international education

This college was established in 1886 by the artists of the Faubourg St Antoine to pay homage to the famous 17th century French cabinet-maker, Andre Charles Boulle, and now passes on this expertise in the artistic professions to its students. The Boulle college is divided into three sections: the Design course which provides training in the profession of being a designer; the Applied Arts course which trains students in how to design furniture and space (interior design and environmental design) and in visual expression; the Artistic Professions course which covers professions as diverse as cabinet-making, carpet making, engraving, sculpture… and fine jewelry. This section, known as Jewelry and Jewel Art, is studied at the site of the Nicolas Flamel college and offers students three levels of study: the CAP vocational training certificate (completed in two years), the BMA artistic professions certificate (completed in two years) and the DMA artistic professions diploma (again completed over two years). The college is the only one in Paris to offer DMA level, which is equivalent to the baccalaureate + 2. If students complete the entire training course, from the CAP to the BMA, they will have accumulated six years of professional training in fine jewelry making.

The college’s specialty: the international class

The Boulle college has been actively involved in constructing a European education and training zone through the Socrates/Erasmus and Leonardo da Vinci programs for the last ten years. The college encourages its students and lecturers to open their minds by living abroad, either through a company placement or by completing a master’s program abroad in one of the European higher education colleges or universities. Since 2002, Boulle college has expanded its network of partner institutions by joining the Cumulus network (www.cumulusassociation.org) which brings together 124 institutions across the world. It has therefore created an international class which admits some twenty students to DMA courses in all different areas. In the Jewelry and Jewel Art section, students from the University of Pforzheim and the Royal College of Art in England are selected based on their portfolios. They then receive very thorough training: French language in partnership with the Universite Sorbonne Nouvelle, the history of art, CAO IT, artistic expression (design), technology and, of course, jewelry-making workshops.

Bruno Schachtel, director of the ESSA Boulle, describes the establishment as “the college of knowledge, of ‘savoir faire”‘. It is this place of living, learning and developing inter-personal skills that the lecturers hand down to their students, following the example of those who taught them and retaining tradition in its purest form. This school of designers along with its creative processes and lecturers also develops with students to ensure that the Boulle college keeps pace with contemporary developments. 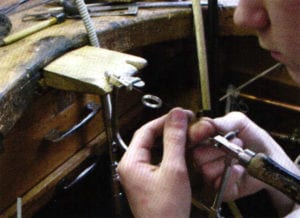 Updating work at the BJO 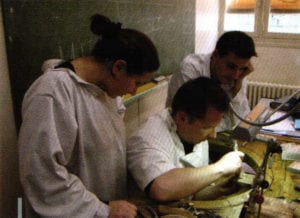 The workshop leader surrounded by students at the BJO 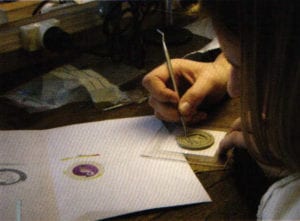 Design and working with wax at the BJO 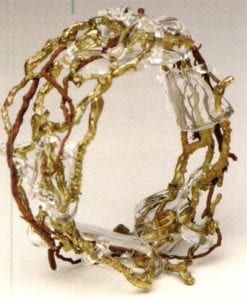 ‘Root’ bracelet made from wood, glass and brass by Laure Boulard who graduated in the Artistic Professions of Jewelry and Fine Jewelry in 2006 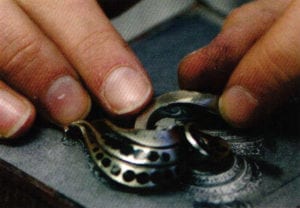 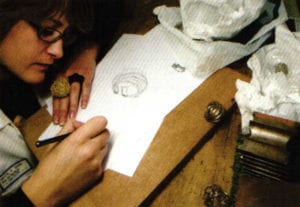 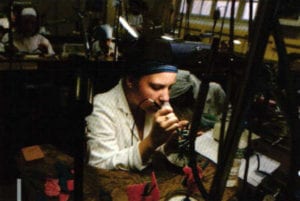 Workshops at the Boulle college for the Artistic Professions of Jewelry and Fine Jewelry course, held at the Nicolas Flamel college

This private establishment was founded in 1867 by the Chambre Syndicale de la Bijouterie et Orfevrerie (Committee for Jewelry and Gold and Silversmithing) which is now known as the Union Franqaise de la Bijouterie, Joaillerie, Orfevrerie, des Pierres et des Perles (BJOP – French Union for Jewelry Fine Jewelry, Gold and Silversmithing, Stones and Pearls). The establishment was created by professionals to respond to the needs of companies. “The illustrious Frederic Boucheron, then a member of the corporation, was one of the first pioneers of the college”, recalls Bruno de Coupigny, the current president of the colleges of the rue du Louvre and former secretary general of Boucheron. “Our aim is to prepare the students for the labor market; the leitmotif is ’employability’. We work upstream with the companies to identify their personnel needs as well as their level of technical development. We conduct ongoing technological monitoring”.

The BJO training is aimed at different types of students: students starting a two year training course for the CAP in the Artistic Professions of jewelry and fine jewelry making with the option of taking another two years for the BMA; the student training center which enables students to work on block release while following a two or four year training program; ongoing training offering A la carte courses for adults who are either seeking employment or for companies looking to provide their workers with more in-depth training in a certain discipline The courses are composed of a range of different disciplines: design, polishing, stone setting, engraving, gold and silversmithing and gemology. The key modules are: the gouache classes which involve design techniques, aiming to accurately represent volume and substance through managing color subtleties. The college has some twenty or so computers available to students for computer aided design work (CAD), in addition to learning design by hand. Using two software programs, students can view a spatial representation of their works. Items are also produced in wax and metal during workshops to create 3D representations. Around 500% of the work time is dedicated to workshops to bring together the technical aspects of jewelry making: marking out, cutting out, sawing, filing, fitting, stamping, pressing and assembly techniques: soldering and brazing. 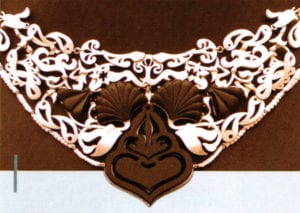 ‘Arabesque’ necklace made by 1st year CAP students at the BJO 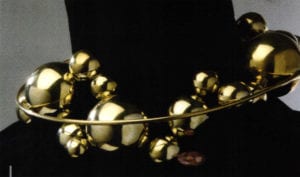 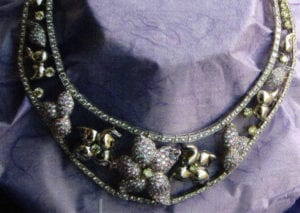 ‘Pastel’ necklace made by BMA students at the BJO 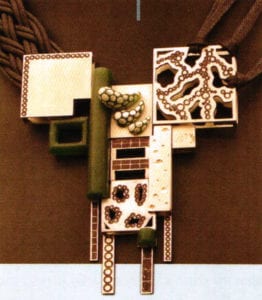 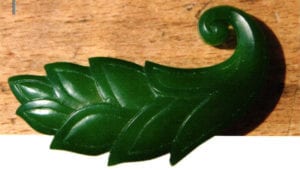 A work represented in wax (BJO)

The college’s specialty: sponsorship from the high jewelry brands

The college, which is always in close contact with the employment market, has established exclusive partnerships with the stores of the Place Vendome. These labels – which currently include Dior, Boucheron, Piaget, Louis Vuitton and Fred – have been supporting various classes for the last four years. Prizes are awarded for creation and technique. Sometimes, students can even see their works introduced into a collection, as was recently the case with Piaget. This sponsorship provides students with concrete motivation as well as making them aware of the requirement for excellence. “At the end of the BMA, we would like to suggest the creation of items made from precious metals so that we can keep up with the realities of the market even better,” says Bruno de Coupigny. “We are also thinking of developing additional studies for the DMA. Where foreign students are concerned, we only have a small number and it is a matter of a personnel-based approach. We hope to prioritize quality teaching in France as this profession has a promising future when it comes to fine jewelry par excellence. The quality of the finish and accuracy of the setting are both features which determine ‘French quality’. Last year, the BJOP also established the ‘Joaillerie de France’ (French fine jewelry) label which guarantees the quality and origin of manufacture. Our college is determined by this same spirit of excellence”.

All articles by this author
Previous Peru: The Past is Always Present
Next Atelier Gilmar: There was the Idea
Social media