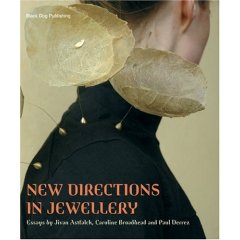 by Marjorie Simon
Ganoksin may receive customer referral fees from the companies listed in this page. Learn more.

Two new European jewelry books crossed my desk this summer. One offered an uneven survey of jewelry concepts and the other strong work, beautiful production values, and thoughtful scholarship.

Claiming to be “a presentation of the numerous ways in which [jewelry] is developing,” New Directions in Jewellery fails to deliver on its promise of “considerations of material [that] intersect with conceptual theses.” Its strength, however, lies in the introductory essays by Paul Derrez, owner of Gallery Ra in Amsterdam, Jivan Astfalk, German-born goldsmith who teaches at the University of Central England in Birmingham, and Caroline Broadhead, groundbreaking British artist of the 1970s whose textile-based designs challenged existing notions of adornment and theater.

In a too brief statement, Derrez discusses new work from mostly Western European artists. He gives a concise history of the truly new, from the 1970s to the present, recalling the familiarGijs Bakker, Lam de Wolfand introducing the unknown, a “German-based group Chicks on Speed…engaged in music and performance but also clothing and jewellery, using a punk, DIY aesthetic.” He speculates about the reasons for the lack of strong production work in recent years, and on the influence of “street fashion.”

Although jargon heavy, Jivan Astfalck’s essay also positions jewelry in its numerous guises and offers examples of jewelry at the edges of concept and taste. Like body adornments such as piercing, or some of Norman Cherry’s subcutaneous implants, Ted Noten’s chewing gum brooches, cast from “life,” exist at the edge of revulsion. Asserting the legitimacy of jewelry as a fine art form, Astfalck looks for “integrity of enquiry, knowledge of contemporary cultural issues, confidence in using artistic strategies.” It is left for the reader to question whether the author’s placement of precious, traditional earrings on stuffed animals really “reconfigures” the jewelry. Statements such as these point to a promise not kept in matching the level of work to the level of inquiry

Astfalck’s definitions and expectations for jewelrya “shift in the referential status, which takes place in the transition of the image as replica to the image as fiction”could apply to any number of media or modes of expression, and this is the good news. She treats the body as any other referent, and dares to create expectations for jewelry that are no different from any other art form, all the while cognizant of the specificity of the body.

Caroline Broadhead addresses the difficulty of nomenclature and explores the relationship between the object and the bodywhy body “adornment” isn’t enough to describe what contemporary jewelry is or can be. She foregrounds the corporeal body, and raises the issues of physical and metaphysical boundaries vis-a-vis the ornament with some particularly provocative clothing from Adele Lutz and Suzanne Hammer. She uses the wonderful phrase “objects…active at the boundary of the body” and locates jewelry at the “junction of the personal, social, and cultural.”

Broadhead’s examples truly push the edge of the jewelry envelope in their use of bodily materials. Mona Hatoum’s Hair Necklace takes the form of an outsized classic bead or pearl necklace, with graduated balls of the artist’s own hair, displayed on a classic Cartier bust. Clearly referencing Victorian hair jewelry, they are creepy, but miles beyond Nanna Melland’s necklace of a year’s worth of nail pairings cast in gold. On the other hand, Millie Cullivan’s ephemeral “lace collar.” the pattern of white dust or talc blown through lace onto bare skin, achieves permanence through the photograph. There were some surprises and some real innovations too. I was glad to learn of Hilde De Decker’s experiments with vegetables and Kristina Apostolou’s “textile-based necklaces and bracelets” that gave a nod to Broadhead’s own work a generation or more ago. Some of the jewelry presented as new may be new only to the author(s). Laura Bates’s dyed nylon origami offers a fresh look at an “alternative” material that nicely complements Svenja John and Helen Britton’s use of plastic, although neither of these artists is included. Though I take issue with some of Broadhead’s statements and examples, her overall essay is most welcome, and forms, with the other two essays, a penetrating inquiry into the meaning of “jewelry.”

The book’s flaw is that the work shown isn’t up to the level of the text and the selection of artists is lopsided. Although the title doesn’t specify this, more than three quarters of the artists live and work in the United Kingdom. About a dozen more were scattered around Western Europe, three were from the United States, and none were from further east than Germany. It feels as if three respected theoreticians were brought in to elevate a student project. The eight organizing categories are given catchy two-word titles, sound bites instead of information. Unfortunately, the selections in “Fashion Forward’ are not the best examples of the iconoclastic young British presence in fashion, some of which was documented in 1997 in Unclasped, A Survey of British Jewellery, by the same publisher.

By contrast, everything that was missing from New Directions showed up in Contemporary Jewellery: The Padua School, by Graziella Folchini Grassetto. Writing in Italian with an excellent English translation by Gus Barker, the author explores traditional and innovative goldsmithing in Padua, from the sensuality of Mario Pinton, to the modernism and geometry of Francisco Pavan and C ampaolo Babetto, to the sublime Barbara Paganin.

Fritz Falk, former director of the Schmuckmuseurn Pforzheim, opens his introduction by quoting Guido Gregoretti, who declared in 1983, ‘art jewellery ranks as a fine art… It is one form of visual art among several….” Falk defines “The Padua School” and emphasizes the significance of a school’s founding teacher, naming among others Hermann Junger at Munich Academy, and David Watkins and Michael Rowe at the Royal College of Art in London. In Padua, the great Mario Pinton began teaching at the Instituto “Pietro Selvatico” in 1944. But it wasn’t until 1955, when he was joined by Francesco Pavan, that the “Padua School” really began to take shape, aided in 1969 by the addition of Giampaolo Babetto. Notably, all the goldsmiths at the school were born in or near Padua, so the name came to signify a sort of community, with roots deep in an Italian goldsmithing tradition dating to the ancient Etruscans.

Grassetto informs the reader that the Padua goldsmiths first gained recognition outside of Italy, becoming part of international design, and thus infusing new ideas from other venues. She identifies the elements of Pinton’s aesthetic that were so influential, stemming from his exposure to design from Milan and Vienna. The images illustrate principles and trends as well as examples of what can be accomplished when a strong design aesthetic is wedded to complete technical mastery. For example, the Instituto Pietro Selvatico was “intended to reaffirm the, values of craftsmanship that had been undermined by the development of modern industry.” Plane and solid geometry was part of the curriculum, with a far-reaching impact on design over decades. Experimentation involved geometry, space, and movement, not materials, although Pinton did re-introduce niello into the modern jewelry vocabulary.

The emphasis on geometry was picked up by Giampaolo,. Babetto, student and then teacher at the Pietro Selvatico, in fluid necklaces with interlocking repetitions also seen in contemporaneous silver from the Jensen atelier. Grassetto brings to light other artists less well known here, such as Paolo Maurizio, who created folded linked necklaces of colored titanium in a Pavan-esque style.

As each decade unfolds, design evolves, as Kineticism of the 1960s gives way to Minimalism in the 1970s and 1980s, perhaps best exemplified by Babetto’s simple geometry. American sculptors such as Donald Judd and Sol LeWitt are invoked as reference points. The author sees Babetto as a bridge between the Italian tradition and developments in Munich, Pforzheim, and the Netherlands.

In the 1990s a very young Giovanni Corvaja paid homage to Italy’s rich artistic history by his imaginative use of the ancient Etruscan art of granulation, once lost, then revived by the Castellani family in the nineteenth century. Of the same generation, Stefano Marchetti, like Pavan a decade before, ‘draws” with colored gold. Another new designer, Annamaria Zanella, adds a bold new stroke with pigments, enamel, and resins for color, in loosely rendered geometric forms.

Patiently, decade by decade, Grassetto unpacks the salient elements of the Padua School over 40 yearsthe fundamental place of geometry and inadvertently, its relation to the human body in terms of scale, the traditional use of gold and its “opposite,” niello. She includes documentation of past exhibits and biographies of featured artists. Every aspect of this book is handled with authority, integrity, and intelligence — it provides a useful model of what scholarship about jewelry can be.