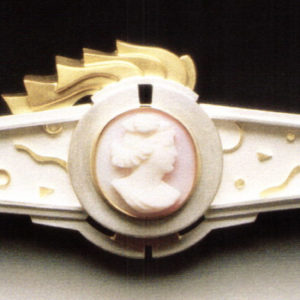 So much of contemporary culture is filled with apropriations, reconstructions, and fragmented borrowings from our past that that past seems a fiction, collapsed, confused, fragmented, ersatz, little more than a Disneyland filled with costumes and painted flats. Such arch mining of earlier times maintains a cool detachment, objects are removed from their original contexts and collaged arbitrarily onto the present. The original meanings and significances of things float untethered in a sea of images and forms. 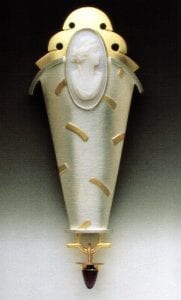 Bill Ruth and Susan Mahlstedt, however, evince a more recuperative attitude toward the past and its patinated forms. These collaborators lift a beautifully carved cameo from its original setting and give it new life, not in a postmodern pastiche, but in a contemporary revival, like a careful and sensitive, but practical, remodeling of an old house. Their forms may recall military medals, the tinned wings of a Junior Birdman, or the awards we might have received for winning a spelling bee, back when it was thought essential to spell correctly. These tokens are not reconstructions of objects from some earlier time; they are new constructions of the present that have the power to elicit feelings that we may have thought lost or corrupted by the commodification of nostalgia. 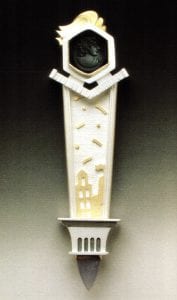