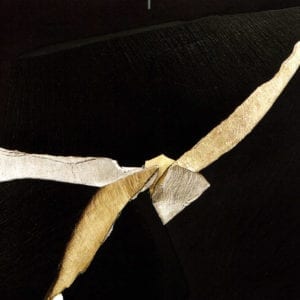 Many galleries have tried to exhibit artistic jewelry in the past, but only few remained. They have gained international reputation and have already all celebrated their tenth anniversary, thus becoming an “institution”. 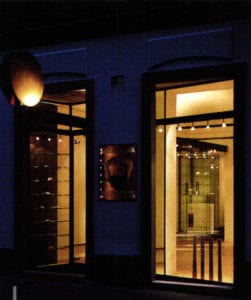 View of the gallery Slavik with its permanently rotating bronze disc

Quite a lot of Austrian galleries are showing artistic jewelry once a year, mostly aiming Christmas time and giving designers the chance of a commercial success. But altogether there are only three ones dedicating themselves to jewelry all the year round and even having gained international reputation. Two of them, Slavik and V&V can be found in the metropolis of Vienna, one is situated in the province of Carinthia at the “Worthersee”, one of the most beautiful lakes in Austria’s alpine scenery. 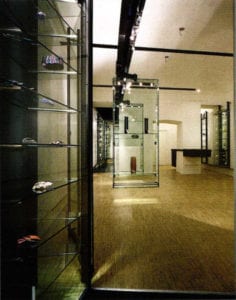 The fashioning of a new Viennese jewelry gallery was taken as an opportunity to realise a completely new architectural construction for jewelry presentation. Thus the Gallery Slavik can be seen as a pilot project in a certain sense. As everywhere there is naturally also the danger in the design and construction of jewelry stores and jewelry galleries of becoming trapped in the schematic-conventional. New, actually revolutionary paths were entered by the architect. The task was, to design a gallery in a landmark-protected house in Himmelpfortgasse 17, in the centre of Vienna. There were three differently sized rooms in the historical building. They were connected by large, fixed elements, two long, straight wall boards and a steel rail. These elements take on different functions. The steel rail, as the longest element, just cuts through the opening door onto the street and supports a bronze disk, which appears to roll on it. Slideable and slewable glass showcases are hanging from the rail. The rail also carries the variable lightning. None of the fixtures touch the floor, not even the expandable showcase table, which connects two rooms. Should the street-side part of the gallery have to be kept free for some occasion, all of the showcases can be pushed along the rail and the wall boards to the back part of the gallery, just like in a train-station. 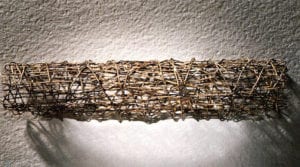 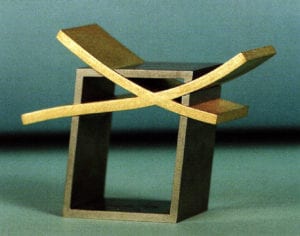 It is the aim of the gallery, showing international artistic jewelry of renowned artists, like Jacqueline Ryan from Britain, Yasuki Hiramatsu from Japan, Michael Becker from Germany, Joaquim Capdevilla from Spain or the Austrians Wolfgang Rahs, Helfried Kodré and many others. In any way or the other they are considered being traditional guests at the gallery, returning in a rotation with other well known artists from other countries and their own native countries within a period of three years. 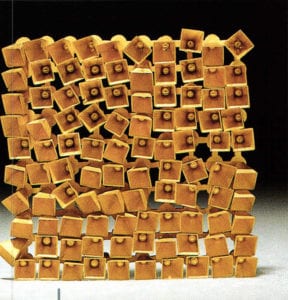 Jacqueline Ryan is one of the traditional guests at gallery Slavik. Brooch, 18 karat yellow gold 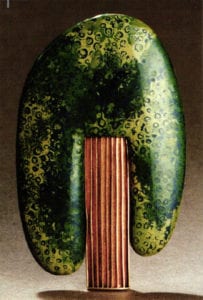 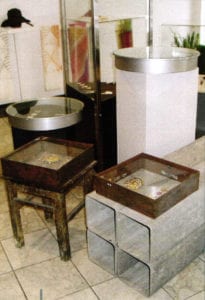 The interior of the gallery V&V. Showcases are changed, depending on the character of the exhibition (Israelian jewelry art)

V&V, now having found its new domicile in the centre of Vienna as well, at Bauernmarkt 19, for more than a whole decade, has already started at two other locations at the beginning of the eightieth. It always has been the aim of the gallery owner to present avant-garde and experimental jewelry, also on an international basis. There is more a change in the exhibiting artists. New talents get the possibility of a start up. Often jewelry is aiming its possible limits. Some of the exhibitions lead to fierce discussions about what jewelry is, could be, may be,… In between also thematic exhibitions are shown, giving a new interpretation of jewelry. V&V is communicating with other galleries and jewelry schools and is sponsoring exhibitions of foreign artists on residence in Vienna, having achieved a scholarship for working in the metropolis for one or two terms. Altogether it is the meeting point of the younger generation of designers and even those who still stick to avant-garde and experiment although they have advanced in age.

The chains made by Susanne Hammer, Austria, are part of the permanent collection of V&V 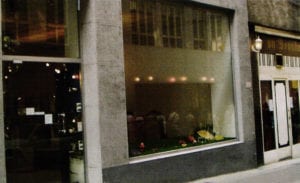 Shop window of the gallery V&V 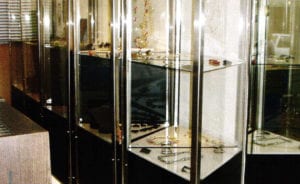 Permanent exhibition in the background of the gallery V&V 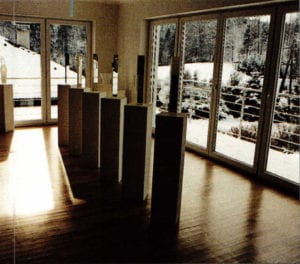 Gallery “Ars Temporis” with a glimpse of the mountain scenery

The attitude of the third gallery, “Ars Temporis” in the federal province of Carinthia is quite different to the companions in Vienna. The gallery owner had started successfully in the capital of Carinthia, Klagenfurt. But more than a year ago she moved out of town, to Reifnitz, lust in a fifteen minutes car-ride range from her former domicile. She tries to combine different arts in the subsequence of her exhibitions. Two times a year she has only jewelry on display – in spring and in early autumn. Her second attitude is to create a continuity between the arts and to find jewelry designs having a connection to nature in their works, in spite of the gallery being embedded within a fantastic lake- and mountain scenery. 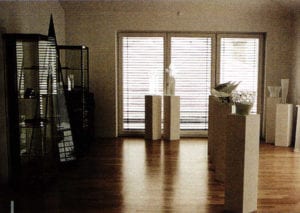 Interior of the gallery “Ars Temporis” 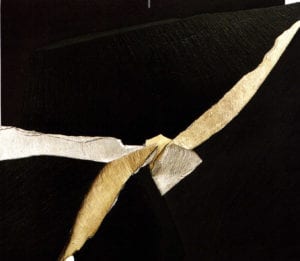 The sculptural designs by the Swiss Kurt Neukomm showed an excellent integration into nature when exhibited. Relief with integrated jewelry, slate, gold, platinum, diamond and opal