As the saying goes, it took James Kaya almost two decades to become an overnight sensation.

The Boston-based jewelry designer has spent his lifetime creating jewelry, starting as an apprentice at the age of eight, and has built an avid fan base among his customers. A few years ago, he decided to enter some design competitions and struck gold, so to speak. The awards starting flowing in, including his latest: first place in Colored Stone’s 2007 Reader’s Choice competition. 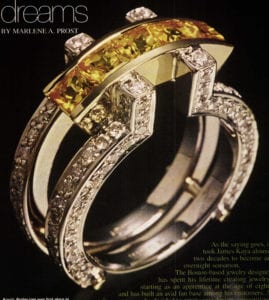 Kaya’s unique settings are described as modernistic, sculptural, and even industrial-looking. Indeed, architecture and three-dimensional metal forms are his major, lifelong influences. But his designs are far from mechanistic. Kaya combines metal with brilliant colored stones and diamond accents to create evocative works of wearable art that represent highly personal, even dreamlike images. That’s why his work inspires reactions like these, from Reader’s Choice voters: 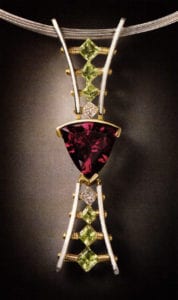 “James Kaya has a fantastic flair for truly emotive jewelry. Beyond gems and metal, the architecture of each piece is a heartwarming/bonding adventure,” says Danielle Johnston.

“[I] love the sculptured look, engineered designs, [and the] contemporary but Victorian and Deco feel to some parts. [It] makes you stop and look from all angles. Beautiful,” says Diane Rice.

Kaya prides himself on his process as much as his design. Each piece is handcrafted. He sketches and renders his designs and fabricates them himself with bench tools and the assistance of three jewelers. His sketches are so integral to the process that they are featured on his commercial Web site (wwwjameskaya.com). 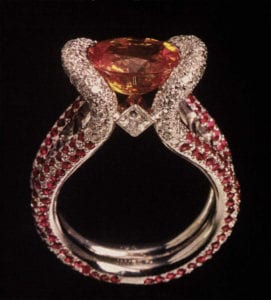 “I don’t use anything sophisticated. . . . I don’t cast. It’s not as clean as [when you] hand-fabricate,” he says. His work is one of a kind; if he is asked to repeat a design, it is crafted from scratch. In a concession to technology, his jewelers are starting to work with computer-aided design. “I render on paper, [but] we’re moving into that area.”

Kaya has nurtured a lifelong fascination with metal. “I basically loved metal [from a young age]. I was always fascinated with how humans bend metal to shape,” he recalls.

Raised in Turkey, he worked after school as an apprentice to a French-trained jeweler who trained him, in turn, in classic jewelry stylings. With little interest in school, Kaya looked forward to the hours of cleaning and helping out, until, at the age of 12, he was allowed to cut his own pieces.

Kaya moved to Boston at 18, and his cousins found him a job with a retail jeweler. Within two or three years, he was making his own jewelry, and he eventually established his own studio, Solair Jewelers. He has remained in Boston, on historic Washington Street, resisting the argument that he would never get any attention unless he relocated to New York. 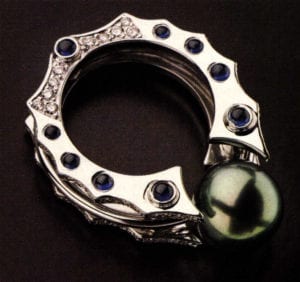 The Total Eclipse, set with a Tahitian black pearl, blue sapphires, and diamond accents, was a finalist at the 2006 Saul Bell Design Awards; photo by Jim Lawson.

Over the years, Kaya has moved beyond the ornate design stylings he grew up with. “All my life, I always worked on detailed French work,” he says, like “French-looking Armenian crosses.” His goal now is to create modern, contemporary designs and push the limits of his inspiration.

Much has been made of Kaya’s artistic roots in Armenian culture, particularly the influence of ancient Armenian architecture on his structural vision. But he considers the association beside the point. He is a modern American artist, with a personal vision all his own.

Architecture does remain a major influence; that’s one reason he is not particularly inspired by nature. “I’m much more into architecture. Nature is more soft; I don’t like leaves. I don’t try to make flowers and that kind of stuff. I like architecture, the simpler the better. . . . I love simple sophistication.” 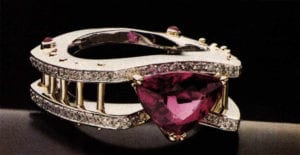 A one-of-a-kind ring with a 3.23-ct. pink tourmaline center stone with diamond and ruby accents; photo by Jim Lawson.

While his first love is metals, he is also passionate about colored stones. His signature style is the melding of geometric forms and spectacular gem centerpieces.

“Diamonds, for me, are boring at some point. [Gemstones] are colorful and much more rare than diamonds. I go crazy for colored stones. I design around them. I have worked with all kinds, [from] opals to tanzanite,” he says. His designs typically feature one exquisite colored stone with diamonds as generous accents.

The result is often emotionally evocative. It is not surprising to hear Kaya’s designs described as futuristic or mystical, with an industrial edge.

“I have been floored by James Kaya’s ability to fashion unique, contemporary jewelry that still manages to have an air of mysticism about it,” says Reader’s Choice voter Keri Holeyfield. 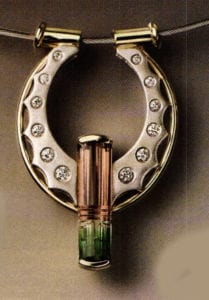 A one-of-a-kind pendant with a bicolor tourmaline center stone set in 18K gold with diamond accents. Photo by Jim Lawson

Kaya admits that many of his designs are inspired by his dreams.

“My jewelry is [like my] heart and soul. They tell stories.” Such as? “I want to keep it to myself,” he demurs, adding, “I try to interpret my dreams, my feelings. That’s why I don’t want [to tell].”

He does share the inspiration for Total Eclipse, a gold/platinum finalist in the 2006 Saul Bell Design Awards (he won the same award in 2005). “It was like my dream. I used to see me on the beach with the sun going down.”

The setting sun is recreated by a large black pearl, with diamonds and blue sapphire cabochons on the side. “The blue cabochons represent water, [they’re a] little bubbly; the diamonds, the sand on the bottom.”

He also has his own private numerology; numbers are symbolic to him. For example, he designed a signature engagement ring with seven stones because ” ‘Forever’ has seven letters.” 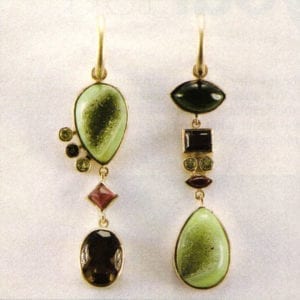 Besides the Saul Bell Design Awards, Kaya’s major awards include first place in platinum distinction for both the 2005 and 2006 American Vision Awards; second place in the American Vision Awards professional category in 2005; the Mort Abelson Award in 2005; and the “New Designer of the Year” title of the International Jewelry Designer Guild in 2005.

Kaya is also private about his clients, who include a very well-known and eccentric classic rock star for whom he is currently designing a leather bracelet with diamonds.

“I’m very happy where I am,” says the designer who refused to uproot himself from his first home in America. “I don’t want to grow too fast. I don’t want the quality to go down.” 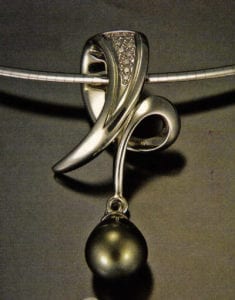 Colored Stone’s fourth annual Reader’s Choice Award competition produced a group of designers with unprecedented talent. This year’s finalists received votes from more than 1,700 visitors to the Colored-Stone.com Web site. Although first place can only go to one designer, the finalists below also turned heads as our runners-up:

“By 1975, I had completed my fundamental studies in jewelry design and began experimenting with various metals and techniques,” says Janis Kerman. “I knew that jewelry making was my direction, my métier. Two years later, Janis Kerman Design was established. The focus of my work for the next 10 years was the design and production of limited edition collections, detailing for fashion accessories and unique pieces. Though I enjoyed the production years and the fact that my designs were available to many, my need to focus on unique pieces was determining the next era of work. Since 1986, I have been working exclusively in precious metals, gems, and experimental materials,” adds Kerman.

“I am inspired by the form, colors, and textures of objects both artistic and common: architecture, furniture, paintings, ceramics, fashion. . . . My work is based on geometric shapes — their inherent strength, applicability, and timelessness command my respect. Balance rather than symmetry.” 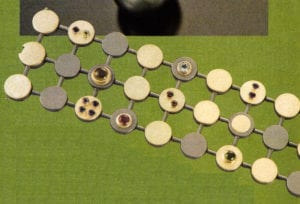 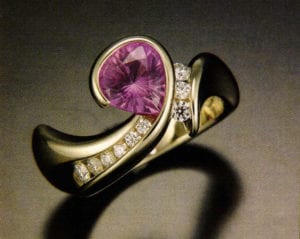 A ring by Thomas Dailing featuring a pear-shaped pink sapphire accented with round diamonds; photo by AZAD.