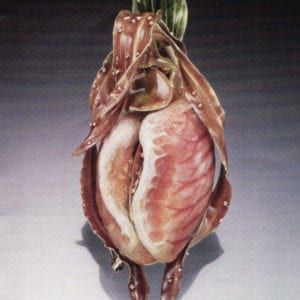 66 Enamels in a California Show

The Northern California Enameling Guild (“NCEG”) and the ACCI Gallery recently sponsored an excellent show of works from around the world. Located in Berkeley, California, the ACCI is a cooperative of good reputation and a long history of presenting excellent art. The Seventh Juried Enamel Exhibition featured 66 works with some artists showing more than one work. A special selection of Georgian enamels was included. Jurors were Rachel Osajima, Charlene Modena and Joanne Tanzer. Rachel Osajima is Curator for the San Francisco Craft Museum, Charlene Modena is Head of the Metal Arts program at Academy of Art College in San Francisco and has worked in enamel while Joanne Tanzer, who has enameled for many years, started the enamel program at San Diego State. 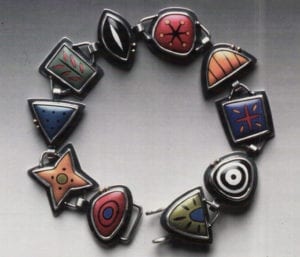 Juror Award winners were “Osaka Obi, Houston Concho,” by Jan Harrell, “Keep Reminding Me” by Karen Jablonski and “Dark Directions” by Jan Smith. All are described below. Enamelist Society awards went to Bae Chang Sook’s “Happy,” “Folded Bowl” by Renee Menard and David Freda’s “Pink Lady Slipper Brooch.” Another award, reserved for only NCEG members and voted upon by the attending members, went to “Calyx III” by Alana Clearlake. 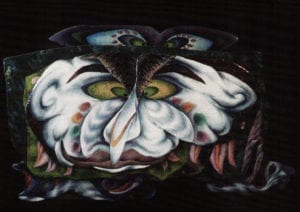 This show was more conservative than the far reaching survey show at the sizeable Richmond Art Center in 2002. However, due to the proximity of a walking public (including the large University of California), this show enjoyed greater visibility and a larger chance of exposing the general public to the breadth and depth of enameling possibilities. Examples of various techniques were presented in a large window, attracting an audience of people shopping the nearby book and craft supply stores. 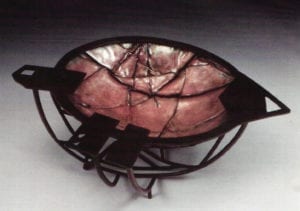 Wit and humor were in evidence with such pieces as Jill Baker’s amusing kit of sifted, false fingernails titled “Nail”. Clownish humor could describe “Masquerade”, a gleeful mask and hidden person. This large, cut metal, saturated colors, large scale wall work by Herbert Friedson surprised viewers with it’s attitude. Sifting, wet pack and foils were used. A quieter, second work of his was also shown. The Flying Flux group Roberta Smith, Vivian Stillwell, Pat Aiken and Jane Beiser – presented four self portraits mounted together as one entry. “Sanctum: Inner Promises” consists of four panels using various methods such as metal cutouts, repoussé and screen printing. One artist playfully encouraged the reception audience to match the members of the group with the portraits during the well attended reception. 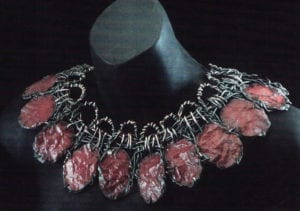 Continuations of particular artists’ explorations into highly individual styles include Mary Chuduk’s piece, “India Garment Brush”. A large hank of what might be human hair descends from a fancifully enameled and shaped ferrule that is topped by a finial. The work appears symbolic and mysterious. 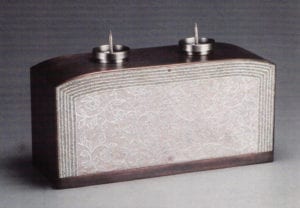 Anne Clark’s flat figurines with titles such as “Pajamas III”, David C. Freda’s miniature, sculpted metal” Pink Lady Slipper Brooch” and “Study of a Newborn Snake with Leaves” were eye catching in their explorations of artistic thoughts. “Newborn” is a tiny snake hatching out of it’s egg, which is next to two wet leaves of brown and green. This unusual topic is exquisitely explored in enameling and as metal work. Commercially successful jeweler Kimberly Keyworth’s rich “enamel pebbles” start out with 4 layers of black enamel base topped by opaque colors. Her bracelet of 10 medallions is highly finished. Instead of using wire to separate the colors, she uses diamond burs to cut into the surface, then fills the voids and refires again with a torch using her custom mixed enamels (see “Ornament” magazine, Vol. 27, April 2004 for further information). 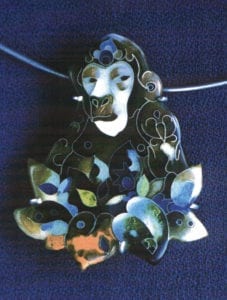 Vessels were in evidence. The most striking example was Jaimé Frechette’s “Splatter”. Set in a tall vitrine under a skylight, this cast, braised and enameled copper work responded in an ever-changing, resplendent fashion to each variation of natural light as the day progressed. Judy Stone’s creamy “Topographic Dish”, with wet pack, foil, cut work and and cut work was as appealing as always in it’s skillful enamel coloration of an aerial view. Renee Menard’s folded metal “Bowl” relied more on metal work’s texture’s enhancement by a flux, with the surrounding metal frame of powerful design. Deborah Lozier, whose work often mixes enamels with metal work in a more European flavor, continues her theme with “Wall Brooch Oohs ” and “Pod for Daylight”. These works seem simple only upon first view. The contemporary, small, red enameled pod, “Transition”, by Kaitlin Cron, is made of a triangularly shaped, red metal pod with an enameled, cut cylinder neck inserted to indicate a bursting outward, is torch fired to perfection. Alana Clearlake’s airy “Calyx III”, an earlier example of her experimentation in mesh to form sculptural forms, looked ready to fly away on it’s own. (See recent Alba article in GOM for technical details.) 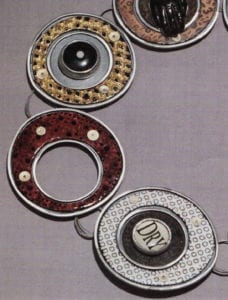 Boxes and other containers had quite a turnout. Bae Chang Sook’s “Happy” and “For You” works are of particular interest. Although classic shapes, these works have a modern feel and are of subtle shades of sifted grays and tans. “Happy” is a candelabra yet stands on it’s own sculpturally without it’s function being obvious. Erin Gray submitted two sets of gourd pods “Denier” and “Believers” with enameled lids that were delicate and reminiscent of tiny pinch pots in their size. Despite their wide silver rims, the lids were so well designed as to appear an integral part of the gourds. 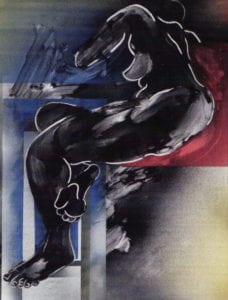 References to ancient enamel usages include Judy Foreman’s reliquary “Chasse I” of rather rudimentary coloration while her other work, “Cloudmobile” was of a more contemporary feel and included horn embellishments. 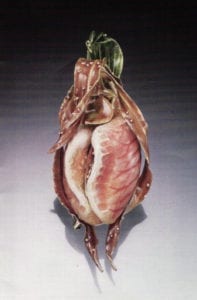 Actual “clothing” was brought to mind by Ia Gigoshvili’s “Tie”, which consists of a mesh cloth of silver with a hodgepodge of varied shapes of beautiful cloisonné “pins” attached to the surface of the mesh.

There were numerous method variations in the jewelry arena. Award winning “Dark Directions” by Jan Smith is a wonderful set of three medallions that descend from each other. They are dark enamel with sgraffito lines using liquid and sifted enamel. Metal prongs and rims were used for the settings settings. Nancy Bonnema’s intriguing necklace, “French Knots”, a reversible work, uses flattened thick wire to surround a pendant of sifted gray “stone”, reminding one of an electron’s circling pathways. Romualdo Medina’s work, an elegant wire and metal leaf necklace named “Red Wesekh” is particularly handsome. Equally as appealing is Katy Bergman Cassell’s “Olive”, a basse-taille ‘wreath’ necklace suited for the Olympic winners. Lynn Christiansen’s necklace of chain mail with dapped silver disks enameled in subtle colors would likely be better admired on a moving person with the disks glimmering. The Georgian contingent offered fine examples of cloisonné as jewelry, among other items. Nana Gigoshvili’s “Moon” is a work with a sickle of metal below a medallion showing a woman with mottled variations of wet packed blues for her dress. Another work by this artist is a jeweled pin integrating the wire of enameled cloisons with a surrounding filigree of silver wires in a subtle and successful manner “Monkey,” by Georgian David Bakuradze, captures one’s interest as much by shading and outside shape as the concept of a monkey hanging off the wire necklace. 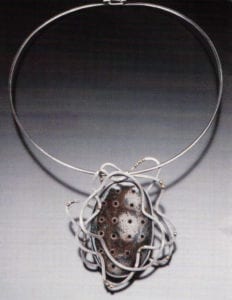 Wall work, such as Rita Deanin Abbey’s “Impressions”, Noboru Matsouka’s “Bird Tinted Red Color,” and the striking “Escape from the Labyrinth” and “Escape from the Shackles” by Jan Harrell were as varied as can be. Abbey’s work translates and expands the academic figure gestural drawing of a nude into porcelain enamels. There is evidence of sgraffito, masking, spraying, over spraying, layering, rubbing off and smearing the colors in this seemingly unassuming work. 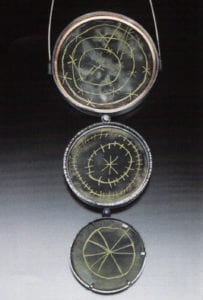 Matsouka’s cut out and mounted birds, amusingly enough, appear to be perched on a tree of black ridged plastic and light plastic sky. The play of glossy, highly finished enamel with ridged plastic work very well together. Less light hearted, two of Harrell’s works use gilded grids mounted high above the background causing shadow effects as well as the impression of imprisonment. Her third work, the catchily titled belt of medallions, “Osaka Obi/Houston Concho” is quite stylish. Karen Jablonski’s award winning “Keep Reminding Me” (see cover, this issue) appears to be more of a work in colored pencil than that of enamel yet is actually stencil work and limoges, continuing the push to expand enamel’s virtuosity that we have seen in John Killmaster’s explorations. Hilde Haller’s three works explored the use of gold leaf in apparently simple presentations that bore a closer examination. Her small wall work “Desiertos Rojos (Red Desert) ” could be reworked in any proportion and still be of interest.

In sum, the Seventh Juried International Exhibition was filled with many styles of work, was well attended and worthy of attention. We look forward to more exciting exhibitions that further the interest and growth of the wonderful and ancient field of enameling.

All articles by this author
Previous Book Review Camille Faure
Next Ellen Kochansky: Along the Way
Social media