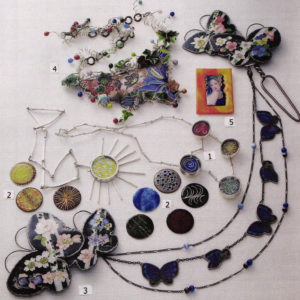 Although the entry period was the busy Christmas season, The 21st International Cloisonne Jewelry Contest received about 100 entries from 13 nations, such as from the United States, South America, Europe and Asia, and about 100 works from Japan.

The much-appreciated worldwide response enabled us to hold the contest on a grand scale.

The juried exhibit ‘*’as held at The Ueno Royal Museum in Tokyo from March 4 to March 10, 2008, displaying award-winning and selected works of the international context. Many aficionados of enamel jewelry visited the exhibition to enjoy the variety and quality presented. 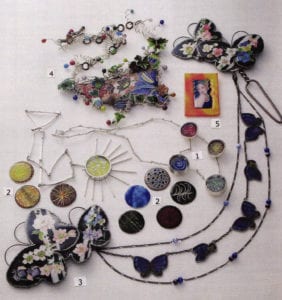 “E-MOTION,” the Grand Prix Award winner, is an exciting, very romantic work. When worn, the small grains of silver in the main part will move and shake, so that the owner can fully enjoy the pleasure of wearing a work that very much expresses humor and sensitivity.

“Playing with Flowers,” the Award for Excellence winner, a serious, interesting creation, is expressing Japanese tradition from a new viewpoint. Upon wearing it, to attend a party, a dream is given.

Similarly, “Nature’s Ways,” the other Award for Excellence winner, is a very exciting work where nine inserts can be exchanged in the silver holder to create nine different effects. The idea that nine varied tastes can be enjoyed is a very good idea.

“My Garden,” The Mainichi Newspaper Award winner was created by the artist to allow the owner to wear a simple dress and create a stunning impact with “My Garden” as the focal point.

Space does not allow me to introduce all award-winning works here so here are the top 5.

Please visit us at our website to view these beautiful International and Japanese creations: http://homepage3.nifty.com/enamel-yohko/.