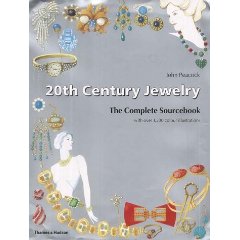 by Nina Graci
Ganoksin may receive customer referral fees from the companies listed in this page. Learn more.

John Peacock is a fashion designer’s best friend. Over the years, this former BBC costume designer has published a dozen easy-to-use source-books covering 40 centuries of fashion, making them the most comprehensive record of fashion and accessories ever published. Peacock has finally compiled a source-book for jewelers as well as designers, “20th Century Jewelry, The Complete Sourcebook”, and filled its over-sized pages with color drawings of representative pieces of jewelry from 1900 to 2000.

The presentation is unique and somewhat startling because, instead of glossy photographs of luscious jewelry, each page contains 20 different color drawings, grouped by item and dated. It took years of research using photographs, paintings, and the jewelry itself to produce these 1,500 highly detailed drawings.

Peacock’s aim was to illustrate the types and styles of precious jewelry, costume jewelry and novelty jewelry worn by fashionable women and men of their time, concentrating on what he considered most interesting and useful to the designer. He attacks the daunting task of charting jewelry’s 100-year development by dividing the book into five parts at 16 pages each. Each section covers a 20-year duration and each decade is allotted seven pages, grouped under the headings Brooches, Earrings, Necklaces, Bracelets, Rings, Buckles and Clasps and Hair Ornaments. It is interesting to note that necklaces remain constant, peaking in the 1950s, while hair ornaments, for example – an essential accessory for the lady of the 1900s – dwindled into obscurity by the 1930s and were revived again in the 1950s. Similarly, novelty jewelry was relatively rare in the early years of the century, but became more dominant among the cocktail jewelry of the 1940s. And in the latter decades of the century, such a wide variety of earrings was worn that Peacock had to allocate extra space to them.

Miscellaneous Jewelry and Jeweled Pieces follows the main titles with two decades’ worth of obscure and fascinating items. Sautoirs (long necklaces), bandeaux (hair bands), hair slides, and enamel corsages as well as barrettes, hatpins, tie-pins and tie-tacks, scarf rings, shoe jewelry, dress ornaments, and bead embroidered evening bags sparkle once again. Eight pages of schematic drawings and descriptions of each piece of jewelry, including details of materials, stones, designs, fastenings, mounts, and surrounds, follow each section. Men’s jewelry, because there is less of it and its changes have been less radical, is confined to a single page at the end of each 20-year period. Eight pages of schematic drawings and detailed descriptions of each piece of jewelry follow each section.

Peacock defines jewelry as “any decorative article worn as personal adornment, made from any material.” Whether hung, pinned, or clipped onto the body or sewn onto clothing as a beaded motif, it is probably within these pages. Jeweled and beaded garments, as well ornamental watch cases, pendant and lapel watches, and wristwatches are also illustrated.

Every style is represented beginning with the elegant Belle Époque, whose jewelry featured fine pierced trelliswork, loops, swags, and garlands of stylized flowers with diamonds and pearls set in platinum. Art Nouveau designers were inspired by nature, constructing their jewelry from ivory, tortoiseshell, and horn – materials chosen for their aesthetic rather than intrinsic value. After the first World War, the Art Deco style came into fashion. It owed nothing to tradition and little to nature, but was closely associated with contemporary art, the machine age, and the streamlined architecture of the time. At the same time, the discovery of Tutankhamen’s tomb unleashed a revival of Egyptian-style jewelry incorporating scarab beetles and lotus flowers.

The 1930s saw the evolution of feminine jewelry, with figurative, foliate, and floral influences. Marcasite became fashionable and was often teamed with jade, coral, carnelian, and chrysoprase. During this decade, and continuing into the 1940s, novelty jewelry was much in demand, made either from precious components or from materials such as plastic, stamped, or pressed base metal or wood. These pieces often took the form of animals and birds, stylized flowers and fruit, or fruit-laden Carmen Miranda heads and dancing figures. At the end of the 1930s, cocktail jewelry took center stage and it became even more prevalent in the 1940s. This was robust, assertive jewelry, with ribbonlike loops, voluptuous curves, and fan shapes in bright yellow gold set with cascades of real or fake rubies, sapphires, aquamarines, and amethysts.

Towards the end of the 1940s and throughout the 1950s, witty figurative motifs and cartoon-style animals were the vogue, along with fruit, flowers, and vegetables (particularly mushrooms), scarecrows and ballet dancers. During the latter part of the 1950s a trend towards relaxed “modern” jewelry prevailed – asymmetrical slabs of gold offset with brightly colored cabochon stones, or stones in their polished but uncut form. In this period more self-consciously “modern” jewelry also began to be produced and continued in popularity into the 1960s when natural, organic shapes and molten-looking metal were set with uncut crystals or stones such as tiger’s-eye, lapis lazuli, or onyx.

Outsized Maltese-style crosses set with multicolored stones made their appearance in the 1980s, hand in hand with a revival of out-and-out glamour known as Retro Chic. Glittery and showy, this jewelry broke all the rules of previous decades, which stated that “a lady should never wear diamonds in daylight.” By the mid-1990s, subtly classical retrospective styles were back. By 1999, there was a rich and varied range of real, imitation, fake, fashion, and costume jewelry in both period and modern styles.

The book’s reference section includes a Concise Biographies of Designers and Companies and a Chart of the Development of 20th Century Jewelry. This outlines at a glance the changes in jewelry brought about by the jewelry designers and companies who nudged jewelry design forward with their bold visions, daring shapes and fresh materials.