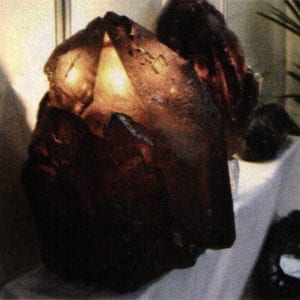 10th Brazil Gem Show: Back to the Source

The 10th Brazil Gem Show was, in many respects, a show reborn. Held March 15-18 in Governador Valadares, Brazil, the show was in a new city with a new exhibitor mix designed to bring buyers closer to the source. 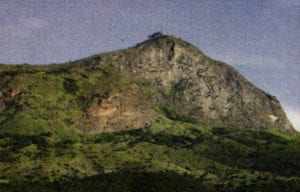 Given that Brazil is one of the world’s top gem sources – and one of the gem industry’s most pleasant buying locations – it may seem odd that buyers need encouragement. Yet over the past decade or so, Brazil’s focus has shifted to the point where the country now exports more jewelry by value than gemstones. In fact, at the 9th Brazil Gem Show in 2005, held in the much larger and more accessible city of Belo Horizonte, the majority of exhibitors were jewelry manufacturers rather than loose gemstone dealers. 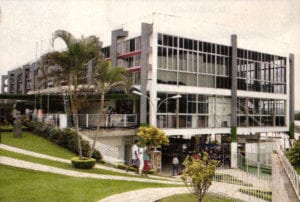 The venue of the 2006 Brazil Gem Show; photo courtesy Ajomig.

The decision to bring the show to Governador Valadares, in the heart of Brazil’s mining region, was a conscious change of focus to loose gemstones. In addition to some internationally-known Brazilian gem companies, there were a large number of local dealers who would otherwise never leave their mines and businesses to take part in a trade fair. In that respect, the show accomplished exactly what its sponsors set out to do: promote the local trade. 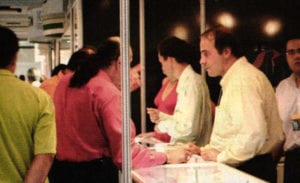 Exhibitors were satisfied with show traffic this year; photo by Morgan Beard.

Life has gotten a lot harder for smaller gem companies in Brazil, due in large part to a drastic slowdown in mining. One source estimated that more than 50 percent of the mines in the region have closed, and even the ones that are still open are facing serious challenges.

Part of the problem is the geology of gemstone deposits — once the material that’s close to the surface is exhausted, it takes money to dig deeper, and the gems become more difficult to find. “Mining is so complicated; there’s so much risk,” comments Henrique Fernandes of Pink Stone. He works a mine founded by his grandfather and supplements his inventory by buying gems from other places. “Sometimes [it costs] a lot of money, and you can go for two years with nothing coming out. Mining like this is a gamble.”

Seleme Hilel Filho of Minerals & Gems agrees. “Production is not so good at the moment. [In order to] mine we’re spending a lot of money – our expenses are almost double — and the price of the dollar is not helping. We pay more, but we cannot sell [our gems] for more.”

Adding to miners’ woes is the Brazilian Institute of the Environment and Renewable Natural Resources (IBAMA), which in the past few years has come down hard on local, small-scale mining operations.

“The miners are peeved because the environmental agency is very vigorous in this region applying the law while the Amazon is burning,” explains David Stanley Epstein of Precious Resources, a broker in the neighboring town of Teofilo Otoni. He describes the situation of one miner in the Amazon who is required to have a tiny rivulet on his mine property — four inches deep at maximum — inspected biannually by IBAMA. The cost for the inspection is 800 reais (US$378), more than triple the country’s annual minimum wage. 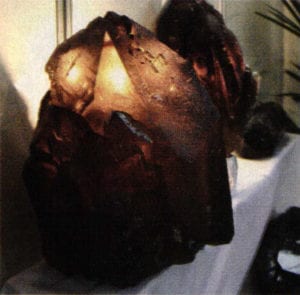 Large crystals like this quartz crystal are popular Brazilian items that were featured at the show. Photo by Morgan Beard.

“We are having difficulties here with the environment and the small miners, [because IBAMA treats] them the same as a huge company,” says Clement Sabbagh of Sabbagh Bros., a gemstone wholesaler and regional delegate to the Jewelry Industry Union of Minas Gerais (Sindijóias), the organizers of the Brazil Gem Show. “The small guy, he doesn’t have the means to hire a geologist and an engineer.

“[The small-scale miners] need to adjust themselves to the environmental law,” Sabbagh continues. Sindijóias is working with the government to ease the regulations and help miners navigate through the rules. “It takes knowledge, and we are giving them the knowledge.”

In the meantime, Brazilian wholesalers are supplementing their gem stocks by buying from other countries, particularly in Africa and the Middle East. A similar dynamic led to Thailand’s becoming the world’s leading trade center for colored gemstones: As Thailand’s own ruby and sapphire production dwindled, Thai dealers began to buy gems from other sources, gradually building the industry into one of the country’s top earners.

But that’s a hard sell for the Brazilian government, which restricts gem imports from other countries. Under current regulations, any rough or cut gemstones imported into Brazil have to be reexported in six months, or face heavy tax penalties.

“The government thinks, ‘Why don’t you use Brazilian materials?’ ” says Marcelo Bernardes of Manoel Bernardes, a gem wholesaler and jewelry manufacturer. “We’re trying to show the government that now it’s a globalized world. For example, right now, we’re not producing kunzite, very little. So we buy from Afghanistan. But maybe in a couple of years we’ll find kunzite here, so why would we go to Afghanistan?

“Brazilians are paying a better price [for many gems] than anybody else, because we understand the material,” Bernardes continues. “If Africans could bring stones into Brazil like into the U.S. or into Thailand, there would be no stones left for the rest of the world.” 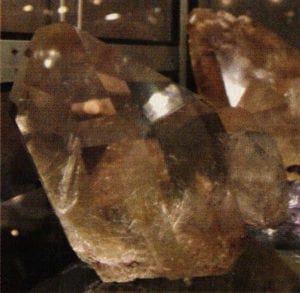 Large crystals like this rutilated quartz are popular Brazilian items that were featured at the show. Photo by Morgan Beard.

“[I would like to see the government] open imports so African guys and Pakistani guys can bring their goods over here, like in ldar-Oberstein,” agrees Sabbagh. “Product. We need product. We need stones in order to work.”

Hécliton Santini Henriques is president of the Brazilian Institute of Gems and Precious Metals (IBGM), the government agency that sponsors Brazil’s largest gem and jewelry shows, as well as Brazilian pavilions in international trade fairs. He says that the government is aware of the problem and has plans to lower the import tax on rough gems.

“The problem is that Brazil is part of the Mercosul [free trade agreement], and we have to have new discussions between us,” he explains. Under the current arrangement, they can only lower the import tax in special free trade zones. “We are working on this, to lower the import tax, to facilitate and try to have free zones, where you could import without tax and [which would have] its own facilities.” Currently, IBGM is talking about establishing such a free trade zone at the airport in Belo Horizonte, where much of the jewelry manufacturing in Brazil takes place.

The 10th Brazil Gem Show was a modest affair by international standards — approximately 150 booths and 3,500 visitors — but it had a strong international attendance and garnered positive reviews from exhibitors and visitors alike. The show will stay in Governador Valadares next year, with plans for a 30 percent expansion.

For Sabbagh, who lives just outside of the city, it’s part of a strategy to help his hometown that includes building cutting schools and helping local gem dealers — which is good for everyone. “I would say about 10 percent of the population [of Governador Valadares] get the benefit,” he says. “We teach people how to make money so we can all make money.”