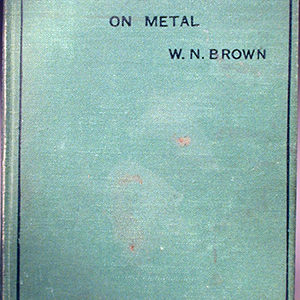 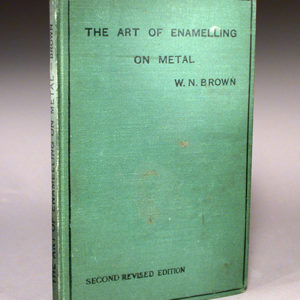 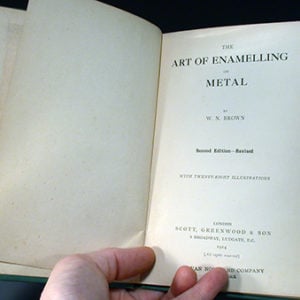 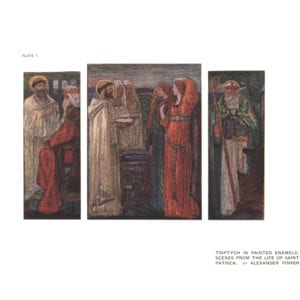 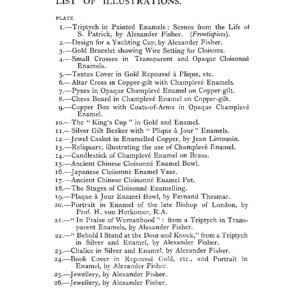 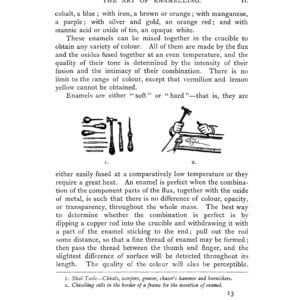 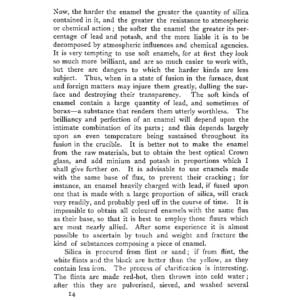 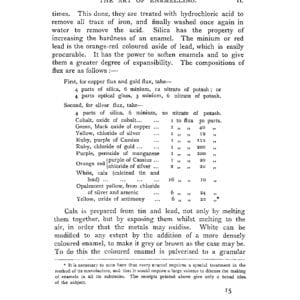 This 1914 book is a very important early book on enameling. It is 65 pages of good, solid information. The first edition was in 1900, this version was published in 1914. It has excellent, thorough detail on enameling and making enamels, interesting to glass workers and ceramicists as well as enamellers.

The introduction is extremely logical and clear, and pretty accurate. There are recipes for base fluxes. There is an early mention of water decomposing some enamels and fluxes. There is mention of uranium colors, which would be unthinkable today. White, yellow, green, blue, red, black, grey and brown enamel are extensively discussed in terms of what chemicals and oxides are used to make them and vary their colors.

There are many drawings and illustrations throughout the book, of historical works, tools, equipment and so on. Most are engravings, and are very good.

The history of enameling is addressed, starting before ancient Egypt. Instances of enameling on pottery and even bricks are mentioned. The author divides enameling into four main styles. Cloissonne, Champ Leve, translucent enamel (what we would today call Basse Taile) and surface painted enamel (called Limoge today).

There follow in-depth chapters on each technique, heavy on the history and historical examples. The relationship of painting on porcelain to painted enamels is described.

There is an extensive section on making your own enamel furnace using ‘fire-clay’ or ‘Blue Pot’, the latter a mixture of standard clay with graphite (called black lead back then). They were fired using coke or charcoal and a ‘muffle’ (a separate flat bottomed kiln insert in which the enameled work was placed into the fire). Trivets to support the enameled work while firing were made of ceramic, in the form of round pucks called ‘cheeses’ and thin plates.

Pickling and cleaning the metal to be enameled in described, using a badger hair brush to scrub it with. Planishing the metal is briefly touched on. An extensive chapter on making enamels and fluxes follows with much detail and many recipes. Grinding and washing enamels is dealt with.

Making a mucilage of quince pips is described for what today we would use Klyrfire or gum tragacanth. The whole firing sequence is thoroughly described, and the importance of gently heating the enamel at the start of firing is emphasized.

A method of copying and enlarging pictures using a grid called ‘squaring off’ is shown to allow less artistic people to copy images for enameling. Cloissone work is discussed for its similarity to the design and technical issues found in stained glass work. He uses a litho crayon to sketch out designs for painting as it sticks to the enamel better than a graphite pencil.

All in all a pretty good introduction to enameling, especially if you are interested in what chemicals and oxides create and change color, melting temperature and expansion and contraction. An interesting read for enamellers who will be bound to pick up a tip or two, and who will probably appreciate the pre-prepared enamels and equipment that suppliers have today. 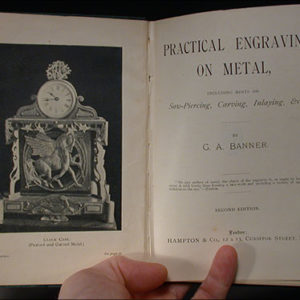 The 1899, 117 page book is intended for the amateur, the learner. As with many books of this time it begins with a history, placing engraving in a context, and the Old Testament, proving the ancient origins of the technique and its uses. Egypt… 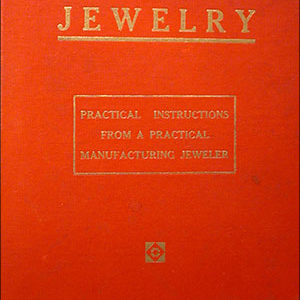 This 1914 book is composed of articles drawn from the Magazine “The Manufacturing Jeweler”. At 240 pages of eclectic, informative articles it is a treasury of jewelers secrets… 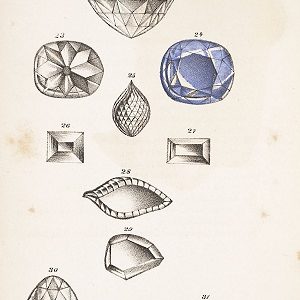 A popular treatise on gems by Lewis Feuchtwanger, 1867

A popular treatise on gems : in reference to their scientific value : a guide for the teacher of natural sciences, the jeweller, and amateur : together with a description of the elements of mineralogy, and all ornamental and architectural materials,… 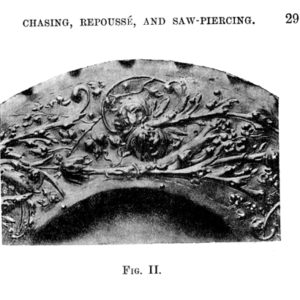 Published in 1894. This heavily illustrated book, many photographs and line drawings which cover chasing and repousse in depth and with subtlety. The hundreds of excellent line drawings of tools, stamps, and more are excellent. The tool…

This rare book first published in 1905 gives a good explanation and introduction to electroplating, with extensive chapters on polishing and finishing work for plating. There are numerous recipes throughout the text and the writer’s ‘Voice’…