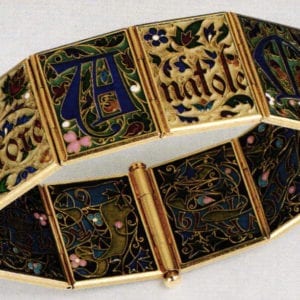 What remains of the culture of a people? How can we formulate an image of the lives and thoughts of other people? The written word was probably man’s most important achievement on the road to civilization. 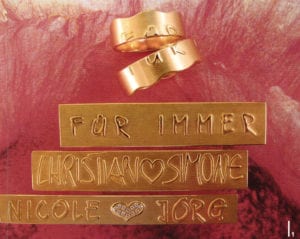 Wedding rings from the ‘Unendlich’ collection by Claudia Schuller. A text is written, taken apart and spread across two rings. Each partner wears one half of the mutual message of love, readable only when brought together as a whole. The sense is created by the mutuality… 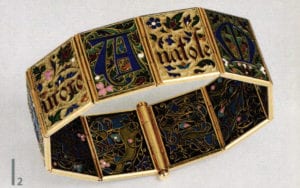 Bracelet, Lucien Falize, gold, enamel, Paris, around 1880. In the style of medieval book painting, this bracelet probably shows the name and date of birth of the client’s children. Like the renaissance and other epochs of art history, medieval art was among the sources of inspiration for the brothers Alexis and Lucien Falize

Invented by the Sumerians in around 4,000 BC, the written word is now the most important means of communication in creating lasting messages. Clay or stone tablets were initially used as a means of writing, followed by paper and now electronic data carriers. In Antiquity, jewelry was used as a means of conveying a verbal message. In Greece, an engagement ring was found dating from the 4th century BC engraved with the word ‘darling’. The Romans inscribed their jewelry with Latin sayings. Numerous pieces of jewelry from the Viking era were also decorated with runes.

During the Renaissance, short poems and inscriptions were engraved onto wedding rings, often inside the band of the ring. These secret words of love were often decorated with roses or rays of sunshine in colorful enamel. Anne of Cleves, who married King Henry VIII of England in the 16th century wore a wedding ring bearing the following optimistic inscription: ‘God send me well to kepe’. It was also popular to inscribe the band of the ring with words from the church marriage ritual: ‘What God has United, Man should not Separate’. Martin Luther had this sentence engraved on the gimmel ring he used to marry Katharina von Bora in 1525.

The fastener of the Art Deco style diamond bracelet worn by the Duchess of Windsor on her marriage to King Edward VII of England in 1937 bore the profane inscription: ‘For our Contract 18-v-37’.

Today, the written word continues to feature on the inside of wedding rings as a romantic confirmation of eternal love. Expressions of love may also, however, be engraved on the outside of the ring. In today’s media-based society, people wish to inform themselves, including thereby forgoing the notion of romantic mystery. The text message is  supposed to make a statement, to conquer public terrain. Even jewelry artists are using  the written word to strengthen their message . Design and text are combined to form a single statement.