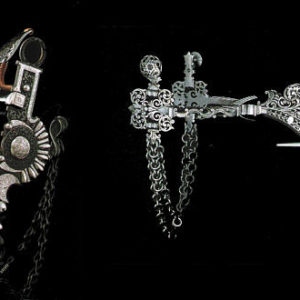 The post – Civil War West – the era of Longhorn cattle and mustang cowponies, the open range, the long drives – gave the world an unforgettable folk hero, the cowboy. His basic needs were few and he used whatever was available during the early period of the tong drives bits and spurs, rope, hats and cavalry boots, remnants of Confederate uniforms, homespun shirts, and Mexican saddles.

In the next few decades, as local artisans and distant factories labored to meet the fast-growing demand, cowboy dress and gear became more standardized.

Bits and spurs, like boots and saddles, were mainly handmade in ranching centers. Cowboys were especially particular about their gear and took pride in buying the best equipment they could afford Blacksmiths generally started making bits and spurs as a favor to local cowboys. Those who were the most skillful were usually swamped with orders, and what started as a sideline became their mainstay. Spur and bit makers were individualistic craftsmen, developing their own stylistic trademarks. The makers were locally or regionally famous during their active careers, but today many are only remembered by collectors, who admire their skill but know little of their lives.

The Traditional Cowboy Arts Association (TCAA) was formed in 1998 with the goal of celebrating and perpetuating the work of such artisans, who have dedicated themselves to achieving excellence in the cowboy crafts The TCAA promotes the traditions of the North American cowboy through an association of the finest gearmakers in the disciplines of silversmithing, saddlemaking, rawhide braiding, and the making of bits and spurs.

For the past five years the association has presented an exhibition and sale of members’ works at the National Cowboy & Western Heritage Museum in Oklahoma City . The 2003 exhibition consisted of exquisite silver work, the finest saddles, bits, spurs, and braided rawhide gear by 14 craftspeople. Each work demonstrated the masterful skill of the craftsman and his creative freedom to manipulate techniques within the confines of tradition. With function as the underlying foundation, heirloom quality pieces have become valued possessions of serious horsemen as well as collectors.

Viewing these objects with no working knowledge of their function, I was nonetheless seduced by the intriguing forms and passionate swirls of western-style surface ornamentation. The mastery of techniques in each work was awe-inspiring and created with obvious respect for the traditions of the past, while introducing new ideas to the historical forms. The overlay of firearms engraving and traditional inlay techniques with exquisite detail applied to the bits and spurs made by Ernie Marsh represents a fine example of the cross-pollination that has occurred within the cowboy heritage.

Silversmith Scott Hardy from Longview , Alberta , Canada provides insight into the maker and his craft: “Embellishing horse and rider with precious metals is a tradition as old as man on horseback … crossing tribal and cultural boundaries, silver and gold trappings have expressed the pride of horsemen throughout the millennia. The image of the cowboy still stirs our ideals of independence, integrity and freedom, while appreciation of things well-made, by hand, flourishes in the age of mass production and mediocrity.”

All quotes from the 2003 Traditional Cowboy Arts Association Exhibition catalogue.

By Chris Ramsay [Metalsmith Magazine – Spring 2004]
Chris Ramsay is a metalsmith and professor of metals and jewelry at Oklahoma State University, Stillwater

Thought-provoking columns contributed by leading observers in the field on subjects such as fashion, education, and the status of craft.
In association with SNAG’s