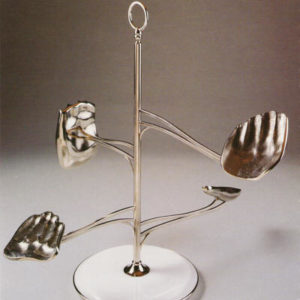 The Work of Jennifer Crupi

Cool, glistening, and vaguely human, Jennifer Crupi’s sculpture and jewelry arouse curiosity even as they evoke fear. While the power of body language in art is typically linked with dance, theater, and especially mime, the interplay between thought and gesture takes center stage in Crupi’s work. At rest, her devices appear innocuous and unassuming. Once viewers engage their bodies, her devices become an edgy means to probe behavior, with its underlying psychological states and motives.

Works from her Guarded Gestures series, for example, hang on frosted mirrors that are traced with the outline of a person bearing the same posture. When viewers align themselves with the reflections or wear the pendants, however, they realize the shielding nature of the stances and confront their own body language.

Just as her objects mask their real function, they reveal the often hidden meaning behind posture and speech. Their bracelike components freeze moving arms and other body parts, suggesting not only medical prosthetics and surgical instruments but also protection and constriction. In this dialogue between stimulus and response, Coup seeks to penetrate the old proverb “Actions speak louder than words.” It could equally be said that her psychologically charged works warn against becoming “prisoners of one’s actions.â

By Sarah Tanguy [Metalsmith Magazine – Winter 2002]
Sarah Tanguy is an independent curator and critic based in Washington, D. C.
In association with SNAG‘s