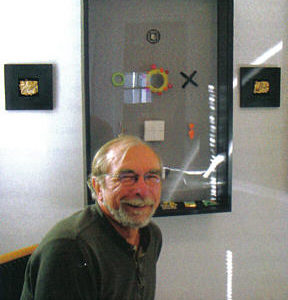 Upon reaching the porch of Daniel Jocz’s Cambridge studio and home, I recalled having been there briefly for a party during one of Mass Art’s successful symposiums more than seven years earlier. Jocz and I met again at Haystack’s New Works workshop last September.

For five days the school becomes for former faculty what it is to students, a place to explore and experiment, or simply work without the everyday interruptions of business or teaching. Jocz was exiled from the metals shop because he brought a new series of aluminum bracelets to be worked on. Aluminum is a contaminant to silver/goldsmithing studios and it was my job, as the studio tech, to boot him out. 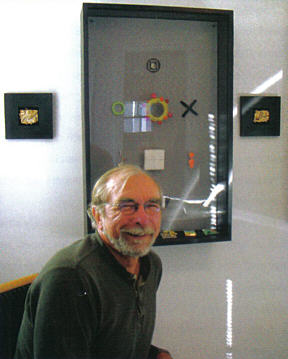 While enjoying a cappuccino Jocz made with his prized Rancilio espresso machine, I observed numerous Alessi objects around his kitchen. Jocz then began the studio tour with a visit to the basement where some of his work takes place. There we found relics of plaster sculpture left in a pile. Jocz commented that some days he feels the need to work on that scale again just to remember a sculptural sensibility. His career as an artist began as a sculptor, and that past remains evident in his methods of working. One small area of the basement holds an array of power tools: grinders, belt sanders, a band saw, one old and one new jigsaw. Both the grinder and jigsaw have been used recently for the aluminum series he is currently working on.

We next headed upstairs to a small, light-filled room on the second floor. At a mere 144 square feet it is laid out into various work stations. I am struck with the thought that some of the most inventive and prolific studio jewelers have incredibly modest studios and equipment. Jocz mentioned that because he came to jewelry through a side door, he still only acquires tools when he needs them for a specific project.

When I first saw Jocz’s work in 1992 I was intrigued with his “Protos” series of rings with polymer and pigment. As a newcomer to metalsmithing, wearability did not interest me, but I was drawn to the unwearability of these rings, and to their curious organic shapes. Jocz’s bold and unusual applications of color on silver have continued to engage me. Of all Jocz’s work the flocked “Candy Wear” series is perhaps the most pedestrian in its use of a mundane industrial application to produce fun, easily understood shapes. What is definitely not pedestrian is all that goes into the design process. 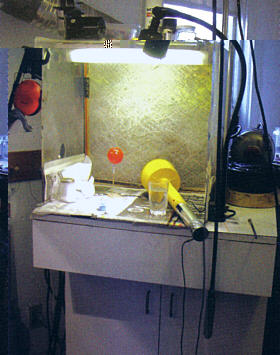 Dan Jocz has earned a certain “ownership” of flocking by research and experimentation. The flocking itself is relatively easy — it is everything else that goes into creating a piece of functional flocked jewelry that is challenging. Jocz demonstrated on a flocked tiara that needed extensive repairs. A sphere that was to be mechanically attached needed to be flocked.

It happened so quickly I barely saw it occur. Essentially the rayon flecks (lightly spritzed with salt water to help them get charged) are put into a “flocking gun,” and an electronic wire is clipped to send the charge to the stand (covered in conductive paint) that the sphere rests on. The gun is turned on, aimed, and swiveled as the rayon flies through the air to attach itself in an upright position to the sphere. Within seconds Jocz had transformed the piece.