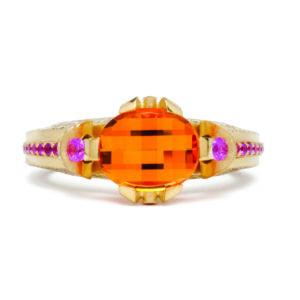 He just couldn’t help himself. When Ryan Roberts sat down to create a piece to showcase a 3.46 spessartite garnet cut by Stephen Avery, he started with the idea of making something a bit more understated and less expensive than his usual creations.

“This ring really did start out with me making an effort to hold back,” says Ryan Roberts. But, like the best laid plans of mice and men, it quickly went away.

Because he admits to being “center-stone oriented,” Robert approached the project looking for a way to best showcase the unique garnet. “The stone has an unusual cut. It has a curved girdle and a curved surface with no table,” he says. “I wanted to create a design that moved off of the curved side section [of the stone]. I wanted the curve of the prongs to follow the curve of the stone down.”

To begin the project, Roberts turned to CAD. “As a fabricator, I don’t plan,” he admits. “With CAD, I can fiddle around, solidifying ideas without wasting any metal.”

Once he was satisfied with the design, he cast the 18k gold ring in four pieces: an interior band, an exterior band that merges with the interior band, and two rails that would be placed on the sides of the ring. He likes to cast the pieces separately because it allows him the chance to clean everything up prior to assembly, after which cleanup becomes difficult, if not impossible.

To join the interior and exterior bands, Roberts used a laser welder to tack them together. “One of the great things about the laser is that you can easily tack things, check the position of the parts, and if it’s not quite right, break them apart and try again,” he says. “It’s a lot of trial and error, but that’s what makes the laser great.”

When he was happy with the position of the two bands, Roberts soldered them together. “The bands are pretty thick and I needed a strong weld,” he explains. “It wouldn’t be cost- or time-effective to weld the entire band with a laser.” Plus, “the laser leaves little circles when it welds, whereas solder leaves a neat, clean line,” making cleanup easier.

After soldering the bands together, Roberts used an engraver to clear out a small amount of solder from the solder line. He then used the laser to weld matching 18k material over the solder joint. “Because solder is always slightly off-color, I wanted to create a flawless line on the surface of the ring,” he says. “It’s an unnecessary detail, but one I like to do anyway.” Once the welding was complete, he pavé-set the 0.92 ctw of diamonds that run along the sides of the bands. 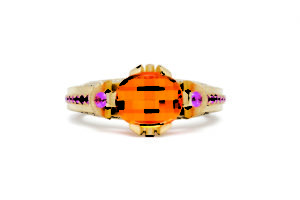 The design also called for a row of pavé-set sapphires to run along the outside of each side rail, and for those rails to run underneath the looped tops of the outer bands. That meant he had to pavé-set all those sapphires prior to attaching the rails to the ring. “For this piece, the laser welder was critical because it allowed me to do all of the stone setting before assembly,” he says. “I wouldn’t be able to set the stones once everything was in place.” While sapphires can tolerate the heat from a torch, Roberts didn’t want to risk breakage or any kind of color change.

Once the sapphires were set, he tucked the rails against the sides of the ring and under the top loops of the outer band. He then used the laser to weld the rails in place, securing them at the top and bottom to the outer band. He added four tube-settings, two on either side, connecting the sides of the inner band at the top of the ring. He used his laser to tack them in place, allowing him to situate the settings perfectly without committing to a location. Once satisfied with their positions, he soldered them in place and set them with sapphires. With the ring crafted, Roberts completed the piece by setting the garnet and two side sapphires into the tops of the bands and rails. 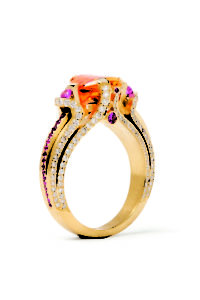 Now with an award-winning ring, Roberts admits that the design would not have been possible without a laser welder. “The laser welder has completely changed the way I think about constructing my pieces,” he says. It’s made things that were once impossible (or at the very least, extremely difficult), possible, including this ring. And while it’s not quite the less-grandiose piece Roberts originally set out to design, he does feel that he managed to show a bit of restraint. “I stopped myself from having stones going all the way around the band so it can be sized,” he says. One step at a time.