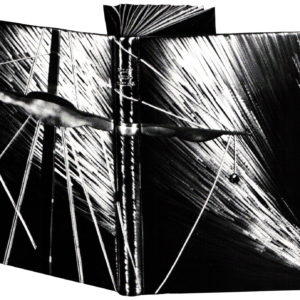 This article series from Metalsmith Magazine is named “Recent Sightings” and here Bruce Metcalf talks about art, craftmanship, design, the artists, and techniques. For this 1989 Spring issue, he talks about working with metalwork book art.

When “collectors” bookstores are visited today, dates and editions are investigated, authors’ signatures, illustrations, the quality of paper, the choice of type and the manner of binding but, the association of metalwork with book art is rarely considered, and even more rarely found.

This has not always been the case. Shrines, known as cumdachs, were fashioned of metal by the Celts to hold Gospel manuscripts, which were regarded as objects of reverence. About 1000 AD on Loch Erne, a bronze box with a silver veneer was made to house a Gospel book associated with the sixth-century holy man St. Molaise. In an entry at the end of the British Museums Gospel Book of Lindisfarne, it was noted that “. . . Billfrith, the hermit, forged the outer metalwork and set the gold and gems in it. . .”

A reunion of book art and metal appeared in 1987 at the Thomas J. Watson Library of The Metropolitan Museum of Art as “Bound to Vary” a Guild of Book Workers Exhibition of Bindings on the Married Mettle Press Limited Edition of Billy Budd, Sailor. Each of 17 guild members was given an unbound copy of Melville’s last masterpiece in an edition that was handmade, at every step of the process, by Benjamin and Deborah Alterman, owners of Married Mettle Press, Papermill, and Bindery.

The name of the press is explained as follows: According to Joseph Moxon’s Mechanick Exercises on the Whole Art Of Printing (1683-4), a journeyman could be fined for referring to type as “lead” rather than “mettle’ (as metal was spelled in those days). Founders wanted it to be understood that their type had mettle. In the early days of metalworking it was discovered that when pieces of different metals perfectly mate, they can be married with heat and pressure. The Altermans explain that their own wish is to produce book in which each component has true “mettle” and “where every element marries to create a meaningful work of craft and art.” 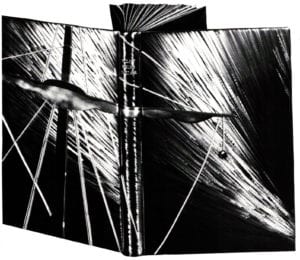 The bindings crafted by the participants for the handmade edition of Billy Budd, Sailor illustrate many aspects of “style structure, and interpretation.” Some of the bookbinders are well known, some belong to an older generation, others are at the beginnings of their careers. Although representing different national traditions in bookbinding and individual preferences, each exhibitor has presented an example of contemporary design and craftsmanship at its best.

The Altermans’ one-of-a-kind, collector’s copy of BiIIy Budd, Sailor forges a link with the medieval goldsmith who worked with gold and inlaid gemstones in order to furnish churches with reliquaries and the jeweled covers for the Gospels. The Alterman binding is described in is caption in the catalog of the exhibition as: “Sewn with a herringbone stitch onto doubled linen cords laced through wooden boards hinged to a bronze spine with etched title. Shapes of married metal (fine silver, jeweler’s bronze, and copper), twisted sterling silver wire, and a 1½ carat sapphire set in 14 kt. gold on a ground of textured gilded bronze. All of the above riveted with more than one hundred hidden silver rivets to the cross-laminated walnut boards with walnut burl interiors. Endsheets marbled by the binders. . .”

Suitable as the burl interiors of the boards are, it is almost a pity to hide the rivets, which, in their precise detailing (the silver rivets are joined to the underside of each metal piece using a special torch that produces a 6000-degree flame from the tip of a hypodermic needle) stand out like the stars that guided the course of mariners during the long nightwatches.

Spread across the front and back of the cover, a cross, formed by “a canting yard and mast with a web of taut ropes,” is lifted above the gleaming rays of the rising sun. The artists have written of their choice of a sapphire, set in gold prongs at the end of a rope of twisted silver wire in these words: “The use of a gem to represent Billy Budd was suggested by the lines: A jewelblock they’ll make of me tomorrow,/Pendant pearl from the yardarm end. . .’

Elsewhere Billy is referred to as ‘the jewel of ’em.’ A pearl, diamond, or emerald might have been more pleasing, but these would not have offered the strong, riveting effect of high contrast. The sapphire may seem black at first, as may the story itself. On closer inspection, however, it is the deepest transparent blue, like ‘welkin-eyed’ Billy’s spirit, like the deep unobstructed sky.”

The unique binding of Billy Budd, Sailor by the Altermans has not only brought about a technical union of married metals but a unity of interpretation, in the sensitive visual treatment of Melville’s tale of triumph of innocence and goodness over the darkness of evil. Benjamin Alterman says that he and Deborah “envisioned [the cover] as a ‘treasure binding’ reminiscent of a lectern Bible” embellished with gold and precious gems, those luminous ornaments that the medieval artist and metalsmiths called beautiful because they conveyed an insight into perfection of the cosmos.

The exhibition “Bound to Vary” has been traveling around the United States since 1987 and will make its last stop at the Renwich Gallery, Washington, D.C. from April 7 to August 13, 1989. A 64-page catalog with color illustrations of the various guild members’ bindings is available. Elizabeth Skidmore Sasser is a Professor of Architecture at Texas Tech University, Lubbock, TX and a contributing editor to Metalsmith.