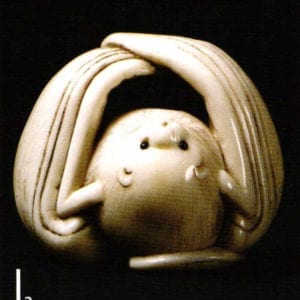 Kimonos have neither pockets nor button. Things such as wallets or small, lacquered boxes with lots of compartments (inro), containers for medicine, tobacco pouches or writing materials were therefore tied to a cord and pulled beneath the sash-like belt (obi). The netsuke was found at the end of the cord. It was intended to prevent slipping. This everyday object rose to become a work of art. Due to its compact form, which people found pleasant to touch, the netsuke was also known as a “hand teaser”. 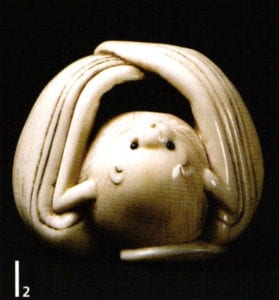 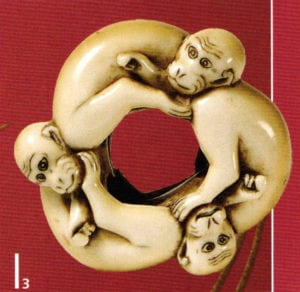 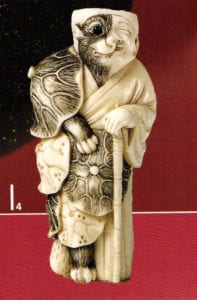 “Tanuki as a priest”, ivory, one eye inlaid in horn. Mid 19th century

The name is derived from the Japanese words ne (root) and tsuke (to attach). This is proof that the word was originally used as the basic material. Today it is no longer possible to determine precisely when the tradition arose to attach things to a belt using a netsuke. All we have are pictures and prints on which actors and samurais wore sagemonos (suspended objects) and inro with netsuke. Over the course of time, this useful object, which was originally made of wood, mussels, horns or animal teeth started to become more elaborately designed. Netsuke can be divided into different groups. A distinction is made between the following:

Tobacco became fashionable in Japan around 1570, which led to the golden age of netsuke. Their uses were extended to attaching tobacco boxes and such like. This led to a rise in demand, especially among merchants. As they were prohibited by edict from wearing swords, tobaccos pouches emerged as status symbols.

Further spread of the netsuke arose in the course of social changes in the 16th and 17th centuries and the solidification of the class society. Crafts blossomed during the long period of peace and the end of the Tokugawa era, and this applied especially to netsuke. Inro and netsuke became increasingly significant among the samurai, as increasingly more value was placed on a pompous and intricate appearance in society. Many finely worked pieces were created around 1750. Early works from the start of the 18th century are usually large and have an extraordinary design. They are also an expression of the carvers personality and also contain special, geographic features. The netsuke manufactured in Osaka mirrored the vitality of a blossoming and growing city, whereas the pieces from Kyoto reflected the dignity of an imperial city. 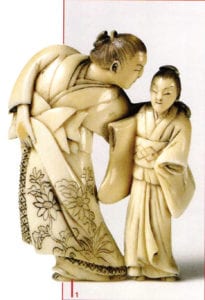 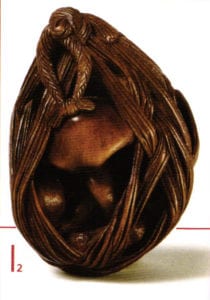 Actual netsuke schools emerged at the end of the 18th century and artists increasingly started signing their works. New methods were used in order to generate certain effects, e.g. featuring dyes and inlaid work. But the first half of the 19th century saw the emergence of certain rules in art and it lost something of its original creativity. Techniques became more crafts in order to make a distinction to the work by other artists, and netsuke became more complicated and fine and also more realistic in their depiction. The period was the second golden age of netsuke art, lasting from the early 19th century until 1868.

This has led to a situation in which many Japanese now do not even know what a netsuke is. But like the dyed wooden carvings of a Hokusai or Hiroshege, these artistic objects, which are rarely larger than one or two inches, are appreciated and collected in Europe and the United States. Prizes now vary significantly depending on quality, material and age. For example, 140,000 pounds sterling were paid for a carved netsuke horse by Tomotada.

The 12 signs of the zodiac were very popular symbols for the netsuke. Mythological and heroic scenes from everyday life were also selected. In view of the fact that netsuke were also a means of conveying the personal preferences of the owner, they are often very original and frequently also humorous. 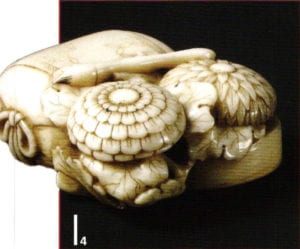 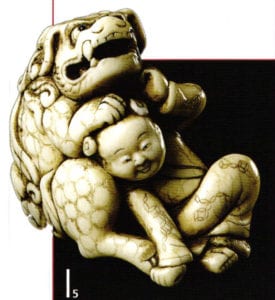 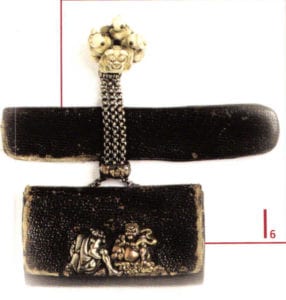 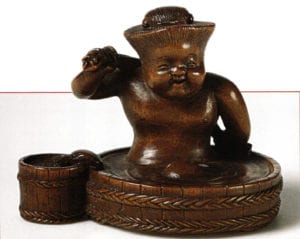 The range of materials used to fashion netsuke can be divided into six categories: wood, ivory and horn, metal, porcelain and clayware, lacquer and other materials. Boxtree wood, which is yellow and turns brown with age was particularly popular for the function as “hand teaser”; in view of its hardness, it could be designed elaborately and is not subject to rapid wear. Cypress wood was also popular due to its aroma, although it was more sensitive. Cherry wood, ebony and black plum wood were also used later on. But the range does also include many other types, including bamboo and the stones from apricots and peaches. Ebony, which the Dutch introduced to Japan as late as the 17th century was the second most frequent material. Exposed to light by being worn on the belt, it changed colors and became increasingly lighter. In addition, as they were cheaper, popular materials included walrus, sperm whale, hippopotamus, boar’s teeth, stag antlers, bull’s horn, antelope and rhinoceros. Kokusai is one of the most famous wood carvers.

Netsuke made of metal were most frequently fashioned by artists that principally made the handle protector for swords (tsuba). Iron, copper, silver and gold, some of them in alloys, were used. Another category with a strong artistic touch was manufactured by potters in porcelain and ceramics. They emerged for the first time between 1688 and 1704, and were produced by famous potters such as Dohachi, Eiraku and Mokube.

The highly developed lacquer techniques in Japan are also found in netsuke. They were generally made with matching inro. Other rare materials for netsuke include coral, mountain crystal, quartz, amber, agate, mother of pearl, malachite and tortoise shell.

All articles by this author
Previous Elisabeth Treskow: Pave Maker of Modernity
Next Porcelain: It’s in One Material
Social media