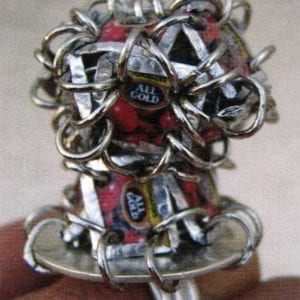 The Mysterious Power of Gold

The artistic treatment of jeweler in South Africa has long been a subject of neglect. Now, this nation with its history of colonization and apartheid is slowly making progress along its own path toward modern jeweler design. One of the driving forces of this movement is the artist Beverley Price, whose ‘Mapungubwe Re-Mined’ neck jewelry represents the way forward for new, confident South African designers.

Born in Johannesburg, the professional career of 51 year-old Beverley Price began in the mid-1970s, in a completely different field. Having qualified as a speech therapist, in the early 1980s she moved to Israel, where she began a career as a professional jeweler designer. “I wanted to work crafting material, and to have more direct control over the results of my work”, she explains. After a total of 13 years spent in Israel and Britain, including at the renowned Sir John Cass/Guildhall University, she returned to her roots in South Africa. Just how active she was in jeweler design in the subsequent years can be witnessed in her participation in numerous conferences and exhibitions in southern Africa, the USA and Europe, the founding of the Contemporary Jewelry Collective or her election to the position of first chairperson of the Art Jewellers Association. In addition, in 2004 she launched the first Jewelry Design Indaba in Cape Town, winning a SA National Arts Council Grant to the Netherlands the following year. 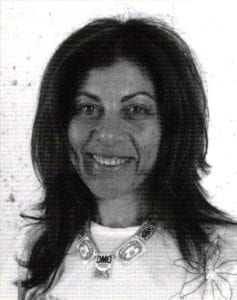 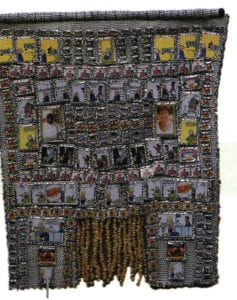 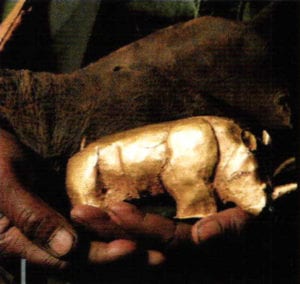 The Mapungubwe Rhinoceros, the new hallmark for South African goldsmithing 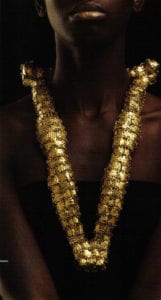 “Mapungubwe Re-Mined”, a large-format piece of jewelry with the mysterious energy of 18 karat gold

The way back to gold

Talking to Beverley it becomes apparent that her heart is in jeweler that combines South African traditions with modern design. In this, the political background of the country plays an unavoidable role in the design of the jeweler. For a long time Price did not work with gold, associating it with the fate of black workers in the era of the Apartheid regime, who mined gold under extreme conditions. “I used to work with irony – I used material that looked like gold but wasn’t or that somehow referred to it,” she recounts. She goes on: “The workers were suffering, underpaid and exploited, with no support for the development of skills.” It was against this background that Beverley Price, whose jeweler can be seen in such illustrious settings as the New York Charon Kransen Art Gallery turned her back on gold for a long time.

An archaeological experience caused her to have a change of heart, placing value upon designs incorporating the precious metal:

As early as 1932 archaeologists had found the ruins of the city of Mapungubwe in the Northern Province of South Africa, near the Limpopo river. These finds provided information about the complexity of the social structures of the peoples of that time, as well as their sophisticated craftsmanship skills, which were apparent in their goldsmith work. Since 2003 Mapungubwe has been a UNESCO World Heritage site, with the artifacts that have been found, such as porcelain, ivory copper and gold objects displayed in museums. Before the collapse of the Apartheid system this historic material was kept hidden, in order to prevent the complexity and intelligence of the peoples of the time becoming public knowledge. The excavated finds included a golden rhinoceros, which today is the trademark for South African gold jeweler. “With Mapungubwe I can ‘skip’ back to the precolonial connection to the original gold of South Africa and enjoy the radiance and mysterious power of gold in the context of Africa on African bodies; ” explains Beverley Price. 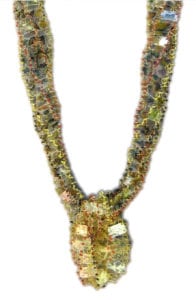 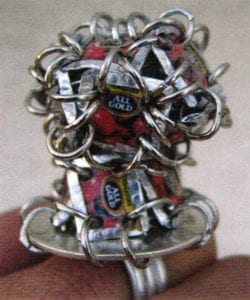 Ring “All Gold”, jewelry with humor and irony 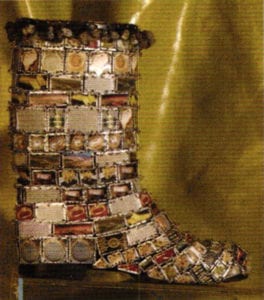 Boot to remember the workers in the gold mines 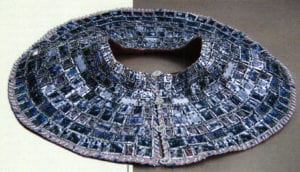 Contemporary replica of Nelson Mandela’s neckpiece which he wore at his trial, pink and blue beads being the traditional colors of the Xhosa men wear, Mandela’s tribe

Symbolic of this new approach to native gold is her large-format neck jewelry ‘Mapungubwe Re-Mined’, which combines South African goldsmith craftsmanship with modern design. Sponsored by Anglo-Gold Ashanti, the 18 karat gold jewelry weighs over 500 g. In its creation, Beverley Price oriented herself on the techniques used in the objects found at Mapungubwe. The imprinting on the gold discs includes the profile of the Mapungubwe rhinoceros. It can be worn by men as well as women and only takes its intended form when being worn, when it generates a percussive, rattling noise.

Beverly Price describes her own position amongst South African jeweler designers thus: “I am white, South African and of immigrant parents and I also lived outside South Africa. Therefore I take the position of a local designer as well as observer/outsider. I so venerate the innovativeness and experimentation with materials of hundreds of years in South Africa with the purpose of adornment in mind. Now in Europe there is so much inversion of materials – of anti-jeweler for art’s sake. It is important to tell that the indigenous southern Africans were playing with materials a very long time ago and there is much to be learned from them.”