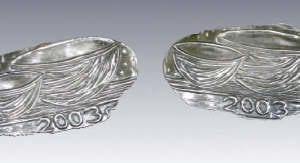 Casting is one way to move into production, but you can also take your first steps into multiples without mastering the intricacies of molten metal. PMC’s moldable qualities make it well suited for short-run production. In producing multiples in PMC, you’ll use the same techniques used to transfer textures or to produce PMC components for one-of-a-kind bracelets.

If you can create a single piece by pressing PMC into a mold, you can do it dozens of times.

Rio Rewards Senior Instructor Carl Stanley recently used this technique to produce 50 pins for a fundraiser for a local food bank. “I had the PMC on hand, and I Wanted to do something more textural,with a kind of wood block appearance to it,” he says, noting he’s done pins for the food bank before, but never in PMC.

A looming deadline for the project also pushed him towards using PMC. “One reason to use PMC was to just get the production pieces done,” he says. With PMC, he could have the pieces done in just a couple steps: casting, on the other hand, required several more operations.

PMC molding tends to be most useful for flat pieces, which can be molded quickly and easily, and is most cost effective when you only want a limited number, such as100 or fewer. In this case, Carl designed a pin that he could roll directly into a mold, fire, and finish by soldering a tack pin on the back.

Carl began by carving his design into a block of carving material used for creating your own rubber stamps. (Carl uses Speedy-Stamp pink carving blocks from Speedball, but several other brands are also available, including PZ Cut and Nasco Safety Kut. Stamp carvers also sometimes use erasers for this purpose.)

Other types of molds would also have worked, Carl notes, although care must betaken to choose a mold material sturdy enough to hold up to multiple reproductions. Molding compounds, such as Belicold, Liqui-Cast, and Mega-Sil are frequently used for PMC molding and should be sturdy enough for short-run production.

To ensure that all the pins would all be the same size, Carl then took a package of PMC and divided it into 10 balls, each weighing 3.7 grams. He sprayed the mold with jeweler’s mold release (available from jewelry suppliers for preventing injected wax models from sticking to rubber molds), and rolled each ball into the mold. He then carefully peeled the PMC off the mold, and laid it on a piece of tile for drying and firing.

On this particular pin, Carl wanted the edge to be uneven, so he left the edges to the pattern open. “I wanted them to look like shards of pottery, with a broken or torn edge,” he explains. For a more regular shape, he would have carved a deep border around the pattern. “The border acts as a sort of shear,” he explains. “When it hits that deeper border, [the PMC] cuts at that sharp edge.”

Because he had committed to supplying 50 pins, Carl opted to mold 55 PMC pieces, in case a piece cracked or tore later in the process. After firing, he finished the pieces as usual, and soldered on the posts. The final cost was $120 in materials for 50 pins, which Carl donated to the food bank. (The pins were used to recognize food bank sup-porters.)

Carl notes that this technique can also be used to create components for production pieces that will then be assembled individually by hand. “I think the best thing is to start out small and explore [production] for yourself,” he says. “Commit to making 10 of the same piece, which isn’t tough to do, or making earrings and [molding] the components. See what works, and what doesn’t.”

By Suzanne Wade – © Studio PMC – 2004
All rights reserved internationally. Copyright © Studio PMC. Users have permission to download the information and share it as long as no money is made. No commercial use of this information is allowed without permission in writing from Studio PMC.
Category:
About the author