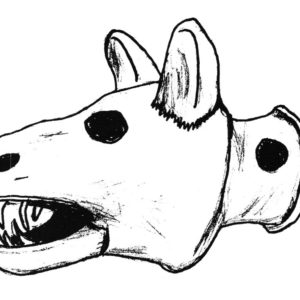 This article is a book review published in the 1995 Fall issue of the Metalsmith Magazine including “Ancient Mesopotamian Materials and Industries: the Archaeological Evidence.”

For those interested in the world’s earliest references to metalworking, Roger Moorey’s Ancient Mesopotamian Materials and Industries is a long-needed and classic work. Moorey, Keeper of Antiquities at the Ashmolean Museum of Oxford University has accomplished the difficult task of presenting comprehensive discussions of early artifactual remains, their uses and technological aspects, ranging from Iran to Turkey, from the Stone Age to the fourth century B.C.E.. The book’s chapters cover stone, bone, ivory, shell, ceramic, faience, glass, precious and base metals, brick, wood, and reed. Although the emphasis is on archaeological remains, Moorey also has included much of the relevant literary evidence from clay tablets written in cuneilorm script. 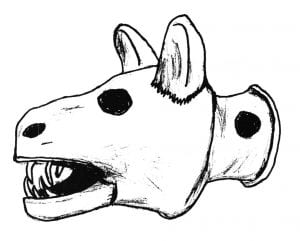 Electrum wolf’s head from a tomb of Tepe Gawra in northern Mesopotamia. 3.0 x 2.5 cm. Ears attached by copper pins; lower jaw by an electrum pin. Teeth made of electrum wire. Interior of head filled with bitumen. Circa: 3200 B.C.E.

Authors who want to set their work in some historical framework can find it difficult to obtain accurate information on jewelry making materials and processes from these ancient times. Too often, China and Greece have been given a pride of place which rightly belongs to the Sumerians or other ancient Near Eastern peoples such as the Akkadians, Egyptians, Hittites, and Canaanites. Moorey’s book, meant to be a companion volume For J. R. Harris’s 1962, classic work, Ancient Egyptian Materials and Industries, overcomes this problem by providing comprehensive and up-to-date information. In addition, Moorey’s wide-ranging interests and background allow him the control over the data which is lacking in such older works as R.J. Forbes’s Studies in Ancient Technology.

This is not exactly a coffee-tablebook – it has a limited number of photographs and drawings. For those, consult general books on Mesopotamian art and architecture or some of the over 2,000 books and articles in Moorey’s extensive bibliography. But if, for example, you want to know about the earliest lost-wax castings in copper (mid-Fourth millennium B.C.E.), the appearance of filigree and cloisonné, the varied uses of lead beginning at least as early as the sixth millennium B.C.E., the distant sources of the lapis lazuli and carnelian which the Sumerians sought so eagerly, the uses of ivory (from hippopotamus, elephant, or boar’s tusks), the long development from glazed stones to true glasses, the remnants of artisans workshops, a discussion of the so-called Hittite monopoly on early iron production – these are a tiny fraction of the informational treasures to be mined here. Moorey’s book has a helpful chronology for the reader as well as general maps of the sites referred to, a detailed table of contents and bibliography, and a useful index. You may wish to suggest to your professional club or to a university or public library that they purchase this book. It is a very well-written, solid reference work which will not be superseded in the foreseeable future.

Judy Bjorkman recently received her Ph. D. from the University of Pennsylvania. Her field of special interest is metals and metalworkers in the Ancient Near East. She is herself a metalworker and lives in Syracuse, NY.