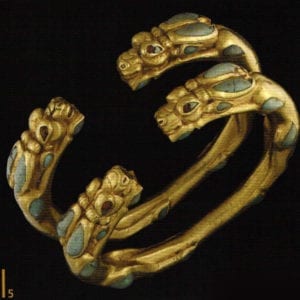 Messages from a Golden Age

We know only the images of a desecrated land. Spent, inaccessible and worn by a decade old war. Whatever was not destroyed by bombs, it was killed off by fanatic merchants of holy war. When on March 12, 2001, in the Afghan site of Bamian, we saw the raging Taliban blowing up the colossal Buddha statues – human cultural legacy – they also stormed the National Museum, founded in 1919. Barely noticed by the general public, they destroyed everything what they believed was incompatible with Islamic beliefs. Testimonies to a manifold high culture of art and culture were in dire peril. 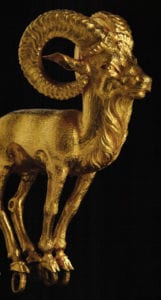 Until this day, an unscrupulous art market, lodged between the Far East and Europe, interwoven with local plunderers, has benefited from this turmoil. They not only exploit the pieces from the museums in Kabul and the provinces, they also rob the excavation sites. This means that the origins of the finds disappear, never to be seen again. At least frantic scientists have been able to photograph the vast array of finds held by the antique dealers in the country in order to ensure that they are accessible for research before they disappeared for ever into private collections.

Last year at least, rumors that the last President of Afghanistan, Nadschibullah, murdered by the Taliban, had hidden some precious pieces in the National Bank and the presidential palace, were thankfully confirmed and were indeed revealed once more in 2004. Some of them could be marveled at in the Guimet Museum in Paris until the end of April. The 220 exhibits portrayed an impression that French, Italian, American and most recently Soviet-Afghan archeologists had derived from the North of the country over the last century. According to this, there had been a center of goldsmiths in ancient Bactria for 3,000 years, since the Bronze age therefore. The basis for this high culture was that the now waterless steppe of the Bactrian plains had been richly irrigated by the River Balchap and its numerous tributaries over 4,000 years ago and therefore permitted rich harvests in the fertile, alluvial soil. 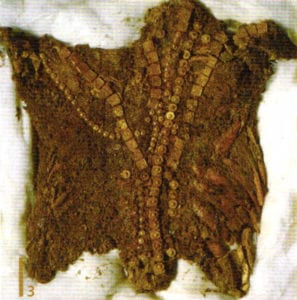 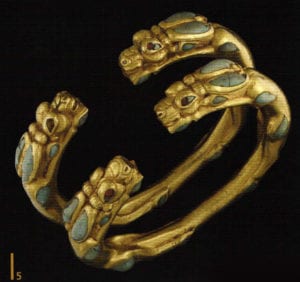 The work from the 3,000 years between the Bronze Age Bactria and the realm of the Kuschan Emperors displays Afghanistan at its crossroads between Hindu culture and Mesopotamia. The relations between Bactria and the major antique empires of the Assyrians and Persiand were fraught. The conquests by Alexander the Great led to hellenization of the region, which allowed the kingdom to grow between the Kabul Valley to the Indian subcontinent. Nomadic steppe peoples, displaced by the Huns from their indigenous settlements areas, invaded one and a half centuries BC. In the middle of the first century AD, Kuschans from southern Siberia founded an empire, which stretched from the Ganges basin to the borders to China. It was not until the Arabs invaded around 642 that the independence of Bactria came to an end under the primacy of Islam.

The historical development is also mirrored in the goldsmith work. Testimony to this is found in the 3,000 year old gold vessels from Fullol. These are testimonies to the little known cultures settled in Bactria. The men smashed their findings with an axe in order to divide it up. The receptacles are now compressed and are on show in pieces. In 1978, one year before the Soviet Union invaded, the Soviet archeologist Victor Sarinanidi discovered six untouched and regal nomad graves. And the surprise was great when the team of archeologists discovered the tomb of an older aristocrat below the ruins of the temple close to the city of Shebargan. 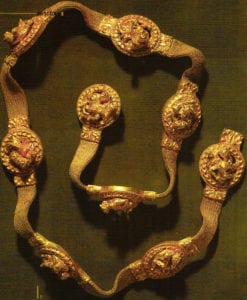 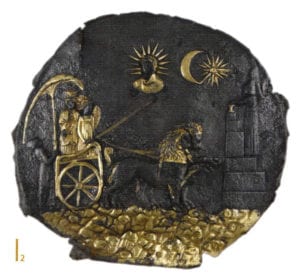 Seven other graves were discovered over the course of the excavation, each of which resplendent in sparkling gold and gemstones. Around 20,000 individual pieces were recovered and dated (100 BC to 100 AD). Tiny, pallet like gold plates, clasps and belt buckles and even golden bracelets weighing up to two pounds. An extraordinary mixture of Greek, Bactrian, Roman, Indian and Chinese cultural influences was revealed here. Entirely identical rings in two – probably as protection against grave robbers – unmarked and untouched graves indicate that it must have been relatives of a Mongolian aristocratic family. The wonderful variety of patterns and styles seen in the golden items indicate that those buried must have ruled over various tribes of peoples. For example, one pendant shows Bactrian ram heads, Chinese dragons and animals from Mesopotamia. Similarly as was revealed in the tomb of Tut-Ench-Amun, the dead were lavishly clad for posterity. Even including the symbolic coin between the teeth for the crossing of the soul into the realm of the dead. Fantastic objects were found. Among them was a collapsible crown, belt clasps, bracelets and daggers, fashioned in the style of the scythes and with Greek-Roman motifs, forged using the gold from the Altai Mountains. There was also garnet from Rajasthan, lapis lazuli from Afghanistan, jade from China and turquoise from Iran.

Another treasure, the one from Begra, was discovered by a French academic couple in 1938/39. Almost 500 objects from two obviously sealed chambers paid testimony to the connections maintained by the Kuschan Empire in the first century AD. It includes Indian goddesses made of ivory and also Chinese lacquer work, Hellenist bronze items and not least the oldest example of Greek-Roman glass art. In view of the fact that, as was common at the time, the finds were divided up between France and Afghanistan, the treasures were united for the first time once more for the exhibition in Paris. 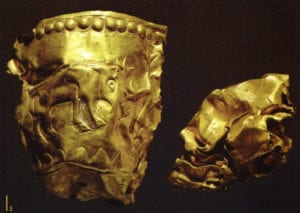 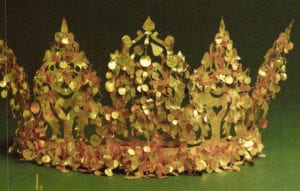 The National Museum in Afghanistan was opened partially once more in 2004. Grounds for a larger new building are earmarked for the finds that have as yet not been exhibited. Parts of the entrance prices for the Parisian exhibition will flow into this project. Additionally, the French museum will pay for the restoration of the exhibition objects. Negotiations for additional exhibition stops with museums in Amsterdam, Turin and possibly also Bonn, the United States and Japan are in preparation.

All articles by this author
Previous Storytelling Stones
Next Dimensions: A Question of Space and Time
Social media