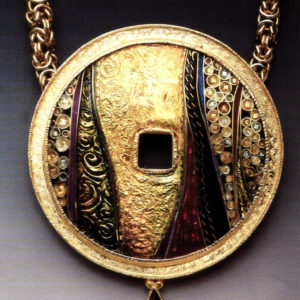 An artist’s studio can tell a story about the life and attitudes of the creative soul who inhabits the space. Marilyn Druin’s studio was a reflection of a life well lived. When the Druin’s built their new home in Avon-by- the-Sea, New Jersey, in 1999, her studio was the heart, the very center, of their new home. Situated on the main floor, the 35′ x 20′ foot room adjoins the main living space, encouraging family and friends to wander in. The walls are adorned with announcements for shows, beautiful objects by Marilyn and other enamel artists, inspirational notes tucked here and there, and an array of tools and materials and works in progress. The studio has a pulse. 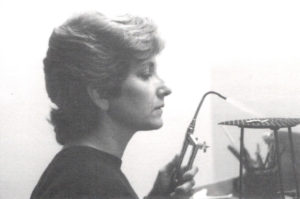 Marilyn Druin at work in her studio.

The most telling object in this studio sits in the center of the room. It’s a 31″ tall mandrel on a 20″ high hand-built base, and it was one of Marilyn’s prized possessions. The mandrel, originally in the Faberge studio in Russia, was given to Marilyn by Milton Naham, the great-grandson of Julius Rappaport, the head metalsmith for Faberge. Rappaport’s son brought it to America with him nearly a century ago. It was Marilyn’s talisman, “tying her directly back to Faberge through the hammer marks on its surface.” She lovingly rubbed her hands over it whenever I visited. She talked about the responsibility that came with the gift: to build on the best traditions from the past in order to ensure the future of the enamel. Marilyn, like the mandrel in her studio, was centered. She was a force that held family, friends and the enamel community in her energy field.

“When we founded the Enamel Guild North East ten years ago,” says Sandy Kravitz, “Marilyn was our leader. She has always exemplified for me a quote from Ralph Waldo Emerson; ‘Nothing great was ever achieved without enthusiasm.’ With her infectious enthusiasm and hard work she lead us to become the largest regional enamel guild in the USA, giving us all the opportunity to expand our horizons and have great fun along the way. Marilyn’s enthusiasm and love for life certainly created greatness. We see this today in her wonderful glowing enamels and it is reflected in her family and friendships.” (Marilyn’s web site: www.druin.org.)

Ganoksin is sponsored by
www.druin.org.) 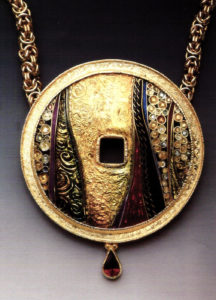 Marilyn began to work in enamels in the early 1960s, mastering increasingly more difficult techniques. Starting with silver cloisonné and a pictorial style of imagery, she moved to abstract surfaces in guilloche and basse-taille on gilded metal. Finding her signature colors and forms in the 1980s, Marilyn’s work became identifiable through her Titian reds and Persian golds and blues. Her colors were supported by her strong forms and geometric shapes. She switched to high karat gold and added stones to her works in the 1990s. Mandala and Byzantium are two outstanding works from the mid 1990s. Mostly self-taught, she was recognized by the enamel community for elevating the medium through controlled experimentation with engraved and etched metal and exquisite translucent glass surfaces.

Describing her process in her own words:

“I fabricate a rigid metal form, and then alter the basic metal surface to add depth, texture and definition to the smooth and fluid nature of glass enamel. Modern metalsmithing techniques are combined with the ancient art of cloisonné and bassetaille enamel. This involves a process by which high quality glass is fused to a silver or gold surface. . .No other media can glow with the luminosity and depth of captured fire which is enamel’s alone.”

Ullysses Dietz, Director of Crafts at the Newark Museum said, “Whatever directions she went in, she was first and foremost a colorist of unparallel subtlety and skill.” 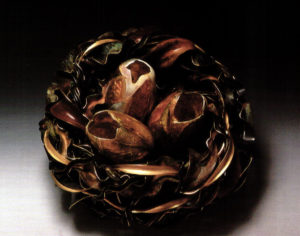 Marilyn was a founding member of the Enamel Guild North/East in 1991 where she served as President until 1998. She also served as Trustee of the Enamelist Society from 1993-1998. Dietz recalled Marilyn approaching him to do an enamel exhibition at the Newark Museum in the late 1980s. That was a catalyst for him to examine the museum’s holdings and place in the history of enamel. Besides staging a number of exhibitions, the museum became the source for enamel education in New Jersey when Marilyn started an enamel program there. “As long as I have been paying attention to enamel, she is part of the picture for me. Her generosity of spirit in teaching what she had learned and wanted other to know; she created a legacy by sharing.” She taught workshops in Canada, East Carolina University, The 92nd Street Y, at the Zimmerlie Museum, to name a few. Through the Enamelist Society and the North East Enamel Guild, she exhibited her work and gave workshops internationally. Golden Sampler, created for the International Indian Enamel Exhibition in New Delhi, has been acquired by the Renwick Gallery, Smithsonian American Art Museum in Washington, D.C.

During the past decade, Marilyn’s work achieved national recognition. Her signature use of texture and color allowed her work stand out in an increasingly sophisticated field of enamel. This may be seen in Metalsmith Magazine’s” Exhibition in Print 2003,” sponsored by SNAG. Aaron Faber Gallery in NYC represented her work at SOFA 2002 and 2003. And an unusual collaboration between Michael Good and Marilyn, started through mutual admiration in 1996 at the Baltimore ACC Show, led to enameled gold and silver stands for rare pearls, Octopus Sculpture. They went on to produce Bird’s Nests and Eggs, that are exceptional for their beauty. Marilyn added enamel to Michael’s anticlastically raised 24-karat gold nest forms and created jewel-like eggs to rest inside. 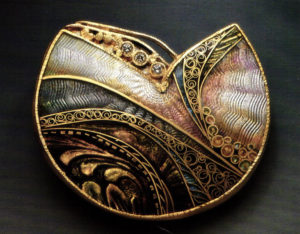 “Marilyn’s focus as an enamelist was in color and light. Mine, as a metalsmith is on movement and form. Like yin and yang we knew we were two parts of a whole…. We were in a timeless place, where words were irrelevant and boundary non-existent,” said Michael Good.

Harlan Butt, whom Marilyn considered an exceptional enamelist, regarded her the same. “In a 1998 review in American Craft I chose seven ‘treasures’ from an exhibition of 127 objects which I felt exemplified the finest work being done in contemporary enameling. One of those pieces was Marilyn’s Byzantium, an enameled pendant with chain… Since that time I was privileged to see a number of other works by Marilyn, including her pieces in the first International Indian Enamel Exhibition (New Delhi, 1999). The care and skill, the attention to detail and sensitivity to color, form and pattern, could only be described as exquisite. It was a thrill comparable to the handling of a Faberge or a Lalique,” (web site.)

Her retrospective exhibition at the Newark Museum, Capturing the Sublime, The Enamels of Marilyn Druin, June 2003-January 2004, highlights a progression of involvement with enamel art that places her work in a continuum of tradition and beauty. Thirty-eight pieces from the 1960s through 2001 demonstrates her talent and vision. Jewelry, goblets, bowls and brooches reveal the past and future of enamel. Marilyn was very aware of this continuum when she referred to her own work, “What if the next idea is a better one? Most of my pieces become obsolete before they ever reach completion. The creative process is rather linear…. Each new piece is an attempt to complete unresolved aesthetic and technical problems of previous works.”

One of the final jewelry objects Marilyn finished before her untimely death in 2001 was a work named Avon Ocean and Sky. (2001). In this small object, the reflections of a life well-lived are evident. She was a close observer of nature, and the sea and sky were her inspiration. She used her prodigious technical expertise in guilloche and basse-taille to create a metal surface as active as the sea. Her sublime sense of color was translated through repeated applications of glass, up to 70 or 80 layers, to capture the shimmering sky. For Marilyn, this was “like prayer, praise to the Maker who creates all things.” 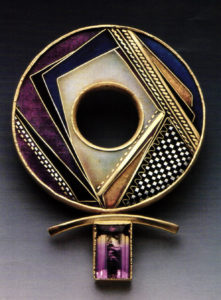 Marilyn was aware of a legacy: the mandrel in her studio, the history of enamel and her place in enamel. She taught others so that the past and present could build a future. The year before her death, she started teaching her enamel techniques to her daughter Erica, now a recognized enamelist. “You need to learn the enameling from me, others will teach you the metal,” she told her daughter.

Unable to finish her last eggs for Bird’s Nest 3 for a show at Aaron Faber Gallery before her death, Erica completed them for her. “Mom was no longer here physically, and based on my limited experience I shouldn’t have known how to complete those eggs, but I did.” They had worked together in the studio, like a Faberge atelier, Master teaching apprentice, tools passed from hand to hand, two pairs of eyes staring into the kiln. Erica learned enthusiasm and curiosity about the medium from Marilyn. When she expressed doubt that she could achieve greatness in enamel like her mother, Marilyn said, ‘You’ll never make the perfect piece and you shouldn’t want to, because if you did then you would be done with enamel.”

Marilyn’s legacy is that she is not done with enamels. Through her love of the medium, she made others love it as well. Her beautiful objects are the reflection of a life well lived.

Quotes are from interviews that the author conducted; others are excerpts from Marilyn’s web site: www.druin.org.

Dr. Geraldine Velasquez is Professor of Art at Georgian Court College in Lakewood, NJ. Founder of The Forum for Research and Criticism in the Crafts at Georgian Court, she invited Marilyn to contribute to the first monograph, The Creative Impulse, published in 1998. The author has published many articles and reviews on enamels and crafts.

By Geraldine Velasquez [Volume 23, Number 1, February, 2004]
In association with