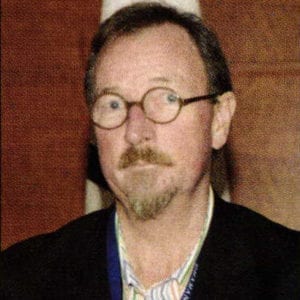 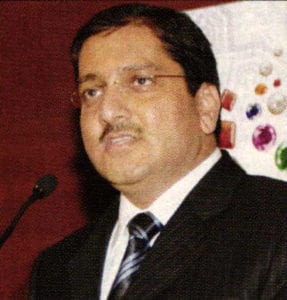 The star of the conference was undoubtedly Dubai itself. Across the city, participants could see the signs of Dubai’s economic boom: cranes rising toward the sky; billboards advertising new business centers, shopping malls, and luxury housing; and the influx of workers from all over the world, needed to fill the host of new jobs that had been created. 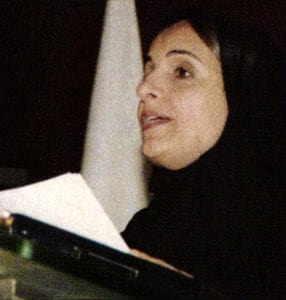 Chandraprakash Siroya, vice chairman of the Dubai Gold & Jewellery Group (DGJG), told attendees that Dubai has a jewelry market worth $3 billion, with a 15 to 20 percent growth per year. The DGJG has spent $75 million since 1996 positioning Dubai as a tourist market for jewelry. According to one estimate, 7 million tourists visited Dubai in 2006, and 90 percent of them bought some sort of jewelry. 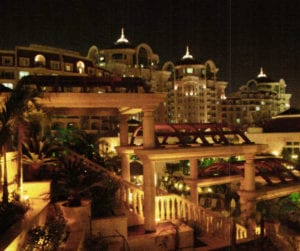 The courtyard of the Al Murooj Rotana Hotel & Suites.

With no sales taxes and an existing gold souk that on any given day holds 10 tons of gold jewelry, the emirate has already established itself as an international buying center for jewelry. While the vast bulk of current sales are in gold, the region is starting to open up to the possibilities of colored gemstones. 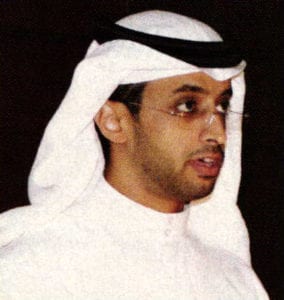 “The residents in the UAE have a very strong liking for colors and colored stones,” Siroya said, “but the potential of this region for the colored gemstone industry has not been much highlighted in the past.”

The Dubai Multi Commodities Centre, a government-sponsored trading center for commodities of all kinds, has launched the Dubai Gems Club to help build sales of colored gemstones, pearls, and gemstone jewelry. They have already begun retail training programs for jewelers in Dubai and hope to expand their operations.

“I can’t help saying that given the right focus, and with the active support of the government of Dubai, we in the next five years will be the largest colored stone marketplace in the world,” Siroya concluded.

Sarwat Razzak of ARY Jewellery L.L.C. presented the results of a survey of Dubai consumers about their attitudes toward colored gemstones. Of the 1,500 interviewees, 64 percent were from South Asia, while only 28 percent were ethnic Arabs, a percentage that reflects the current makeup of Dubai’s population. 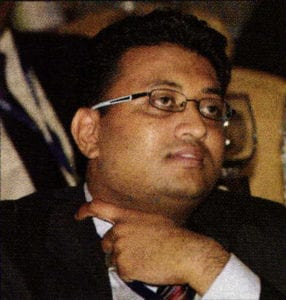 The survey found that 72 percent of participants didn’t own any colored stones at all. Consumers have a lack of confidence based on limited knowledge about colored gemstones, especially issues like treatments, origin, branding, and certification.

Certification is a key issue in Dubai, which has built trust in its jewelers based on strict government regulation of disclosure. Eighty-seven percent of participants said that they would insist on buying certified colored gemstones. Of those, 55 percent preferred certificates issued by the government or a government-approved agency, compared to only 18 percent who would prefer one issued by a gemologist.

Certification is a key issue within the gem trade, too. One of the featured panels at the congress brought together laboratories from all over the world to discuss the role that certification plays in consumer confidence.

Henry Hänni of the SSEF Swiss Gemological Institute kicked off the discussion by pointing out that the trade had, to a certain extent, created its own mess. “[If you are worried about consumer confidence], do not damage their confidence. It was not the labs that invited the producers of synthetics or [simulants] to join the industry,” he said, arguing that selling such products alongside natural gems is part of what created the confusion. He added that if the trade disclosed factors like treatments and a stone’s origin throughout the supply chain, there wouldn’t be such a need for certification. “I believe that confidence is present by saying these things in clear words.”

“I think it boils down to two things,” said Shane McClure of the Gemological Institute of America (GIA). “One, [customers] want to know what they’re buying is what it’s represented to be, and two, that they’re getting a good price. . . . Knowledge is key at the point of sale. You can have all the reports you want at the point of sale, but if [the retail salesperson] can’t communicate what’s in the reports, it’s not going to inspire much confidence.” 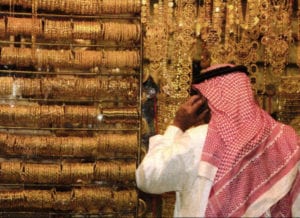 In response, laboratories cited the difficulty of being sure about origin, and the pressure to provide origin reports even when they’re not certain of the result. “I hear one customer on the telephone say, ‘Even if [the origin on the certificate] is Madagascar, it’s better than no origin.’ ” said Hänni, referring to the fact that rubies certified as being from Madagascar would fetch a lower price in the wholesale market than rubies from, for example, Myanmar (formerly Burma). “The trade puts stress on labs to come out with the best opinion we have, and sometimes the evidence is conflicting.”

Vincent Pardieu of the Gübelin Gem Laboratory in Lucerne, Switzerland, added that when new deposits are discovered, it takes a long time to get samples and analyze them so that the laboratory can correctly identify the origin of those gems. “We are not God. We can try to do our best, but you cannot ask more than our best.” 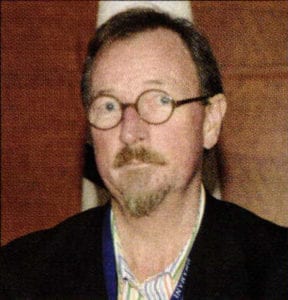 Richard Krementz of Krementz Gemstones, who was sifting on the panel on behalf of the American Gem Trade Association Gem Trade Laboratory told the audience that he had a plan that would address the origin problem: “What we’re [attempting to do] is set up an appeals panel, so if a stone has a report from three different labs, and has substantially different results on each report,” a group like the Laboratory Manual Harmonization Committee could meet to arbitrate. “Members of the group who are not the three labs [who issued the original reports] can engage in conversation with the labs who issued the initial three reports and see how they came up with that conclusion. They reach a decision, if possible, of what the correct results would be on a stone.”

But perhaps it was Hänni who best summed up the mood of the gemologists at the gathering: “There is no master gemologist sitting above us [who can say for certain who is right or wrong]. And I think, when a client pays for two reports, he has the right to two different opinions.”

Continuing the theme of consumer confidence, another panel session addressed the forces shaping today’s gem industry. Russell Shor of the GIA delivered an analysis of the world colored stone market — comparing its marketing activities unfavorably with gold and diamonds — and concluded that if the gem industry is to grow, the key is collaborative promotion and transparency in disclosure and marketing. 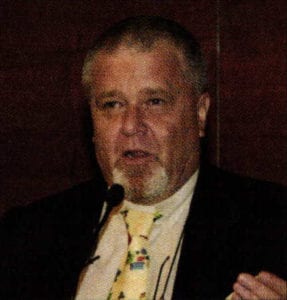 Robert Weldon, also of the GIA, followed up with a compelling argument for fair trade. “Fair trade changes must occur because consumers are demanding it,” he said. He cited a study that showed that 83 percent of “millennials” — the up-and-coming generation of consumers — are more likely to buy from a company that is socially responsible.

Other congress presentations covered mining development initiatives in source countries like Nigeria and Pakistan, and the developing gem markets in China and India.

At the end of the congress, ICA members elected a new president, Australian Andrew Cody of Cody Opal. In a press conference following the congress, he acknowledged the hard work that outgoing president Joseph Menzie of Joseph Menzie Inc. had done, and the important work that board members were doing to develop an ICA presence in China, developing a social responsibility program to support miners in key source countries, and finding partners in international gemstone promotion. His own goal, he said, would be to strengthen the ICA s relationships with other associations around the world.

“I want to see, in the next few years if possible, the world gem and jewelry industry as a very solid group, working together [to achieve all our goals],” Cody said. “It is achievable. It may not be achievable in my time, but I want to start now.”