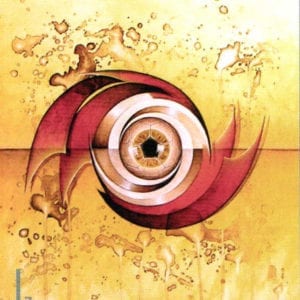 Help!!! The football world championship is coming to Germany. Ahead of the world championships, there’s a flood of products inundating consumers to keep fans happy and producers awash in profits. This article provides a cross-section of the more or less usable and more or less tasteful football accessories ranging from jewelry made of platinum to foot mats made of plastic. 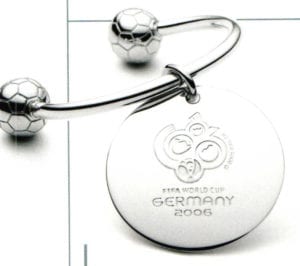 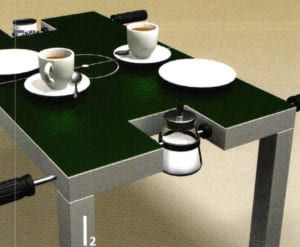 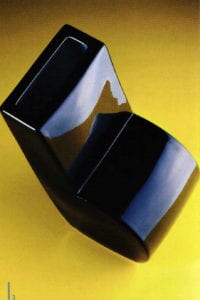 The German artist Christian Hahn designed a larger-than-life, black whistle for the “Kunst in Prozellan” (Art in porcelain) project of porcelain producer Rosenthal 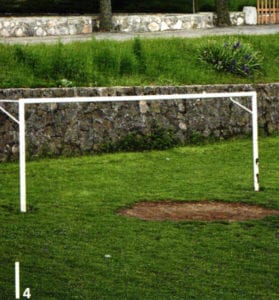 Football goals are objects of photographic art. Nicola Schudy photographed various goals around the world – this one in Aiguines, France

The business with popular sports is really on the ball. As soon as Germany was named as the host country virtually every branch of what is termed the lifestyle industry and linked in even the remotest fashion to football launched production of football articles. Now, just a couple of weeks ahead of the kickoff at the first match between Germany and Costa Rica in Munich, the sales of devotional articles worshipping the divinity of football has reached its absolute pinnacle. For months, pennants, cushions and scarves are being sewed in the colors of all football nations playing, pictures have been painted, CDs recorded, calendars and photographic books have been printed and precious metals have been cast on football-shaped jewelry. There’s hardly a sector that has not taken advantage of the trade with athletic events in the media or that willingly foregoes the profits to be earned.

The jewelry and watch industry also has major interest in a football festival returning every four years. Manufacturers and retailers have identified the marketing opportunities of the Fifa World Cup and they’re searching for ways to take advantage of them. But, the heads of the world football association Fifa have not made it easy for profit-hungry enterprises Stringent rules on using writing, logos and the mascot Goleo including restrictive licensing agreements make doing business difficult. 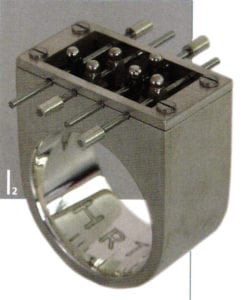 Movable ring: These retro balls, made from goats’ leather, are in constant motion – thanks to ball bearing technology. From Niessing

There are only a few manufacturers such as Schumann Design in Delmenhorst, Germany or the watch manufacturer Casio that have been able to snap up agreements for manufacturing world championships products with the official logo Schumann Design has a license from the world football association to produce caoutchouc bangles in the colors of the German flag and the label “2006- FIFA World Cup”, chains with the world championships cup and pendants with the FIFA emblem. Many a fan will wear products someplace visible on their bodies for Germany’s football – but, in terms of design, these accessories are pretty tame.

Jewelry creations are somewhat livelier if they don’t rely on the official logo, but are more liberal with the way they launch the athletic idea in word plays or commemorating earlier victories or defeats. A case in point is the retrolook miniballs thought up by the jewelry manufacturer Niessing made of genuine goat’s leather that fans can wear as key ring pendants or finger rings. 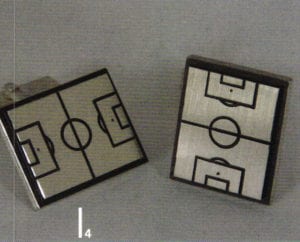 Football pitch as cufflink – jewelry for the sporty, elegant man, from Neil Saad 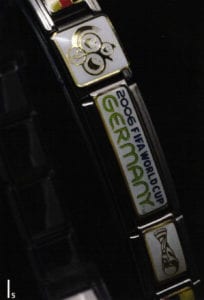 Metal bracelet from Schumann Design with licensed logo and writing 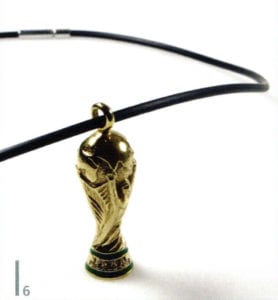 Object of desire: The trophy as key ring for all those wishing to win at all costs. From Schumann Design 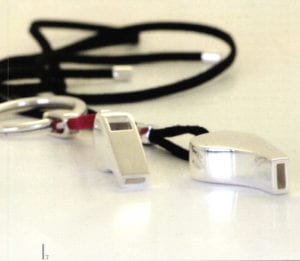 Whistle as necklace, made by Quinn in Sterling silver 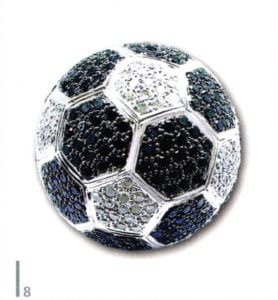 Diamonds allover: The precious soccerball by Diafuego is a fantastic piece of jewelry and a twinkling eyecatcher, too

The Hamburg-based designer Neil Saad has designed silver jewelry for anyone who plays, watches or talks about football. In his eyes, anything that has to do with football can be worn, even if it’s a real kicker table on your ring finger. The Jewelry products that jewelry companies and designers have thought up for the pendants of the most popular sport in the world range from silver whistles on your bracelet through enameled red and yellow cards as chain pendants right down to cufflinks in the form of miniature football fields.

Nobody is really surprised about the variety of captivating, high-quality and totally superfluous product ideas having to do with football in interior design and fashionable accessories. That includes sitting balls made of horse hide and armchairs made of leather soft as gloves, goodies bowls made of porcelain in the form of football stadiums, foot mats with a marked eleven-meter point or handbags with leather seams like those found on balls. 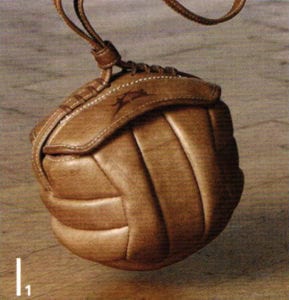 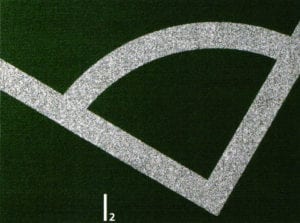 Get a grip: soccer foot mat made from coconut fiber 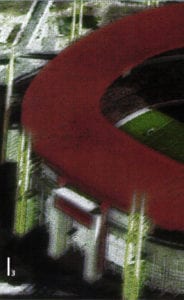 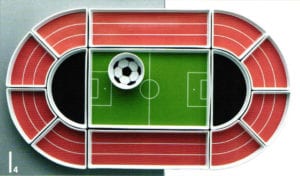 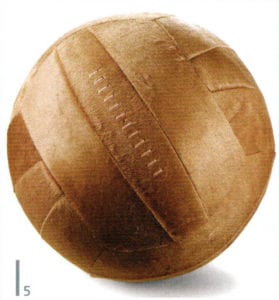 For the lazy: fur ball seat from Baldessarini 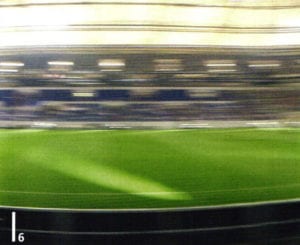 Arena4: photographer Gudrun Kemsa is famous for her moved images

But it is amazing to discover that football and art are so close to one another as witnessed by the numerous exhibitions, books, photographic works, picture books and artistic calendars. A prime example is the German Publishing House for Modern Art based in Nuremberg that is presenting a football culture calendar together with the German Academy for Football Culture to focus people’s artistic attention to the leather spheroid. Painters, photographers, caricature artists, writers, journalists and illustrators contributed to its creation.

There has rarely been a football world championship that has been accompanied by such a creative, sophisticated and extensive culture program like the football world championship 2006 in Germany. 48 projects from music, theater, literature and art are on the program ranging from a HipHop festival to a Brazilian dance theater. A variety of German and international artists are devoting their attention to the phenomenon of football. A good example is the poster edition of Fifa that 14 international artists were signed onto ranging from newcomers in contemporary arts to superstars of the international art scene. Andreas Gursky, Rosemarre Trockel, Tim Ayres, Markus Lupertz or the Luo Brothers are some of the people involved in this art project.

Even the Berlin-based web photogallery Lumas that features football art including selected works of 50 both young and notable photographic artists in editions ranging between 75 and 100 copies as original hand-signed photographs at affordable prizes. Art-loving football fans will find photographs by Gudrun Kemsa, David Steets, Nicola Schudy or Thomas Neumann on the gallery’s list. Its founders and owners Stefanie Harig and Marc Ullrich have opened five edition galleries in Berlin, Hamburg, Munich and Düsseldorf since setting it up 4 years ago. 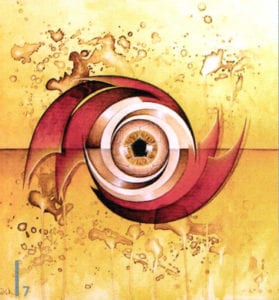 All eyes on the ball: Mirada Futbolistica is the title of this painting by Chilean artist Otto Alexis Schade

Football is a profane mystery, an international language of a unique nature. This is attested to by the works of the six artists Bill Brandt, Robert Davies, Jens Schwarz, Nicola Schudy, David Steets and Stephan Zirwes. As much as they attempt to build up a distance to the subject, they fail to fully disentangle themselves from the fascination of the mass phenomenon that is football. And as different as their positions may be, they all tell a tale of the passion of football, the excesses and brutality, but also dreams of home, youth, success and friendship which are forever linked intrinsically to it.