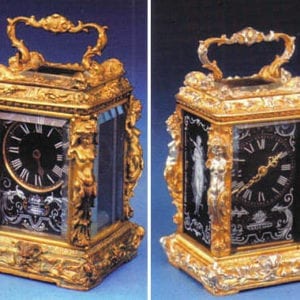 Small ornamental clocks were among the medium priced ornamental objects that were in huge demand in the 19th century. This gave opportunities for enameled decorations to be added for a valuable, individualistic appearance for every piece, even when the actual metal clock housings were mass produced to a standard format.

One of the most successful styles was the copying in miniature of the larger, square-cased portable clocks widely used in the 19th century and known by their French name of pendules portative or otherwise as carriage clocks. These had the important attribute that the movements did not lose accuracy when these clocks were moved about.

This was a breakthrough of the period in clock design and the clock cases were made to be robust and with swing handles. The miniature versions of these, however, while recreating the overall shapes, were intended for the display cabinet or dressing table and accuracy of the timepiece was secondary. In fact, to suit the reduced size requirements, watch movements were fitted into the miniatures, and these seldom had the accuracy of the full sized clocks.

In the 19th century, the miniature clocks were catalogued as Mignonnettes, fancifully translated as ‘little darlings’. The smallest Mignonnette was typically with a height of 9.5-cm (3-3/4 inches) with the handle up, while other formats could be up to a third larger. Those that followed the basic structure of the portable or carriage clocks, with swing handles could be in the rococo manner with corner columns as caryatids.

Alternatively, plain corners were used. The sides and dial plates were made as separate components and carried the decorative treatment with enamels or other materials. Another popular style was with a more monumental structure, similar to regular mantelpiece clocks: these had narrow pedestals, a square central case and angled top. For these, all the flat surfaces could be clad with painted enamel plaquettes.

The enameling methods most suitable for the small format were those of champlevé, guilloché and filigree, usually on bases of silver or silver gilt. The painted work was on copper bases. The painted styles were in the fashion popularized in Vienna in the late 19th century, or in the Limoges treatment.

For champlevé and guilloché plaques, for this application, the silver plaques were prepared by engraving or engine-turning. For the hand engraving method of champlevé, the metal was cut away between outlines reserved at the original surface level, leaving well-defined structuring outlines for the design. For guilloché, the silver was given geometric patterning by engine-turning, retaining a border at the original level, and clear enamels were fused over such striated designs. For champlevé and guilloché work the standard way of finishing for a refined and high gloss finish was with stoning and polishing of the otherwise slightly undulating fused surface.

The filigree enameling method could be applied directly to a ast form such as a small clock case. The raised-up cell-structured design could be produced with silver wires to create arabesques, lappets, and floral or figurative shapes. A similar appearance, but with a more robust, rigid cell design could be produced by the casting. A filigree-style design did not need to cover the whole metal surface and could leave the enameled parts contrasting and slightly higher than the silver base. Such a design could be enhanced with emerald green or turquoise blue enamels to emulate inset gemstones and could follow the asymmetrical Oriental or Art Nouveau styles of the early 20th century.

For the painted work on such small luxury objects, the overglaze or on-enamel methods were effective for delicate figurative pictures with bright, dense surface tints. For the Limoges style, a suitable quality of white enamel was worked up in the grisaille manner for a cameo-like figurative or arabesque design over a dark background.

Enameling of that period was one of the many flourishing minor industries that were split into several specialist processes. The craftsmen worked in either precious metal or on copper bases. The engraverenamelers did not generally work in the jewelry techniques of cloisonné or filigree. The painters added the images on plaques prepared by the enamelers, and they too specialized in the different methods, and therefore worked either with overglazes methods or specialized in the Limoges pictorial techniques.

The overglaze paintings on enamel followed the prevailing modes and designs were chiefly taken from published pattern books launched by Parisian designers, then adapted by other makers. The ateliers of Vienna, geared for decades to recreating Paris styles in many materials, specialized in overglaze enamel painting within this convention. These painters excelled in combining small figural scenes with well-defined outlines and good colors, giving the desired ornamental effects with light-hearted figurative subjects, in the style of allegories and themes from classical mythology.

This was a useful artistic device for illustrating sunny landscapes peopled with idealized gods, goddesses or nymphs with clinging robes, and these themes were produced in countless permutations. For Limoges styles, on the miniature scale, the aim was to produce an illusion of low relief carving, depicting ethereal figures with diaphanous draperies and delicate, swirling patterns.

What all the enameling methods for luxury objects had in common was that the finished object looked ultra-refined and valuable, and with a sophisticated design, remaining in fashion over a long time. The buying public appreciated the way enamels could add an apparently delicate glaze or painted images while these surfaces were immune to fading or yellowing.

Such objects of vertu were generally carefully handled, so that even the paintings that were not given a protective clear enamel coating have remained in good condition for over 100 years. They continue to give interest and amusement to present-day collectors and have inspired the making of near replicas and modern work in the genre.