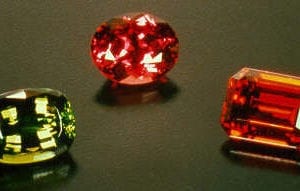 Garnets are a group of related minerals which have slight variations in chemistry but a common cubic crystal structure. Many garnets fall in between some varieties and defy assignment to a specific group. When in doubt just call it a garnet.

Unless you have your heart set on a blue gemstone, you may want to look at the beauty that garnets offer at a relatively low price.

Almandine, also called almandite, garnets are often the color of a fine red wine. They are the most common garnet variety; one we typically associate as “garnet color”. Generally the colors will be dark reds ranging from violetish reds to brownish reds.

Pyropes are generally small and low in price. Fine large red pyropes are rare and will be priced in the moderate per carat range. Pyropes range from brownish red colors to violetish reds. It is easy to confuse pyrope and almandine garnets: prices and colors may be very similar. But this doesn’t really matter to the buyer because there is little reason to need to know which is which!

Spessartine garnets, also called spessartite, are orange to dark brownish orange in color; most could be described as a “root beer” color. The finest stones will be a brighter orange color which is not too brown. Most spessartine garnets are mined in typically gemmy places such as Brazil, Madagascar, and Sri Lanka. Prices will be in the low range for smaller stones; finer large stones will have moderate in per carat prices.

Grossular garnets, alias grossularite garnets, simply do not fit the common image of wine-dark garnet colors! Instead they are found in a wide range of colors including colorless, yellow, orange to green and a rare pink. Some are pastels and some are exceptionally bright and brilliant!

The most expensive and popular of the grossular garnets is tsavorite which was named after Tsavo National Park on the border of Kenya and Tanzania, where it is mined. Fine tsavorites are an intense medium green color; a few resemble fine emeralds. Tsavorites may be moderately included; but the finest qualities are eye clean. Large tsavorites are quite rare, even stones up to two carats are not abundant.

Tsavorites range in color from a light green to very dark green. The most intense medium green will command the highest price. Size, clarity and cutting will also be important factors in pricing. Fine carat or more tsavorites definitely fall into the expensive category. Paler, smaller stones may be moderate in price.

Other grossular garnets are brilliant and unique gemstones; nevertheless they are not common. An orange variety of grossular is called hessonite; it is sometimes referred to as “cinnamon stone.”

Grossular garnets are probably among the most underrated gemstones: they offer spectacular brilliance and beauty at an affordable prices. Fine grossulars will range from low to moderate per carat prices depending on color, size, clarity and cutting. Although the demand is fairly low, it is just as well, since the supply is limited.

Andradite garnets are really quite rare, but have some outstanding qualities. The most spectacular garnet of all is the demantoid. Demantoid garnet is an intense medium green andradite. Andradite garnets have the highest refractive index of all the garnets, so they are potentially the most brilliant. This type of garnet also has a high dispersion so larger stones will appear exceptionally “fiery.” The only problem is finding one! They are very rare. In the l9th century, demantoids were mined in Russia, but most were quite small. They can be found in antique jewelry but they will be expensive.

Perhaps most of the demantoids on the market today are in the London antique jewelry shops. Dealers who may not be gemstone experts definitely know when they have a demantoid piece! The finest examples of demantoids will have a “horse-tail” inclusion; the horse tail inclusions are fibrous strands of the mineral byssolite. Demantoids with horse tail inclusions will command a slight premium in price. Larger demantoids, one or two carats in size, will fall in the expensive price category. But you may have to look for years or go to the Smithsonian to find a fine one.

Andradite garnets also come in yellowish-green colors and in brown hues. These lack the spectacular beauty of the demantoid, but they, too, are rare.

Rhodolite is a beautiful pink to violetish red garnet which was named after the rhododendron flower. Generally rhodolite is considered the “queen of the garnets” because of its distinctive feminine beauty. Rhodolite falls somewhere in between almandine and pyrope chemically: it is not considered a specific garnet subgroup in itself but denotes garnets of the rhododendron color.

Commercially rhodolite is one of the most important garnets. Rhodolite is quite available in small sizes which are relatively low in price. Very fine large rhodolite garnets are rare and are moderate in price. Top quality pink rhodolites are mined in Sri Lanka, Tanzania and Zimbabwe.

Malaya Garnet was ignored by miners looking for rhodolite for many years. Its name, malaya, means “outcast” in Swahili. Finally in the late l970’s malaya garnets were appreciated for their beauty. Malaya garnet, like rhodolite, does not clearly fall in any specific garnet type. It falls somewhere between grossular, spessartine, almandine and pyrope. It is found in various shades of orange that range from an intense reddish orange to a soft peach. The prices of malaya garnets will fall in the moderate range.

All garnet varieties are fairly brittle; settings should be chosen carefully to protect the stone. Small garnet in the more plentiful varieties are cut into a variety of shapes. The rarer types generally are cut in to the conservative oval, cushion, and round shapes.