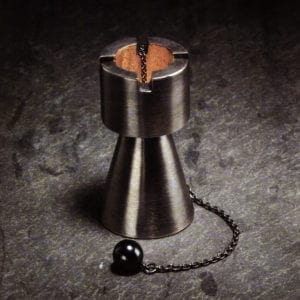 The grave of the German poet and polymath Johann Wolfgang von Goethe is marked by a simple sphere. It may seem curious that a man who has been called one of the most brilliant people to have ever lived is honored by such an unimposing monument. Yet, that marker speaks quite specifically to the intellect of the modern period, which Goethe helped to engender. Like many other of his time and today, Goethe looked longingly to the simplicity and purity of the past though he realized that humankind’s greatest achievement would be in a union of past and present and a merging of the elemental and the intellectual: the bridging of our irrational nature to the rational state which was the sole privilege of humankind. Thus that maker – simple, mathematically perfect, suggests Goethe’s attempts to reconcile what he perceived to be the opposites of our nature, to speak to both the achievement of our culture and our longing for a lost state of innocence and purity.

A similar kind of romantic intellect and longing seems to be at play in the work of Didi Suydam. At first sighting Suydam’s works appear to be inert little objects, sculptures resting in muteness, containers in simple and almost pure geometric forms. Yet even in their stasis they encourage interaction. The silver, almost satiny surface, created by sandpaper rubbed in repetitive circular motions, invites a caress. Delicately textured areas of 23k gold leaf assure a soft sparkle when the piece is finally moved from rest.

The artist came to metalwork as a sculptor, seeking to simply learn techniques for working various materials. However, at RISD in the mid ‘80s the focus was on jewelry. Not only did this curriculum force a consideration of smaller, more intimate forms, it also offered the opportunity to develop a different kind of field or backdrop for the display and experience of the finished work. The artist began to see that the wearer’s body offered more than a canvas or a completely neutral environment. It offered an interactive space, one that in its movement revealed even the most participation and choices of the wearer assured a broader arena of appeal, ranging from aesthetic appreciation of form to the immediate and sensual responses concomitant with the wearing of jewelry.

Metalsmithing techniques also had a rhythm and cadence of production that seemed more in sync with the artist’s own pace, unlike the movement necessary for creating sculpture on a large scale. This almost therapeutic repetition, the careful working of forms with a planishing hammer and the slow even swirl of garnet paper, had the same calming rhythm of process that the artist found in what she still calls “the peaceful rightness” of the forms. 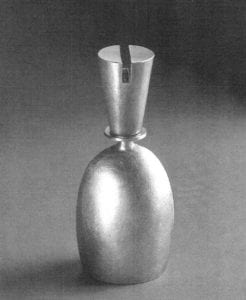 Yet even though seduced by the cadences and processes of craft, Suydam continued to look beyond the bench for her sources and inspiration. Employment at a New York based fine arts gallery exposed her to new image painting, a movement which reduced cups on a tabletop, galloping horses and swimming figures to almost essential forms. The simple iconographies of artists such as Elizabeth Murray, Robert Moskowitz, Lois Lane, and Susan Rothenberg addressed a tension between a shape and its environment and this concern seemed to Suydam to be a source of fruitful exploration in jewelry. A trip to Italy for a semester in her senior year exposed the artist to examples of the lasting permanence of the simple architectural shapes of both Roman and Renaissance architecture. The organization of complex figural compositions into solids placed on a perspectival grid by 15th century painters such as Paolo Uccello and Piero della Francesca offered a logic and a framework for the reduction of complicated shapes to their essential volumes.

Once sensitized to the ubiquity of these forms the artist encountered them throughout her purview of this history of both Western and non-Western cultures. Even hats, ranging from the conical headdresses of the Pharaohs on Egyptian steles, to the turbans found in Ottoman miniatures to the homburgs of contemporary Europe, caught her eye and seemed to speak of the human’s desire for pure and elemental configurations. 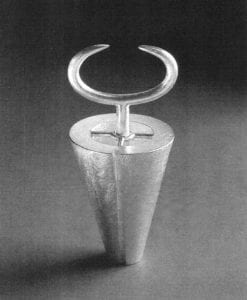 Like other artists, Suydam had an continues to have an interest in the varied forms and iconographies of non-Western cultures, though Suydam’s borrowings seem more sensitive than that found in the work of many of her contemporaries. Instead of appropriating cultural forms wholesale, as if Western culture has no rich iconography or spiritual values and traditions of its own, Suydam finds in certain artifacts those shapes which seem to link cultures, shapes which are so basic as to be shared across the divide of both language and epochs. The artist looks carefully at objects from ancient Egypt, Medieval Europe, and Africa, among others. She then distills from these varied images and shaped a commonalty, an essence, the seemingly timeless and universal shape that suggests fish, bull, jug, hat, or dwelling. Yet the artist does not merely copy the geometrically perfect shapes of the cylinder and the cone nor does she reduce the variety of nature to a geometrically limited vocabulary. Instead she uses the simplified forms as elements in an alphabet, combining these few letters to create a rich though still elemental poetry.

The well crafted works demand the heft of the hand. One must roll them in the palm like weighty river stones, receiving comfort from the firm but surprisingly light shapes. And these shapes can be easily and powerfully perceived with closed eyes and by shutting one’s hand around the form with no fear that anything will break or snap. Like a fine container the pieces demand physical interaction. They are never just an object to wear.

Yet, for all of her interest in the sculptural and tactile appeal of the pieces, the artist has never lost sight of the fact that in adornment it is the backdrop and the interaction of the body that has traditionally encouraged the rich, sensate interaction that is the realm of jewelry and Suydam has employed many traditional strategies to insure such an experience.

In her early pieces, necklaces and brooches, in spite of their sculptural “purity”, were still meant to placed on the landscape of the body. The positive and negative spaces of object and wearer interacted. The wearer’s movement caused a pendant to swing, or a brooch might flash in the light or occasionally disappear into its surround. More recent work however has sought other ways to encourage and even force an interaction between both the landscape of the body and the conscious physical activities of the wearer. 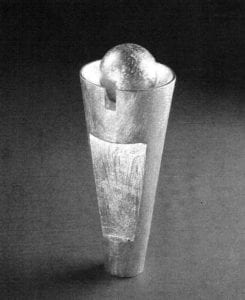 Many of the newer necklaces have equally significant elements in both the front and the back. Sometimes symmetrical and balanced in weight and relative size, these elements create an equilibrium between front and back, though each piece reaches a different stasis as it is worn by distinct individuals. Cones, miniature towers and minarets, and small jug-like forms roll across the body, swing to and fro and with a more active and quick movement the pendant may, for a moment, flip upward, the heavier base twisting above the point where object joins chain or cable.

When at rest, certain necklaces and pendants appear to be vials or mysterious containers of sacred unguents. Only after picking them up does one realize that the chain is contained within. There is a calming and soft “zing” that sounds as the chain is moved in and out of its holder. That song and its rhythms are intended to add to the ritual-like activity of placing a necklace over the head.

While this appeal is undoubtedly related to Suydam’s quotation and appreciation of historical forms of jewelry which were used for ritual and religious purposes. 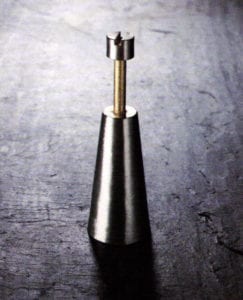 While this appeal is undoubtedly related to Suydam’s quotation and appreciation of historical forms of jewelry which were used for ritual and religious purposes, it speaks more elementally, I think, to our desires for forms that seem capable of containing and holding the secrets of the absolute. And these are secrets which the modern period particularly seems to desire. In fact, even after the pendants and necklaces are emptied of their chains and hanging freely about one’s neck there is still a feeling that the containers may continue to hold something, a kind of force, similar to a magnet’s pull or a heavy plumb bob’s resolute and magical attraction to the exact center of the earth.

While the artist will not assign specific meaning to her almost archetypal forms, she hopes that a patron’s choice of a particular work is determined to a large degree, by some genuine feeling of connection with the object. In fact, even a healthy degree of cynicism does not keep most people from being affected by the ineffable appeal of Suydam’s surfaces and forms. 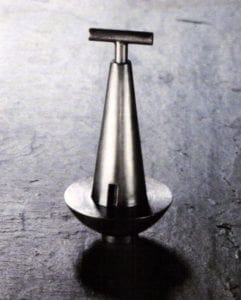 There is too the chance that the works do speak to some unconscious if not inexplicable desire in us all. Many of the shapes have both a visual and tactile relation to a child’s first toys: a ball, a rattle, the simple wooden forms that let one build architectures of fancy and dreams. The horn-like projections of many of the pendants, the simple fish, bird, and mollusk shapes of pins and earrings, all of these must have some atavistic appeal to our collective past which are no longer verbalized or even specifically recalled.

Such simplicity of form does not however result in works which are quickly exhausted in their appeal. Suydan’s geometries always lead one back to a place or time before formal language, when meaning was understood at the level of experience rather than communication. At the same time, they convey an almost futuristic purity of form. The works rest, like Goethe’s sphere, in Sphinx-like silence, seeming to contain within their planished and softly sanded walls some bit of the knowledge and meaning which the past obscures and posterity holds for some future time. 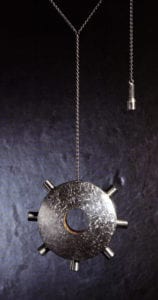 Frank C. Lewis is a critic, art historian, and the editor of Metalsmith.

All articles by this author
Previous Robert Lee Morris: Rebel with a Cause
Next Moche Metalwork
Social media