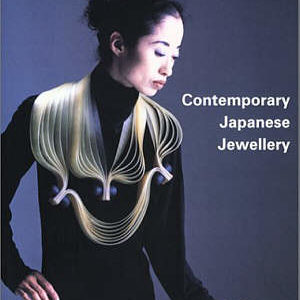 by Janet Koplos
Ganoksin may receive customer referral fees from the companies listed in this page. Learn more.

In order to introduce largely unknown contemporary Japanese jewelry to the West, British jeweler Simon Fraser, working with the advice of Toyojiro Hida, then a curator at the Crafts Gallery of the National Museum of Modern Art in Tokyo, organized a traveling exhibition titled “Contemporary Japanese Jewellery,” which opened in London in 2001. Fraser used as a starting point Hida’s 1995 show “Contemporary Jewelry: Exploration by Thirty Japanese Artists,” and Hida contributes a valuable essay to this exhibition’s catalogue as well. Fraser has written a history of Japanese jewelry and Hida an analysis; illustrated biographies of each artist follow. 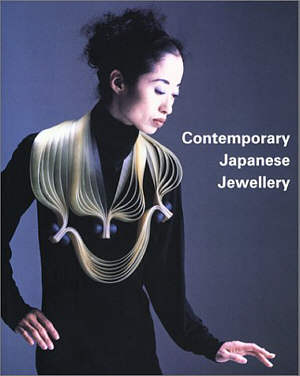 The paperback catalogue is handsomely designed and well illustrated. It is only unfortunate that some photos are repeated numerous times; I’d have preferred to see additional works or views instead. Characteristics shared by all Japanese art are present here: sensitivity to materials, graphic clarity, fine workmanship, subtlety. The selections favor Zen austerity far more often than the equally Japanese attraction to the baroque or, recently, pop; Zen tends to be the Western interpretation of what’s “really Japanese.” But not to complain: there’s lots of beautiful and interesting work in this catalogue, and it’s an education for those of us who couldn’t see the show.

Fraser’s essay, “Cultural History of Personal Adornment in Japan” makes clear the very different basis from which contemporary jewelry has arisen in that country. Gold rings (only in ancient times) and hair combs constitute the only traditional forms of adornment a Westerner would recognize (braided cords and toggles, such as the astonishing and delightful netsuke have no counterparts in the West). But after Japan “opened” to the world in the mid nineteenth century, Western jewelry of all sorts was adopted, either added to kimono and other traditional attire or paired with newly fashionable Suits and gowns. Westerners working as teachers or as advisors to factories (Christopher Dresser was one) helped to introduce foreign concepts. By the late nineteenth century such business institutions as Mikimoto Pearls and Hattori Seiko watch company had been established.

Closer to the present, the necessary brevity of Fraser’s account becomes more troublesome. He spends much time worrying about the acceptance of jewelry as art in Japan (although the same could be asked of Europe or America today), without discussing the fact that “fine art” as a category is itself a Western notion. There are gaps in the story: the founding of a jewelry magazine in 1965; the involvement of women in jewelry before recent times; the development of commercial jewelry; the connection between increased knowledge of international activity in the 1960s and the simultaneous improvement of the economy in Japan; the career limitations on Japanese women and how they shaped the “atelier system,” are all issues that beg for more discussion.

However, Fraser’s account of department store galleries is very good. He is right about the different nature of critical” artworks, which are far more reflective and less aggressive in Japan than in the West. His observation that the brooch, not worn directly on the body, has been the easiest Western ornament for the Japanese to adopt, is quite sensitive (although he doesn’t acknowledge the prohibition against altering the body that has made pierced ears slow to catch on). He quite rightly notes the enormous material diversity of Japanese culture and its unusual “aesthetic of the temporary” (some things, such as cherry blossoms, are more valued because they are so short lived). The continuity of certain approaches as folding (e.g., origami) is also accurately appraised. But the Mingei aesthetic is not as well pinned down, and in one example is linked to the use of cardboard, which is a questionable analogy.

Hida’s essay, naturally, is written much more confidently. What’s extraordinary about this essay, though, is that Hida has adopted a Western style of criticism so adeptly that his comments on exhibitions, themes, etc., are often far harsher than we American craft writers allow. This, in the land of indirection and social propriety! He writes of a handful of artists with deep engagement, looking at their forms and techniques and materials within the context of modern

social, material, and even political culture, and contemporary psychology as well. It’s an amazing performance. Hida also tells a tale of an exhibition set up by foreigners on a theme they based on a misunderstanding of Japanese youth culture. He describes how one jeweler made a successful response to the theme and explains what only someone deeply familiar with Japan would understand. It has to do with social classes, conformity and schoolgirl prostitution, among other things, and it’s probably worth buying this catalogue just to read this story! Hida’s point is that Japanese are often very good at fulfilling foreigners’ expectations, whatever they might be. Hida’s objectivity and sense of measure are remarkable. His account provokes both thoughts of some Japanese curators who’ve made a career out of meeting foreigners’ expectations (whether or not it Serves the artists) and the suspicion that Hida might worry about Fraser going wrong, as well.

Hida goes on to talk about Shifts in culture and fashion, and laments that innovation has inexplicably faded in the jewelry field. He explains the concepts of do (“way” used for such aesthetic practices as tea ceremony and such non artistic activities as wrestling) and kata (“form” the perfection of posture, technique, and movement in these “ways”). Hida argues they can be regarded as bodies of aesthetics that have been distilled out of the Japanese collective unconscious. He guesses that as “artistic” innovation faded, jewelry design was turning into a “way,” and the result has been that artists have adapted traditions in a new manner leading to his surprise to a new blossoming in jewelry. What a delightful contrast to the many contemporary American art critics who are so utterly certain of their own omniscience that they would never admit to surprise!

A section of the catalogue seeks patterns of material use and finds novelty in lacquer (including a traditional armorer’s technique), and a great deal of work in paper, but less work in bamboo or plastic than might be expected. Textiles are used for some jewelry and SO is leather (no mention is made of leather’s ambiguous status when Buddhism was more dominant, or that felt is a relatively new material since wool was not available in Japan until modern times). In the illustrated biographies, among the Most striking or provocative works are Teruo Akatsu’s dustball on wire necklaces, Shinichiro Kobayashi’s camphorwood jewelry with a fragrance, Tomomi Matsunaga’s softly curving bamboo bracelets, Noriko Nagano’s undulant necklaces of clear urethane rubber, Aya Nakayama’s corpulent objects coated in beautifully mottled lacquer, Kana Takenaka’s neckpieces of irregular tubes covered with newspaper, and Sae Yoshizawa’s bracelets and rings made of pleated photographs.

All in all. the book is a treasure of previously unavailable information. One only wishes for more.