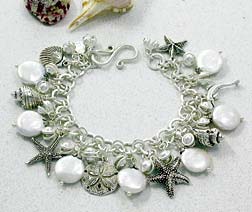 “I can do a whole necklace of nice-quality pearls and then add a silver piece to it, and it may well cost me less than it would cost me to use a whole strand of gemstone [beads],” says Diana Contine of Dakota Moon in New Hope, Pennsylvania. “If I wanted to do the same thing with a really nice quality of cut amethyst, it might cost three times as much. So I tend to use those stones more as accent pieces with the pearls.”

“I’ve used pearls since [I began making jewelry],” says Lee Archer of Lady of the Lake in Lake Charles, Louisiana. “I have a set of designs right now that I definitely would not have been able to make if I had not found the sources that I have for reasonably-priced, very nice-quality Chinese freshwaters. I don’t think I could afford to use saltwater pearls. It’s so difficult to find a 10-mm saltwater pearl, and even if you could, it would just be so horribly expensive.”

Low-priced Chinese freshwater pearls provided an introduction to pearls for many artists who had previously only worked in beads, says Eve Alfille of Eve J. Alfille Gallery & Studio in Evanston, Illinois. She founded the Pearl Society in Chicago to educate jewelry artists and retailers about pearls. “The very inexpensive pearls were very convenient as an entry level [artist]. You could actually buy pearls for as low as 50 cents a strand at one time,” she says. “And for those who work in beads, those pearls were very worthwhile, especially when they started to dye inexpensive pearls every color. But to [those artists], it wasn’t about [the pearls themselves], it was about color, shape, and luster.”

Indeed, the popularity of Chinese freshwater pearls is about more than just affordable prices. “I like the fact that there are all these shapes and colors. I can play with that like it’s candy,” says Contine. “If I just had to deal with white, my designs would still [incorporate them], but I would find other means of adding color.”

“I’m a custom jeweler who’s been working with cultured pearls “ Chinese and Japanese “ for 30 years, but have really been excited the last few years by the explosion in choices the Chinese producers have been providing us,” says Cindy Crouse of Refined Designs Original Fine Jewelry in Voorheesville, New York. “I’ve been so excited by the variety of colors and shapes available now that I’ve started a new line with multiple strands of freshwater pearls, all one of a kind.”

“I really am using a lot more pearls, mainly because of the new irradiated colors that have become available,” says Ann Krupp of Saugerties, New York. “The colors are not so formal: The grays and greens and browns, people can really wear with dungarees or suits. They don’t have to be so incredibly dressy.

“Instead of a gold chain with a brown stone, I can use pearls, because all the browns and greens and grays have their complements in pearls,” she continues. “Now I do choose stones “ not always, but often “ with the idea that there will be pearls that will look good with [them].”

As craft artists begin to work with these new possibilities in color and texture, they often find their designs changing to suit their inspiration.

“My gem dealer phoned me early last year to tell me that I just had to see these new pearls they had gotten in,” says Christine Pyman in Adelaide, South Australia. “These new Chinese pearls are so lovely and exciting that I have started making all sorts of new designs with them. I have always loved pearls, but had not used them in my work because they were a bit boring.”

Pyman’s new pearl designs are a dramatic departure from her previous work. Where her earlier designs were mostly pictorial, depicting women in moments of joy, her new pearl designs are sparse and elegant. “The aim was to give a contemporary look to what is usually seen as a traditional jewel, and to show off the beauty of the new pearls,” she explains.

Donna Wilson’s designs have moved in the opposite direction. “My designs were simpler before I started using pearls,” says Wilson, a jewelry artist based outside of Washington, D.C. “[I do a] transformation series, [and the pearls] started me thinking about what unusual kinds of materials I could use for headdresses. I use pearls, carved semiprecious stones, fossils, beads, and ammonites. So the pearls opened new channels of creativity.”

“We started using freshwater pearls, taking advantage of the unusual shapes and colors, in the late 1980s,” says Richard Wise of R.W. Wise Goldsmiths in Lenox, Massachusetts. He notes that the pearl is often the starting point for the design. “If you’re starting with a big stick pearl, of course it influences the design. The textures, colors, and surface shapes have a great deal of influence, and the pearls are also the central element, so you’re designing around them.”

Other artists have been inspired by the traditional look of the newest white, off-round Chinese freshwater pearls. “What has inspired me about the Chinese freshwater pearl market is the round and off-round pearls in natural colors that I’ve found lately, at prices I can afford,” says Leah Hitchcock of Michon in Kensington, California, noting that she had previously used Swarovski faux pearls extensively in her designs. “While round is certainly not a ‘new’ shape for pearls, it seems like freshwater pearls used to be mostly rice-shaped, and when I found round or potato shapes, they tended to look cheap and have a low luster.”

That improving quality has been just as key as color in encouraging craft artists to incorporate Chinese freshwater pearls into their work. Many designers use the inexpensive pearls as a starting point and then gradually move upstream in quality and price points.

“In the beginning, I’d buy inexpensive pearls, but now I buy more expensive ones. My price range has increased because I want to get better quality ones now,” says Contine. Though it’s made her work more expensive, that has only increased her options. “I think it’s so competitive in the market now; when you go to a gem show or to New York to buy pearls, you can see everyone competing with one another. And there is such a variety. Before you got [less than] the best quality, or [you spent up] to the prices of the Tahitians. It was hard to find anything in between. Now there’s a lot of variety.”

The volume of pearls being produced means that there are more good-quality pearls being sold at lower prices. Archer notes that she now routinely uses better-quality pearls than she might have in the past. “I have pearls in stock that I can’t bring myself to use, even though they were more expensive than the ones I can get now,” she says. “I just don’t want to use them in my designs because I can get so much better.”

Craft artists and Chinese freshwater pearls are perfectly matched in more ways than one. The landscape of Chinese freshwater pearls has been an ever-shifting one, where the specific colors, shapes, and sizes that are readily available change year to year and sometimes month to month. “The place that I buy pearls from has hundreds of thousands of strands, but it seems what I choose one month, I can go back two months later thinking there will be a thousand of them and there aren’t any,” observes Krupp. “I have had to change my designs because the pearls just weren’t there.”While such shifts might be difficult for a mass manufacturer to accommodate, craft artists can take changes in availability in stride. “I just keep switching and changing [what pearls I use],” says Krupp. “I can [almost always] find something that will work. There are a few pieces on my bench [where] I have found nothing acceptable, but they can sit there until I find something.”

The nearly endless variety also fits in well with the craft artists’ typical focus on unique pieces designed to appeal to consumers who are looking for something out of the ordinary. Certainly, artists say their experiments with a wide variety of pearls are finding ready acceptance with consumers.

“Pearls used to be the kind of thing only debutantes or elderly ladies wore,” says Contine. “I think that’s changed dramatically over the last five or six years. You’re seeing more fashion pearls. People can look at [a piece] and say, ‘I can get this and it will match this outfit, this will match my jeans.’ It’s not just the regular choker strand of pearls.”

Nor do these artists consider pearls a mere blip on the fashion radar. “I hope to be working with pearls as much as I [can]. I think they’re going to stick around,” says Contine. “Women have always loved pearls. They’ve just become more affordable now.”

Such enthusiasm is typical. Ask craft artists why they use pearls in their designs, and the most common response is, “I just love them.”

“The primary passion of my work is pearls of all types,” says designer Susan Ronan of Coronado, California. “However, in recent years freshwater pearls have improved so much in quality, while still remaining affordable, that one can only continue to be amazed by what is available in the marketplace.

By Suzanne Wade May 2004
In association with