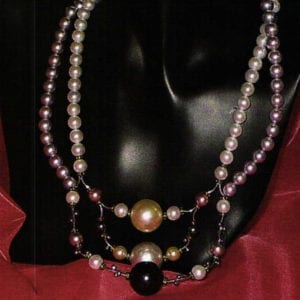 Golden, white, and rose-colored pearls of dubious quality dangle from her outstretched arms. At least 20 more strands are draped around her neck. They can be purchased for about $3 a strand.

At the other end of the pearl spectrum is Haiyu Pearl Co. Ltd. Located down a dirt street on the eastern coast of Sanya with a stunning sea view, Haiyu pearl is one of Haiman’s many pearl factories and retailers. In addition to the freshwater pearls that have become China’s trademark, they feature the saltwater pearls that put Hainan Island on the pearl world’s map. 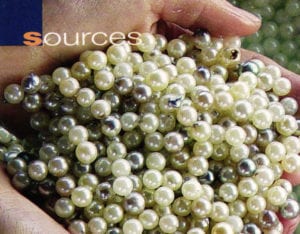 From the humble to the elegant, pearls define Hainan’s culture.

“In Chinese, we use two characters for pearl,” says Wei Quan Liu, general manager of Haiyu Pearl. “The first one is for the pearl. The second one means ‘treasure.’ Since the first character represents the main meaning, in China we say that pearls are more valuable than treasure.”

Pearls from Haiyu Pearl, like those from other pearl factories in the region, are exported to countries around the world, including Japan, Korea, Taiwan, the European Union, and the United States. 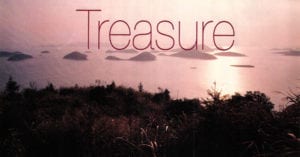 A lush, tropical spot at Yalong Bay, typical of that on Hainan island. Photo © PanoramaStock/Robert Harding.

China’s saltwater pearl industry is really a triangle of three provinces: Guangdong, Guanxi, and Hainan. Guangdong is the leader in saltwater pearl production, generating about 12 tons of pearls per year, with Guanxi a close second, producing approximately eight to 10 tons. Hainan trails behind, yielding less than a ton of pearls each year. In fact, many of the pearls sold in Hainan’s pearl shops probably come from Guangdong or Guanxi provinces.

Yet pearl culture permeates Hainan’s lifestyle, much more so than in the other two pearl provinces. Maybe it’s the tropical climate and the sapphire-hued South China Sea, with its miles of white sand beaches. Or it could be the coconut palms and vibrant hibiscus that line the wide boulevards and give the island a casual, laid-back feel. Pearls seem to be a natural extension of Hainan’s character. While pearl sales alone are not a large part of Hainan’s overall economy, they are inextricably linked to tourism, which is the number-one industry on the island. 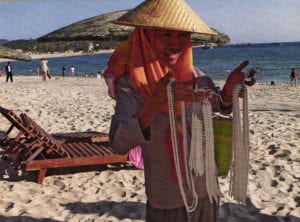 A woman on the beach in the town of Sanya sells local pearls to tourists. Photo by Leslie Clary.

What Hainan lacks in production quantity, it is seeking to make up in quality. With an annual average air temperature of 82.4 F and water temperature averaging 77 F, Hainan has become a prime research area for tropical marine life, including saltwater pearl oysters.

At the forefront of this research today is Professor Aimin Wang of Ocean College at Hainan University. This year, Professor Wang and his team received a five-year grant from the Chinese government to support their research on Hainan’s pearl oysters. Their goal is to produce larger, faster-growing oysters that are more disease-resistant and produce higher-quality pearls. 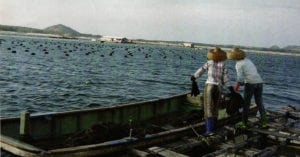 “In China, we produce many pearls, but they are often of poor quality,” Wang says. He attributes this to two major factors: genetic stock and environment — too many oysters in too small an area. As a result, the oysters are small and weak, producing inferior pearls.

“We have three main objectives,” he continues. “The first thing we are trying to do is to find ways to improve the oysters’ genetics by selective crossbreeding and hybridization. The second thing I do is to try to encourage the farmers to cultivate on a smaller scale. To breed for quality, not quantity.”

This second item has been met with some resistance from local pearl farmers. A number of small pearl farms are scattered along Hainan’s coastline. The vast majority of these are operated by local people who equate more oysters with higher profits. Yet the effects of overpopulation are proving detrimental to quality, size, and output. As the positive results of Wang’s experimentation become obvious, more of these farmers are receptive to modern oyster-farming techniques. 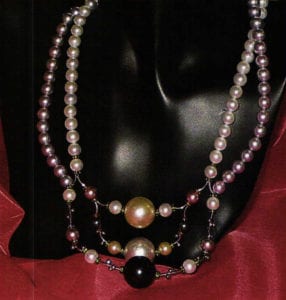 Hainan’s shops offer a variety of pearls and pearl jewelry for sale, some imported from other parts of the world; photo by Leslie Clary.

The third objective for Wang and his research team is experimentation with new methods of disease and parasite control, especially for polychaetes, a type of worm that bores into the oyster shell. Cement painting of the outer shell has proven the most effective method of prevention so far.

Most of Hainan’s pearl farms grow akoyas and, to a lesser degree, South Sea pearls. One farm has attempted to produce black pearls, but with limited success.

“Hainan is an ideal place for research,” says Wang. “It is a typical tropical marine area, and the oysters here grow faster than in Guangdong and Guanxi.” This is significant when waiting for the results of hybridization experiments. Difficulties arise in producing large quantities of pearls, however. Annual typhoons during the summer months can wreak havoc on unprotected pearl beds. Last September, a typhoon swept through the island, and while it didn’t directly damage the farms, the disruption of the environment and water temperature by the monsoon tides made the oysters more vulnerable to disease. 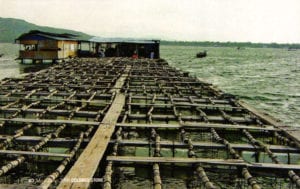 In 2003, Wang and his students began working on a project to cross-breed oysters from different geographical locations. They took akoyas from India, which are fast-growing with a pink nacre, and crossed them with the wild population in Hainan, which grows more slowly with a yellow nacre. The first-generation hybrid showed a nearly 50 percent increase in size, a promising increase in color, and higher-quality nacre. Some of the farmers in Guangdong and Guangxi have already asked Wang to supply the new hybrid.

Although jewelry is the most visible form of Hainan’s pearl culture, cosmetics and medicine also play an important role. Jingrun Pearl Co. Ltd., Hainan’s largest pearl factory, was the first in the area to begin mass marketing medicine and cosmetics using pearl powder.

Wang Hai of Jingrun Pearl estimates that 50 percent of their sales are non-jewelry products. Nearly all of Jingrun’s cosmetic and medicinal sales are within China; only about 10 percent leave the country, and those are mostly to Hong Kong and Taiwan.

Jingrun Pearl’s goal for the future is to develop new markets, especially in the health food area. They are currently running a major advertising campaign advocating the health benefits of pearl products. According to Wang Hai, “Our goal is to promote pearl culture and let it spread to the world.” 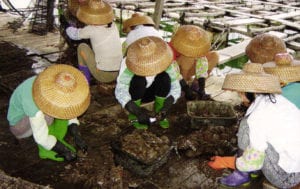 The curative power of powdered pearl has a long history in China. Li Shi Zhen, one of China’s great physicians and herbalists from the Ming Dynasty, compiled a 52-volume dictionary of herbs and herbal remedies, Ben Cao Gang Mu, which has been translated into over 60 languages. This work is still considered one of the cornerstones for traditional Chinese medicine. In it, he discusses pearl powder as a treatment for a number of ailments including insomnia, indigestion, and heart and liver problems. Today, pearl powder is a commonly-used remedy for colicky babies.

China has had a long-standing romance with pearls. Over 4,000 years ago, they were given as precious gifts to royalty, although there are no records of the Chinese themselves diving for pearls until the Song Dynasty, 960-1127 A.D.

The acceleration of China’s cultured pearl industry springs from former Chinese leader Deng Xiao Peng’s economic reforms in 1978. China’s coastal areas have benefited most from these reforms, reflected in the rapid advancements made in the pearl industry. In 1988, Hainan was established as China’s largest special economic zone. The pearl, which is so wrapped up with China’s history and mythology, is an apt symbol for this region’s emergence as a major player in the world’s pearl economy.

The author would like to thank the following people for help with translating and”/or introductions: Susan Zhang, Quan Jian Gang, and Han Bin.