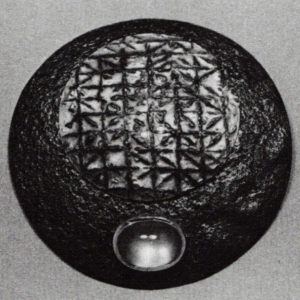 A goldsmith, not only a jeweler, Charles Lewton-Brain exhibits the competence and traditional skills accumulated through studies at the Nova Scotia College of Art and Design and his experience working with goldsmiths Karl Angermeir and Richard Bossert in West Germany.

One must look closely at Lewton-Brain’s work or risk missing hidden mysteries, intents and gestures. Such depth can be seen in a ring commissioned by a local potter. In essence it deals with the elements of earth and water. Entwined into the narrative are a ruby and an emerald, while a diamond rests concealed on the interior surface of the ring, a precious secret known only to the wearer. Attention to detail goes beyond or, more accurately, behind the actual design. Lewton-Brain considers the backs of his pieces of equal concern and has fitted many with painstakingly handmade clasps. The deeper one examines this work, the more one discovers the visual code of its creation. From the delicate scoring to the colorful firing, these discoveries enhance the magic of the goldsmith’s craft.

A chronological viewing of the work reveals a parallel development of technique and ideology. A questioning of materials is evident in the juxtaposition of the precious, the weathered and the industrial. Pins combining such diverse elements as sterling silver, aluminum, 24k gold and rusted steel investigate the socio-economic values along with the intrinsic physical qualities of the metals. 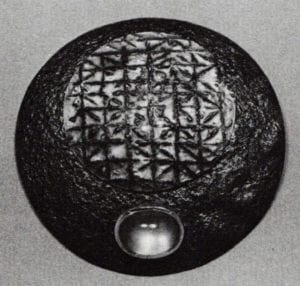 The nature versus technology struggle over the mastery of elements was a concern developed during Lewton-Brain’s summer on Baffin Island working as manager at Frobisher Jewellery. Time, weather and chance are all components of this work. In introducing the exhibition Chris Tyler, Executive-Director, Nova Scotia Designer Craftsmen, comments: “Charles became aware of industrial debris-metal left abandoned, worthless yet patinated by the natural forces of wind and weather. Some of his most powerful pieces contrast civilization’s richest materials with metal so unregarded it was thrown away until redeemed by the goldsmith.”

The most moving examples of Lewton-Brain’s philosophical intent are seen in three works. The first is a pin of sterling silver and 24k doublée (rolled gold), scored and fired to resemble a fissured, rocklike object. Imposed upon it is an aluminum triangle, severe and exact, its dominance enforced with brass bolts at each corner. The two other pieces, more sculptural and cryptic, are in direct reference to Inuit culture and its manipulation by technology. In both pieces Inuit culture is represented alternately stretched and punctured, dried skins of gold over technology’s metal structures. Each element rests precariously, unsoldered on the other, emphasizing the sense of delicate balance. 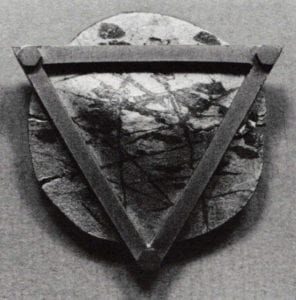 A traditional goldsmith, Lewton-Brain is confronted by the challenge of creating decorative objects for personal adornment while striving towards the domain of personal statement. This exhibition revealed work ranging from traditional jewelry to conceptual sculpture. These two polarities, straining towards one another, creates tension in Lewton-Brain’s work and promises that each time we look, what we see is more than jewelry.