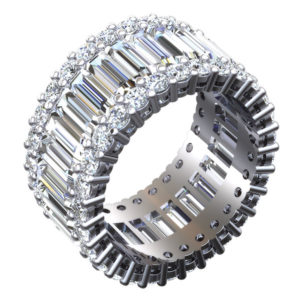 Making jewelry is the perfect confluence of art and science. It’s where aesthetic and inspiration meet application and practicality. Computer-aided design (CAD) software is one of the tools that helps brings these two sides of the equation together. But although CAD’s precision and ease of use can expedite the design process and allow jewelers to create gorgeous, complex pieces that would take countless hours to realize by hand, it’s not a flawless system.

In fact, one downside of CAD is that using it can result in design problems that prevent a piece from effectively coming off the screen and into the real world. The good news is, it can also be used to fix those same problems.

John Dickinson, owner of Dickinson by Design in Houston, was approached by a client with a request for a custom-made ring. In fact, she had been referred to Dickinson by another company be-cause she was exceptionally specific about her desires. “They felt that I might rise to the challenge of working with a client who is as passionately concerned about the tiniest of details as they are charming and delightful to be with,” Dickinson says. “I felt obliged to see where it might go.”

The client arrived with images of what she wanted, along with spreadsheets and layouts comparing baguette diamonds of differing dimensions. She had paper mockups of the ring, to see how it might look on her finger. Precision and perfection were very much in demand. Later, Dickinson would discover that the customer was also inclined to examine the piece at every stage using a loupe and a gem scope. “She made it very clear going in that there was absolutely no margin for error and she reminded me of this throughout the process,” he says.

Clearly, this was no ordinary commission.

The job in question was a platinum eternity band featuring 32 baguette-cut diamonds encircled by two rings of round brilliant diamonds—a total of 58 2 mm stones. (Dickinson notes that the stone setting alone required 20 hours of work.) Between the need for exacting detail and the repetitive nature of the many stone settings in play, it was a design that could only sensibly be created using CAD.

Peter Langley, the company’s director of design, spent many hours creating the design using Matrix CAD software. He was in almost constant contact with the customer as well over the course of four months. While waiting for her platinum version, the customer paid for a version in white gold with synthetic stones—to test out how it looked. That piece cast well, with a near-perfect finish. It appeared that all was going well.

Then it came time to cast it in platinum. “The results were good but not amazing,” Dickinson says. “And we needed amazing.”

In addition, the piece was several months in the making and the client was getting anxious for her ring. Dickinson decided to outsource the casting to TechForm Advanced Casting Technology LLC in Portland, Oregon.

When Teresa Fryé at TechForm received Dickinson’s CAD files, she could see right away why they had gone the computer design route. The wireframe clearly showed that it was bold, beautifully dramatic, and labor intensive. It also showed flaws that guaranteed it wasn’t going to survive being cast in platinum. Just getting it invested properly would be tricky. 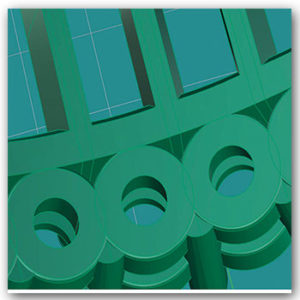 “This happens fairly commonly,” she says. “Jewelers design pieces that can’t be invested. It’s one of those things where the aesthetic is leading the idea but the manufacturability isn’t there.”

One issue with Dickinson’s ring was the triangular spaces between each of the round stones where the settings connect to the shank. Although the idea may have been to allow more light between the stones, any deep triangular feature is an immediate red flag to an experienced caster. “Sharp angles are bad,” Fryé says. “They’re difficult to cast well because the investment tapers to a knife-edge that is inherently weak. This feature is at risk to fail both when the wax expands during burnout as well as when the molten metal enters the flask.” In the case of this ring, she notes, the triangular features also impeded the ability to create a good flow of metal between the stone settings and the rest of the ring. The connections would “neck down” and impede a healthy solidification of the casting.

“If the investment doesn’t get into every opening in this ring and really bond and become strong, what happens—and this is accentuated in platinum casting—is that when the metal is coming in at around 60 mph in the centrifuge, it hurls in there and breaks any weak structures. Remember, platinum is one of the densest elements on earth. If you want to get a high quality, dense casting, you have to remove any vulnerable features. This ring had them over the full 360 degrees. And they were deep. We knew the investment was going to fail, and when that happens, you get porosity and inclusions. A real train wreck. Gold would probably flow through this design with no problems, but platinum freezes off more quickly.”

As shown in the CAD images, the fix was fairly straightforward. Wherever there was a triangular space, it got filled in. This ring had numerous triangles on both the inside and outside surfaces, making it a very high risk for failure. Eliminating these features created a more accessible surface that ensured the model would invest properly, while simultaneously encouraging better metal flow. Dickinson had also asked, when sending along the design, for advice on adding sprues to the model. TechForm pointed out six spots for adding contacts that would distribute heat and feeding equally around the ring’s inner diameter.

TechForm sent their suggestions back to Dickinson in the form of notations to the STL file. Their policy is not to change the designs themselves, but to make their suggestions and negotiate the final geometry with the client/designer to assure the changes fit for the entire manufacturing process. “The modifications they suggested were extremely effective and the overall design was not affected,” Dickinson says. The files went back to Langley to input the changes, logging another several hours of design. With the clock ticking, the revised file was sent back to TechForm for the actual casting.

Then came the moment of truth. 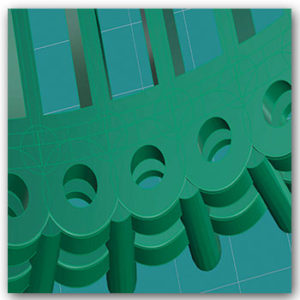 “We cast a further piece ourselves [using the revised model] and compared the two,” Dickinson says. “We really had come down to the wire and had no margin for error or additional time to recast. They were both fine, but our casting would have required more work and time to finish to the standard of [TechForm’s casting]. The final piece passed the customer’s loupe and scope tests, aced her aesthetic evaluation, and actually brought some tears of joy. It is a project that will live on in my mind!”

And if the client ever wants another one, at least Dickinson can be sure that the CAD file is ready to go.

Little torch set up with LPG gas and compressed oxygen

LOVING our Steamshine steamer - anyone else?