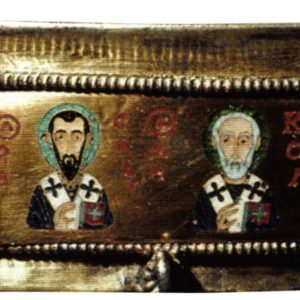 The exhibition, mounted at the Royal Academy in London in collaboration with the Benaki Museum in Athens, incorporates over 240 objects, spanning 1000 years of Byzantine artistic production. The pieces with enamels are thus shown within the context of painted icons, mosaics, ivories, jewelry,  illuminated manuscripts and finely woven textiles, on loan from many international museums, notably from Italy, Russia and the USA.

The detail [from a larger composite piece], shows the typical Byzantine cloisonné treatment of the 10th-11th centuries, for iconic images of the Saints.

For reasons of preservation and feasibility, few pieces of enamelwork can be loaned: the important composite plaque, from the Treasury of St. Mark’s Cathedral [Venice] is featured on the promotional literature, and attracted special attention in the exhibition. For this, the central figure depicting the Archangel St Michael, has the form in relief-worked gold foil but the head is formed of glass with painted features and hair.

The imposing figure is against delicately worked cloisonne patterning, with blue predominating, to represent the Heavens, and the entrance to Paradise, shown with gold vaulting and enamels to emulate halls of green marbled with fragments of red and white. It is in the round and oval medallions set into the wide borders around this central assembly, that very precise cloisonne work is used, to represent iconic heads and figures of saints, silhouetted against gold backgrounds.

For other of the pieces in the exhibition there is again this use of a series of small medallions, with diameters often under one inch [2.5 cm], inset as series to give very powerful visual effects. For these portrait styles, recreating in miniature the great mosaics of the period, there were conventions in the faces, so that fine gold cloisons define eyebrows, pupils and locks of hair, and give patterning to the folds of robes to suggest rich fabrics.

While in close up some inequalities show up, due to the technique and firing methods, seen in their true scale and assembled to be part of great works, the Byzantine use of enamels show the contrasts and strength of unfading colors that can still only be obtained with enamels.

A catalogue accompanies this exhibition. For inspiring illustrations of most of the known surviving Byzantine enamels from the different periods, the book by Klaus Wessel remains the most comprehensive source. For the techniques, the original source is to be found in the practical lessons included by Theophilus.

© Glass on Metal Magazine 2009 April
Glass on Metal is the only publication dedicated to enameling and related arts. Technical information, book reviews, how-to articles and insight on contemporary enamelers highlight each issue.
Category:
About the author