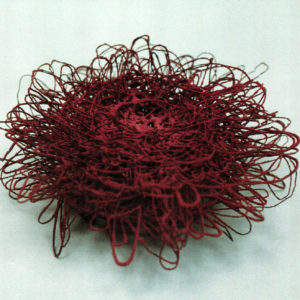 At Rhode Island School of Design’s recent exhibitions of work by graduates of the Munich Academy of Fine Arts, objects by Bettina Dittlmann were noteworthy. While the jewelry of the other artists primarily commented sarcastically or ironically on jewelry, Dittlmann’s more subtle work spoke with the most eloquent voice. 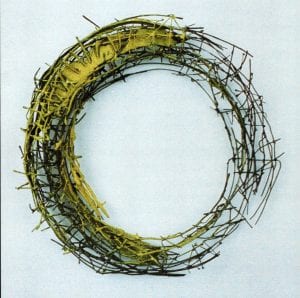 Working with iron binding wire, Dittlmann fabricates fine nest-like constructions. The blackened iron gives the pieces a fragile, pencil line quality. Although structured, the forms show none of the cool engineering of Peter Skubic or Anna Fraling’s jewelry. Dittlmann’s pieces appear to have been built not by a milling machine but by a bird. The hand is as evident as it is in writing or drawing. As the eye moves from shadow to light, the weight and density of the lines vary, maximizing the drawn quality, accentuating the negative spaces and highlighting the wires’ remarkable delicacy. 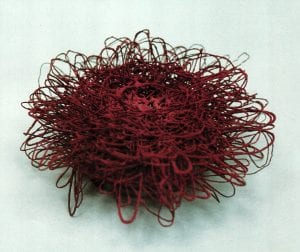 Hermann Junger has frequently endeavored to bring spontaneity of mark and line into sheet metal, a material inherently resistant to such efforts. Dittlmann’s choice of wire, which translates into line more naturally than sheet, extends Junger’s formal inquiries into a less graphic and more three dimensional realm. Dittlmann’s connection to Junger is understandable; she studied with him and with Otto Kunzli. In 1989, she interrupted her studies in Munich to spend eighteen months at SUNY New Paltz where she explored color and developed a sensitivity for enameling. She currently resides in Brooklyn, New York.

The forms and texts of Dittlmann’s objects have also been influenced by the sixteenth century jewelry known as memento mori (literally, “remember, you must die”). On their surfaces these ornately filigreed and bejeweled rings, lockets and brooches bore Latin text such as Non Gloriae Sed Memoriae (Not Glory But Memory) and virginal or angelic figures. But belying the optimistic and life-affirming exteriors were the interiors depicting skeletons, worms and other symbols of death and decay. 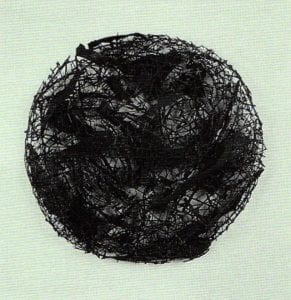 Fascinated by memento mori’s dualistic images and text as well as by the delicate filigree and enameling, Dittlmann transported these qualities to the twentieth century. In her wreath-shaped piece also titled Non Gloriae Sed Memoriae she first connected her use of wire to memento mori’s filigree work. Simultaneously celebratory and funereal, the wreath form also resembles a coil of barbed wire evoking horrors of German history. Dittlmann continues to work frequently in circular formats, but sometimes ventures into other geometric or archetypal forms such as the cross. 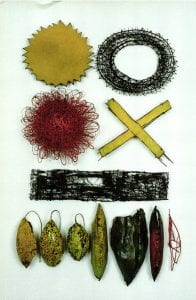 Dittlmann’s pieces often include text but, unlike most “word artists”, her message becomes evident only upon close examination. Words are made part of the idea without becoming the entire idea. The objects are far more than platforms for words.

Most of Dittlmann’s pieces are not intended to be worn. They are comfortable as objects. Yet, through her innovative treatment of material and subtle expression of ideas, Dittlmann has transformed historical jewelry into something contemporary and provocative. Her non-functional objects embrace and distill the essence of jewelry.

Donald Friedlich is a metalsmith living in Cranston, RI.