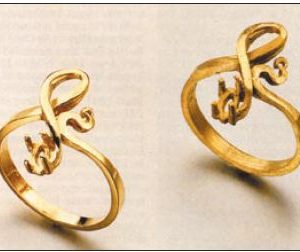 The correct use of modern, semi- automated finishing processes enables the manufacturer not only to reduce production costs, but also to improve the quality of finish on jewellery produced in series. This is the first of several articles, originally published in AURUM in 1982 on this important topic.

The profitability of a jewellery manufacturing plant depends, among other things, on management’s ability to control and reduce production costs. Since a major part of these costs arises from finishing operations such as deburring and cutting, and polishing or burnishing, most jewellery manufacturers in Europe and North America are increasingly taking advantage of the exciting opportunities offered to them by modern, semi-automated bulk finishing processes.

One of the most important of these processes is tumbling, and in this article we shall first take a look at the basic principles of the tumbling process and then show how it is applied in practice to the finishing of gold jewellery.

Often known as barrel polishing or tubbing in the jewellery trade, tumbling is in fact a very ancient process. It was used by the Egyptians in Antiquity, as well as by the Celts who place smooth pebbles and sand from the seashore into hollowed-out logs together with their iron weaponry, and then left this early example of a polishing barrel to roll in the sea for a few days.

In the more recent past, tumbling has been used mainly for burnishing findings and chain, which are difficult to polish by hand, During the past 20 years or so, however, this relatively unsophisticated operation has gradually evolved into a very effective and controllable finishing process which is widely employed today in many industries where mass produced small parts require a high quality finish.

In the jewellery industry, the tumbling process is used specifically for carrying out the following operations on jewellery parts:

In the description of these processes that follows, specialized terms, such as “cut down”, “media”, “parts”, etc., are employed. For the benefit of readers who are unfamiliar with this terminology, a short glossary is included at the end of this article.

Basic Principles of the Tumbling

Tumbling is usually carried out in barrels that have a hexagonal cross- section. The parts to be processed are mixed with steel shot (for burnishing) or with appropriate abrasive ceramic or plastic chips selected from a variety of available shapes (for cutting). The steel shot and abrasive chips are known collectively as media. Various chemicals and abrasive powders mixed with water are also added to the load in the barrel. These materials are generally referred to as compounds.

By rotating the barrel horizontally around its long axis, the parts and the media are caused to rub against each other. The intensity of the resulting cutting or burnishing action on the parts depends mainly on:

Figures 2a-c show how the speed of rotation (barrel speed) determines the way in which parts and media are caused to move in the barrel. For the purpose of illustrating this effect, the barrel in the photographs was half- filled with simulated media and parts (Figure 2a). This represents a filling ratio of 50 percent, which should be the minimum load to be used in practice. In Figure 2b, the barrel is rotating too fast, and its contents are being swept upwards only to fall back against the parts below. At such barrel speeds, the parts are not being cut down or burnished by the media, but are in danger of being severely damaged through colliding with one another. This phenomenon is known as impingement.

As the barrel speed is gradually reduced, the parts and media begin to move in a regular and orderly manner (Figure 2c), and effective cutting or burnishing action can take place. Note that there is a very little relative movement of media against parts within the bulk of the load or in the regions adjacent to the walls of the barrel. However, in and near the top layer of the load, there is a relatively narrow layer in which the components are constantly sliding and rolling downwards under the effect of gravity. It is only within this relatively narrow zone (the slide zone) that the desired cutting or burnishing action occurs (Figure 3).

At this stage, any further reduction in barrel speed has the effect of decreasing the slope of the slide zone and hence the intensity of the action of media against parts. As a result, cycle times will be unnecessarily long. Only certain very special applications require very slow barrel speeds.

Hence, it is very important that the barrel speed should be correctly adjusted. If the speed is too slow, processing is inefficient and lengthy. On the other hand, if the speed is too fast for a given barrel and load, there is very little smooth contact between media and parts. The result is not only inefficient and uneven action, but the parts are likely to be damaged through impingement.

The filling ratio is the volume taken up by the parts and media in relation to the total volume available inside a barrel. The photographs in Figures 4a and 4b, and the diagrams in Figure 5 illustrate the effect of filling ratio on the slide zone. For filling ratios lying between about 25 and 75 percent, the length and slope of the slide zone remain approximately constant. Nevertheless, at a ratio of 75 percent, there is substantially more material in the barrel and consequently longer cycle times would be required. Practical experience has shown that optimum action (working effect) of parts against media is generally obtained when the filling ratio lies between 50 and 60 percent.

The term load ratio is used to indicate the volume of parts in relation to the volume of media. If tumbling is carried out with insufficient media for a given amount of parts, the results will be unsatisfactory and, in addition, delicate items such as thin-walled hollow parts may be damaged through coming into direct contact with one another.

When calculating load ratios, remember that it is not the weights of the materials (media and parts), but the volumes that they occupy respectively in bulk which have to be taken into account.

Water is added to the barrel to a level just above the load. Too much water has the effect of cushioning the cutting or burnishing action in the slide zone, giving a very gentle, but slow action. Lowering the water level speeds up the process, but this tends to reduce the effectiveness of the compounds and give unsatisfactory results.

The purpose of adding compounds is to enhance the cutting or burnishing effect by keeping parts and media clean, to inhibit corrosion and to provide a cushioning film that protects the parts from damage. Compounds are of various types depending on the application involved and the results that are desired. For cut down, a compound is used that contains fine abrasive powders, as well as water softeners and emulsifying agents which keep the surfaces of the parts and media clean by removing fines (finelydivided abrasion products or smut).

Specially developed compound formulations are employed for restoring surface lustre after cut down (coloring) and for burnishing with steel shot. The systematic and carefully controlled use of high quality compounds is essential for obtaining the best possible finish on gold jewellery.

The processing time should, in principle, be kept as short as is necessary to obtain the desired results. Prolonging the time cycle beyond this point may lead progressively to a degradation of the finish. This is particularly so in the case of parts which have relatively sharp edges and corners. Similarly, the use of process parameters that result in excessively long cycle times should be avoided, for the longer the parts are allowed to churn around uselessly in the barrel, the greater the probability that they might be damaged by contact with the walls of the barrel and neighbouring parts.

A variety of media is available for use in tumbling processes, ranging from ceramic and plastic chips in various shapes and sizes for cutting, to steel shot and needles for burnishing. Wooden chips and pegs are normally used only in dry finishing processes which will be discussed in a future article. A selection of available media is shown in Figure 6.

Ceramic chips are seldom used in the wet tumbling process for finishing gold jewellery. Instead, the most universally popular and effective media are 12mm plastic cones (top left hand corner of the photograph in Figure 6). These moulded plastic media are made of polyester resins impregnated with fine abrasive powders and produce a fine, smooth cutting action particularly suited for finishing jewellery in gold and silver alloys.

The conical shape has the advantage that the media move smoothly and evenly over and between the parts. Plastic cones are also relatively long-lasting, for they become smaller and smaller in use without losing their original shape. Thus, by starting out with a batch of 12mm cones, one obtains smaller cones simply by using the original batch for a while. Small cones are useful for processing very small parts, so the media should be regularly passed through sizing screens and stored in batches according to size.

For burnishing, a popular and useful type of steel media consists of a mixture of round balls, pins and balconies (“ball cones”).

Today, most gold jewellery parts are processed in closed six-sided barrels rotating horizontally around their long axis. Open-ended barrels, which rotate around an inclined axis, are gradually falling into disfavour as manufacturers are discovering the many advantages and superior efficiency of the horizontal barrels.

In a horizontal barrel, the parts are in uniform motion over the entire area of the slide zone which extends throughout the length of the barrel. In an inclined barrel, however, cutting action is uneven and the slide zone smaller. Furthermore, when the difference in density between the parts and the media is fairly large – as is the case when metal parts are being processed with plastic media – some segmentation of parts and media tends to occur. This results in uneven and inefficient action.

Horizontal barrels usually have a hexagonal cross-section so that as the barrel rotates, the parts and media are carried upwards as far as possible and a steep slide zone is established. Round barrels have the disadvantage that the load tends to slip on the bottom so that an effective zone is not formed.

Tumbling barrels were mostly made of wood in the past. Today, barrels are generally made in special plastics that are very tough and have high impact strength. They are superior to barrels made from traditional materials because: