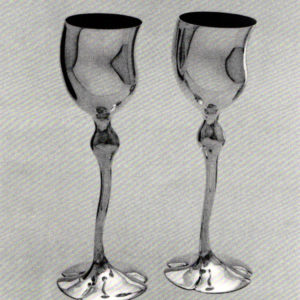 This article is one of a series of articles from Metalsmith Magazine “Art and Technics” talking about techniques in craftsmanship and design.  For this 1987 Spring issue, Tim McCreight talks about finishing up with your work.

There comes a point in every piece of work when we step back and say “It’s done.” This moment, whether it’s in a race, a novel, or an object, we call The Finish. In the making of an object, the word takes on another related meaning referring to the look of the piece at that moment. The issues of whether to polish or not, of which marks to remove and which to leave, the question of patina and highlight, all these are bound up in that word finish.

Everything gets finished, either through resolution or abandonment. There is no topic as universal as finish; it unites every piece, from large to small, production to one-of-a-kind. As an approach to the topic, we’ll examine the two objects show here. Each could be discussed in terms of form, concept, function and so on, but we will limit ourselves to a critique of the finish. 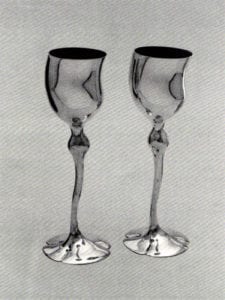 Everything gets finished, either through resolution or abandonment. There is no topic as universal as finish; it unites every piece, from large to small, production to one-of-a-kind. As an approach to the topic, we’ll examine the two objects show here. Each could be discussed in terms of form, concept, function and so on, but we will limit ourselves to a critique of the finish.

Leonard Urso’s panel is a statement about form. It is a sculptural evocation of the female figure, a sympathetic and haunting glimpse at a torso apparently distanced from us by a filmy barrier. In this case surface is successful to the degree it allows the form to dominate. If the finish can enhance the emotional sense of the piece while working in harmony with it, the effect is heightened.

The gently stippled surface was achieved by planishing and then chasing with matting tool after the figure had been realized by hammering the sheet into wood forms and a sand bag. The fine silver surface was created by heating the panel to 1100°F., then quenching it in a Sparex solution. This process was repeated six times. The piece was assembled with threaded rods, then given several coats of Krylon Crystal Clear spray lacquer and a coat of Johnson’s Paste Wax. 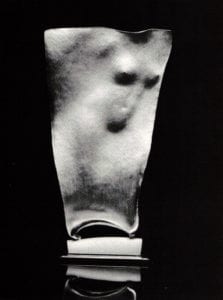 Despite the strength of the form, there is more of a whisper than a shout to this piece. The lyricism of the work demands viewer participation to fully come to life. The recessive quality, primarily resulting from the incomplete figure, is enhanced by the frosted white pickle finish. Just imagine the piece with a highly polished shine; the result would have all the subtlety of a Rolls Royce hood ornament.

Urso has likened his panels to drawings, using the hammer and the sheet as pencil and paper to suggest a figure. The softness of this sculpture testifies to the success of the attempt. The gentle white of the surface is a valuable ingredient in this success.

John Fix’s goblets are also studies of form, although they make no direct figurative reference, have no color expect through reflection and do not involve line. While there is a plantlike quality to the form, it is sufficiently idealized that we can guess that it is not meant to be botanically correct. The important difference between form here and in Urso’s panel is in the role played by the material.

The high polish of silver is a traditional reference for fine holloware. Even though silver tableware is less common now than it was a few decades ago, it continues to strike a chord in most of us. Fix’s goblets are contemporary in their subtlety and symmetry, but they are still linked to a centuries-old tradition of silver vessels.

Similar forms could have been made in ceramic or glass and would function as well as sterling, better in fact, considering the problems of fingerprints and tarnish. But that’s not the point. These goblets are a tribute to the warm shine and traditional value of silver. In this sense, the “sterlingness” of the goblets is vital. The characteristic rouge finish makes the most of these qualities, and so, in my opinion, was a wise choice of finish.

Tim McCreight is a working craftsman and teacher at the Worcester Craft Center. He is a contributing editor to Metalsmith.