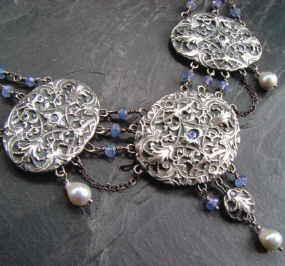 The Art of Self Promotion

Shahasp Valentine’s list of publications reads like a who’s who of the craft publishing world. Her work has appeared in Studio PMC, Lapidary Journal, AJM, Niche, Belle Armoire, and Art Jewelry magazines, as well as several books, including Sherri Haab’s recent release, The Art of Metal Clay. The artist has even appeared on television: Inside City Limits, a cable television show in Shahasp’s hometown of San Francisco , aired a four-minute feature on Shahasp and her work in December 2000.

From her success, you might conclude that Shahasp must have had connections with important people, the kind of celebrity that automatically brings attention and makes good things happen. The reality is much less glamorous. “The truth is you just have to keep trying and trying and trying,” says Shahasp. “[It’s just like] when you want to be an actor, you keep going to auditions. You apply for everything appropriate, and you put it out there. Eventually, you get a nibble, someone hears about you, then you get something else, and someone will call you because they saw that. It’s just networking.”

The Art of Self Promotion

The art of self promotion is less about celebrity than it is about perseverance. Breaking into print doesn’t take a magic touch or fabulous connections in the publishing world. It does take attractive work, some basic materials such as photos and press releases, a dollop of good luck, and a willingness to keep trying until that luck turns up.

The first step in any promotional effort is to put together materials that can provide an initial introduction. For jewelry artists, the most important element is the photos. Although some magazines have the budget and inclination to photo-graph your work, that’s not always the case. And while good photos will get you noticed, so-so photos may decide the editor in the other direction.

If you’re not sure whether your photos are good enough, collect a couple of magazines you admire. Look at the pictures, and put your photos side-by-side. Now be honest with yourself â do they look as good as the images in the magazine?

Remember that it’s not just the work you’re looking at; it’s the photo itself. Consider the lighting, the focus, the back-ground, and the overall composition. If your photos can’t stand up to this scrutiny, consider hiring a professional who specializes in jewelry photography.

Next, you need to write something to go with those photos. It might be a press release about your newest collection, an artist’s statement, or perhaps an entire article. How-to articles are often an especially good way for artists to break into print, since this type of article is always in demand. In addition, magazine editors will usually appreciate that your expertise is in jewelry making rather than writing, and they’ll gladly work with you to edit and refine the article until it’s as polished as a piece from a professional writer.

“I was very insecure about my writing skills [when I first start-ed],” says Linda Bernstein, whose first published work appeared in The Rubber Stamper magazine in 1997. “But [the editor] assured me she would edit it and help me, and all I needed to do was to write it. That was the first article I ever had published.â

Bernstein’s success prompted her to write another article, and that led to an invitation by another editor. “I was asked to write a groundbreaking article about polymer clay for American Artist,â she says.â After that, I just took the ball and ran with it. I’d approach anybody, anywhere, any-time to offer to write things for them.â Today, her credits include articles in a wide variety of publications, including Studio PMC, The Rubber Stamper, Jewelry Crafts, Bead & Button, and Lapidary Journal.

If you have an idea for an article, but aren’t sure how to submit it to a magazine for consideration, request a copy of the publication’s writer’s guidelines. (Many magazines, including Studio PMC, make these available on their Web sites.)Writer’s guidelines contain a wealth of information, ranging from how long an article should be and how to submit it for consideration, to who the publication’s audience is and whether your tone should be formal or casual.

Finally, before you send off your publicity materials to an editor, it’s always helpful to have a second set of eyes look them over. Ask a friend whose taste you admire, and who you can trust to give you an honest opinion, to look at your pack-age. A second opinion will point out the-so-so photos, the confusing wording, the missing step in the how-to, and other problems. When you’ve worked on a project for many hours, it’s easy to overlook mistakes, including errors that are obvious to anyone else. A fresh perspective can help you produce a more impressive final product.

Once you have publicity materials, it’s time to get out into the world. For some artists, the biggest barrier to promoting their work is not indifferent editors or fierce competition â it’s their own shyness. But if you never send your photos to a magazine, or introduce yourself at a conference, no one will ever know what you have to offer. It’s up to you to step forward.

Many artists begin their journey toward name recognition with a simple introduction. For Trish Tinsley, it was a chance meeting with Jewelry Craft contributing editor Esther Anderson at a certification class in California . “We just hit it off,” Trish recalls. “I believe I had some of my beach glass jewelry with me, and she saw some of the pieces I was making in class. Shortly afterwards she said she’d like to interview me and write an article.” A couple years later, Trish met freelance writer Diana Lambdin Meyer at the first PMC Conference, which led to an article in Glass Art magazine.

One introduction often leads to another, as well. Shahasp remembers that her very first published piece of work was in Studio PMC in 1998. That photo brought her work to the attention of Studio PMC technical editor Tim McCreight, who suggested Shahasp as a possible contact for an article in Manufacturing Jewelers and Suppliers of America’s monthly magazine, AJM. That article put Shahasp’s work on the cover of AJM.

Listen for the Call

Open calls for entries and submissions can be the ideal opening to get your publicity materials into the right hands. “I never would have heard about the 1000 Rings book from Lark books if it weren’t for the call for entries,â says Shahasp.

Association membership is a great way to hear about these opportunities, since many association newsletters and magazines print calls for entries of interest to their members. (Studio PMC prints PMC-related calls in the “Happenings” page.)Another good source for such information is online bulletin boards and forums, such as those hosted by the PMC Guild, Women’s Jewelry Association, and the Society of North American Goldsmiths, or independent jewelers’ boards such as the Orchid forum hosted by Ganoksin.com.

Ganoksin is sponsored by
Orchid forum hosted by Ganoksin.com.

A similar opportunity is an invitation to participate in the publicity efforts of craft and trade shows. “If you do wholesale and retail shows, when you’re accepted there’s often a little blurb that says ‘this agency is doing our PR, send them your stuff,'” says Shahasp. “Most people don’t, but I always do. And I’ve ended up [with photos] published in ads and newspapers several times because I sent the PR people something to use.”

The old saying is true: If at first you don’t succeed, try, try, again. If you don’t start getting calls from editors after your first press kit or article proposal, write another. If your first photos don’t elicit the calls you want, take some others. And again, and again. “If you’re going to achieve your goal, you must keep trying,â says Linda. “It may not happen overnight. To get where I am, it took me a solid 10 years.”

Once the ball starts rolling, you’ll probably find the effort becomes easier: Editors may even start calling you. But publicity is an ongoing effort, and you’ll never be completely finished. “Any time I’ve got some press-worthy announcement, I send it to all the newsletter editors,” says Shahasp.” When I create new work, I have it photographed and send [images to editors] just so [they] have it on hand.”

Inevitably, not all your work will fit the needs of the publication, and it’s important to keep negative responses in perspective. “Keep a sense of humor, and if that particular door doesn’t open, don’t take it as a personal rejection,” advises Trish.

If your best and most persistent efforts are getting you nowhere, step back and consider why. Re-examine the quality of your materials, consider how your work compares to other work you’ve seen in the same magazines, and think about whether the publications you’ve been targeting are the best match for your work

You might also consider contacting an editor and respectfully asking why your materials haven’t elicited the desired response. It may have been bad timing, or excessive competition. But even if the criticism is something you don’t want to hear, such as that the editor didn’t consider your work sophisticated enough, try not to take the rejection personally. It might be that another piece of your work would have made the cut, or that your original piece would be appreciated by a different editor. Either way, the answer is to try something new â a new publication, a different piece, or both.

Whether your dream of publicity means having your work published in the local guild newsletter, or a spread in a New York fashion magazine, the most important step you take is the first one. “I think the basic crux of the whole thing is that you have to just do it, and not be afraid of rejection,” says Linda Bernstein. “The worst thing they’re going to say is ‘we don’t want this, we don’t need this.'”

As one inspirational poster puts it, Babe Ruth may have hit 714 home runs, but he also struck out 1,330 times. So step on up to the plate, and see what kind of celebrity you can achieve!

By Suzanne Wade [Studio PMC – 2003]
In association with
Studio PMC
Category:
About the author