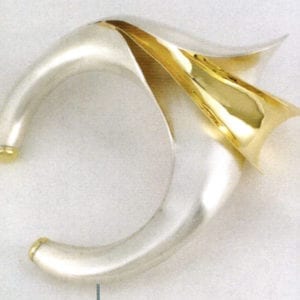 Transforming a flat piece of metal into a flowing form, free from constraints, wild, dynamic and strong. This is the alchemy of forming. The characteristics of the metal are transformed. The strength these are given through the forming process makes it possible to have a thin metal thickness, especially with gold alloys. The process also makes it possible to create items of jewelry which are free from solder joints, added clasps and earring studs. The entire piece of jewelry can be made from one piece of metal. Thin metals have a high level of resilience, meaning that relatively large and yet very light items can be created. 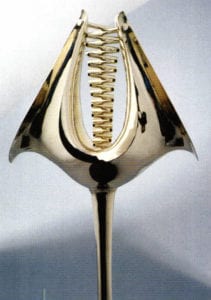 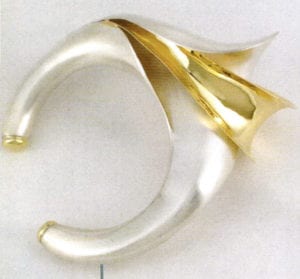 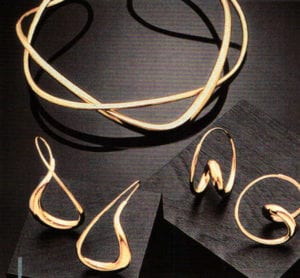 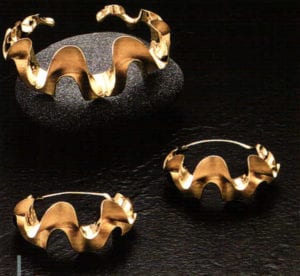 Shell structures consist of both anticlastic and synclastic forms which can emerge or exist on their own. However more complex forms can be created by a symbiosis of anticlastic and synclastic forms. The synclastic sinking of sheet metal stretches its center and compresses the edges. The resulting form is a container form. Anticlastic raising compresses the center of the metal and stretches the edges. The resulting form is reminiscent of a saddle or negative curvature. Anticlastic surfaces are also characterized as opposingly curved surfaces They are very stable and are therefore used by architects for roof constructions. This stability is reflected in the pre-celtic torque-bracelets and -necklaces discovered in excavations in Ireland and Scotland and dating back to the Late Bronze Age or Early Iron Age. Brian Clarke adapted a possible manufacture process using stag antlers. He teaches this and other techniques at his School of Metalsmithing in Ireland.

The creation of a groundbreaking tool

Every silversmith changes his tools according to his needs but few actually develop or invent technology themselves. Finnish silversmith Heikki Seppä has, however, managed this. “It came from the frustration of the sameness in the trade,” says Heikki Seppä of his searching for new techniques. “The sinusoidal stake results from a demonstration I did about how to taper a rod during a blacksmithing presentation. It was coincidence,” says Seppä. Then he started to experiment with silversmithing techniques on this sinusoidal stake and he also found out that the material nylon for hammers and stakes made a great contribution to the possibilities in silversmithing, due to its resilience and strength. This was in the 1970s. <div class="adframe"> <div class="adframe300x250"> <div class="adframe300x250label"> <i class="fa fa-gem icon"></i> Ganoksin is sponsored by</div> <center> <div id='div-gpt-ad-1479837244275-0' class="ad-item" style='height:250px;'> <script> googletag.cmd.push(function () { googletag.defineSlot('/87578358/ganoksin-paragraph-1', [ 300, 250 ], 'div-gpt-ad-1479837244275-0').setTargeting("topicid", ['jewelry-design', 'jewelry-making']).addService(googletag.pubads()); googletag.pubads().setCentering(true); googletag.pubads().enableSingleRequest(); googletag.enableServices(); googletag.display('div-gpt-ad-1479837244275-0'); }); </script> </div> </center> </div> </div>

Seppä comes from Finland. After completing his training, he worked with Georg Jensen, a silversmith in Copenhagen, Denmark, amongst others. He says that this time gave him a new perspective on creativity and product development. Seppä joined the Cranbrook Academy of Art located in Bloomfield Hills, outside of Detroit, Michigan. Following Cranbrook, he joined the Louisville Art Center in Kentucky for five years. The anticlastic and synclastic realization happened at Washington University in St. Louis, Missouri where he taught from 1965 until his retirement in 1992. Seppä has also held numerous workshops. He has been showered with prestigious awards such as the Hans Christensen Sterling Silversmith’s Award and National Metalsmith Hall of Fame Award. His work is displayed in museums such as the Renwick Gallery of the Smithsonian Museums in Washington D.C. and in many private collections. Seppä lives with his wife Laurie A. Lyall on Bainbridge Island in Washington State, USA. Lyall completed her training as a goldsmith in Germany and shares Heikki Seppä’s passion for metalsmithing. Over time, Seppä has moved away from this role of creating functional objects and begun to create art objects. He says of his decision to deal solely with form: “l hope that silver will find it’s rightful and lasting place in the art field as a medium for self-expression.” Heikki Seppä is involved in many things. Amongst other things, he was co-founder of the Society of North American Goldsmiths. 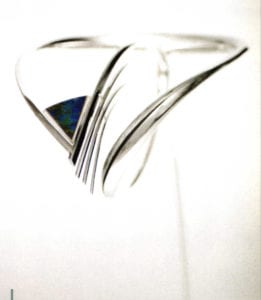 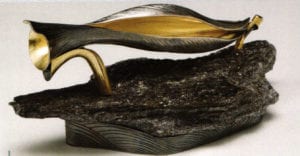 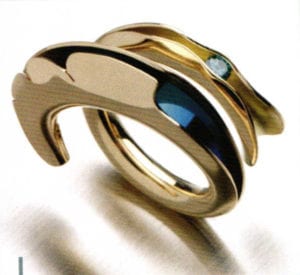 In 1978 Michael Good joined Heikki Seppä in the development of modern anticlastic forming when Good took a workshop with Seppä. Seppä introduced Good to a variety of raising techniques and shell structures. Together they coined the term “anticlastic raising” and Good went on to develop what is now known as the “open seam spiculum”. They developed different forms of stakes of iron, wood and nylon as well as the hammers to go with them. Both Heikki Seppä and Michael Good decided to pass on their knowledge. Students speak of the motivating atmosphere in Seppä and Good’s workshops.

Michael Good was a pioneer for anticlastic jewelry and became widely recognized for his work and also for his larger anticlastic sculptural pieces. With his designs he won the Intergold Grand Prize and a certificate of merit in 1981. Michael Good came to goldsmithing via an unusual route. After a few years in a youth-advocacy organization on the Lower East Side in New York, Good moved to Maine, USA with his family and began to experiment with different smithing techniques in his spare time before he heard about Heikki Seppa and his technology. Today his jewelry is represented in the most well known galleries in the USA and Europe. Good also was president of the American Jewelry Design Council. When he talks about anticlastic forms, he stresses the space which surrounds the item of jewelry: “We are used to experiencing forms as closed spaces instead of seeing them as part of a whole”. For him, the best jewelry is: “Open, articulate and simple”. <div class="adframe"> <div class="adframe300x250"> <div class="adframe300x250label"> <i class="fa fa-gem icon"></i> Ganoksin is sponsored by</div> <center> <div id='div-gpt-ad-1479837980983-0' class="ad-item" style='height:250px;'> <script> googletag.cmd.push(function () { googletag.defineSlot('/87578358/ganoksin-paragraph-2', [ 300, 250 ], 'div-gpt-ad-1479837980983-0').setTargeting("topicid", ['jewelry-design', 'jewelry-making']).addService(googletag.pubads()); googletag.pubads().setCentering(true); googletag.pubads().enableSingleRequest(); googletag.enableServices(); googletag.display('div-gpt-ad-1479837980983-0'); }); </script> </div> </center> </div> </div> 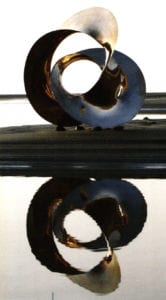 Benjamin Storch: “Motion I”, copper, 40x36x15 cm, sculpture developed from a model of a minimal surface spanning a mathematical defined knot. It follows the principle of having only one edge and one surface 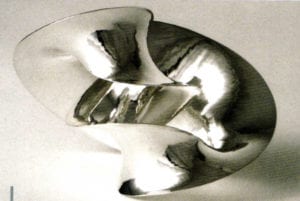 Benjamin Storch: “Octave Loop”, 8x6x5 cm, silver object, inspired by “harmonograms” traced by the interplay of two pendulums, modeled in CAD by revolving a cross section along a space curve 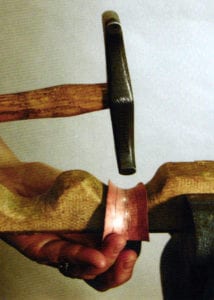 Betty Helen Longhi: Demonstration by Cynthia Eid: Anticlasting a strip of metal using a wood stake and a metal hammer

One Finnish goldsmith, who has worked in particular with anticlastic raising like Michael Good is Juha Koskela. He studied in Heikki Seppä’s program in Washington University, St. Louis, USA and worked with Michael Good for eight years before returning to Finland. His repertoire covers jewelry and sculpture. He uses niobium to create color accents, which is unusual for the jewelry sector. Like titanium, niobium can be electrically anodized to create a wide array of colors using a process known as reactive metal anodizing. In 2003, Juha Koskela was named Goldsmith of the Year by the Finnish Association of Goldsmiths. Betty Helen Longhi took workshops with both Seppä and Good to learn their technique. However, her pieces have their own individual look, as do those of Koskela. She creates jewelry, containers and objects as well as teaching courses. She says of her work: “There are three activities I love: sailing, dancing and creating in metal and all of these are interconnected. The forms of sails and waves show up in my designs and when I move on the dance floor I have been told that my dancing looks like my work”. What was started by Heikki Seppä was intensively researched by Benjamin Storch, both practically and theoretically. He took a workshop with Michael Good, worked there for two weeks and became fascinated by the fluid, curvaceous surfaces in sheet metal which led him to a PhD research project on Anticlastic Forming at the School of Jewellery in Birmingham, UK, which he completed in 2004. He investigated the process with reference to mathematical methods. He is now concentrating on sculpture more than jewelry and also creates large pieces of up to one meter long. Therefore he uses curved oak branches as sinusoidal stakes. The sculptures, created in various different metals, e.g. gilding metal, are often patinated and varnished. He forges the forms, then solders and reforges them. Storch says of his works: “The tension contained in the material is visible”. <div class="adframe"> <div class="adframe300x250"> <div class="adframe300x250label"> <i class="fa fa-gem icon"></i> Ganoksin is sponsored by</div> <center> <div id='div-gpt-ad-1479839315130-0' class="ad-item" style='height:250px;'> <script> googletag.cmd.push(function () { googletag.defineSlot('/87578358/ganoksin-paragraph-3', [ 300, 250 ], 'div-gpt-ad-1479839315130-0').setTargeting("topicid", ['jewelry-design', 'jewelry-making']).addService(googletag.pubads()); googletag.pubads().setCentering(true); googletag.pubads().enableSingleRequest(); googletag.enableServices(); googletag.display('div-gpt-ad-1479839315130-0'); }); </script> </div> </center> </div> </div> 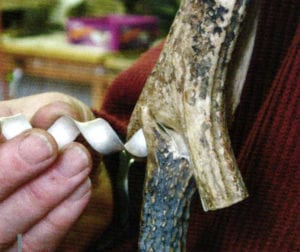 Brian Clarke: The historical making of a ribbon torque 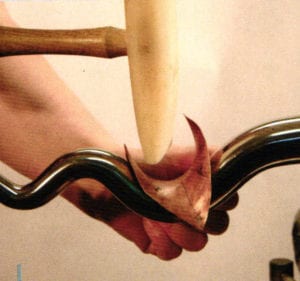 Demonstration by Cynthia Eid: Making an anticlastic object by working with a plastic mallet on a metal sinusoidal stake 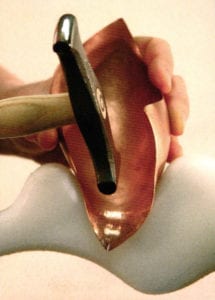 Demonstration by Cynthia Eid: Making an anticlastic transition of a synclastic form using a plastic stake and a metal hammer

The smithing process of the anticlastic form

Michael Good developed some press operated tools which use a series of dies made especially for the anticlastic raising process. With his permission Benjamin Storch explored the possibilities of the presses further. Although the press tools are good for production jewelry there are limitations in localized control. The ideal sheet metal gauge depends on the size of the form and the tensile strength of the alloy used. It is necessary to experiment. The gold- or silversmith forms his shape on the s-shaped curved stake or filed nylon or wooden blocks (e.g. Beech tree). If the base is made from nylon or wood, an iron hammer is used and with an iron base a nylon hammer is used so the sheet metal has the ideal conditions for forming and not becoming too thin or too work hardened so it can snap. Before the metal becomes too hard and brittle, it is annealed. Benjamin Storch stresses, that the result is influenced by many factors such as the shape of the workpiece and how it is held, how it is placed on the saddle-shaped stake and where the hammer blow are placed, as this influences the amount of stretching and compression occurring in different sections of the surface. The proportions of the stake, the ratio between the two compound curvatures, i.e. the depth of the saddle, should also match the particular application. The basic forms of the tools can be readily purchased from retailers, especially in England and the USA.

(Brian Clarke; with explanation on the anticlastic technique by Michael Good)