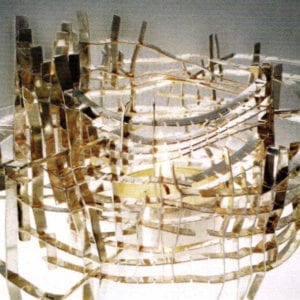 Andrzej Boss (47) is a graduate of the Academy of Fine Arts in Lodz, Polamd, where he runs the Goldsmithing Form Design Studio, holding a professor’s degree. As he admits himself, contacts with students have an inspiring effect on him, “You have to be up-to-date all the time, know the current trends, which in turn provides new impulses to continue your work.”

Doubtlessly, this is one of the reasons why his works (especially his choice of the means of expression, which depends on the message the author wants to convey) are so surprisingly au courant and insightful. However, this is mainly an effect of his incessant search for new forms and contents of jewelry and other objects created by him. His first designs in the 1980s stood out from the generally accepted convention and were characterized by strongly geometrised forms, spatial constructions and unusual or even unexpected combinations of materials. 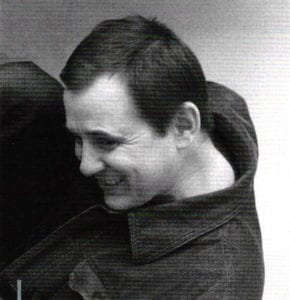 Andrzej Boss is esteemed for his creative individualism, perfect workmanship and perspicuity of his works 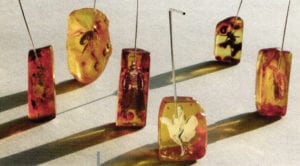 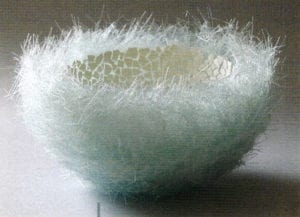 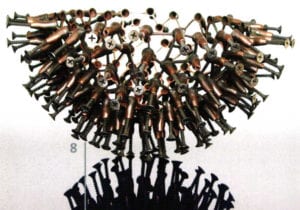 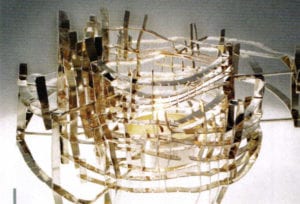 Dialogue with the viewer

Andrzej Bosss participation in the Majdanart goldsmithing workshops, which took place in Majdanpek, Serbia in 2002, was a real milestone in his creative life; then he used for the first time materials that were not normally used by goldsmiths, which he had previously been quite reluctant to do. “Each participant wrote on a small piece of paper what the most important thing for them was. The pieces were put between two silver plates (my palm print was on one of them) and riveted. Would the message be ennobled if the words were engraved in silver? Isn’t paper, which has for ages been used for sharing thoughts, a more adequate material?” That experience had a decisive impact on his artistic career; shortly afterwards such base materials as paper, resins and silicone settled for good in his studio. Over time, the selection of materials has become increasingly more subordinated to the message intended to convey by a given object. The artist has also started a dialogue with the viewer and stopped seeing jewellery through the prism of its decorative function. It has become a kind of a medium for him, a carrier of more universal contents. The author himself has admitted that “clarity or even forthrightness of expression sometimes requires using unusual means. It is impractical to hammer your answer for weeks in the era of instant communication.” An example of such an approach can be found in the work entitled ‘United colors of . . .’, which took part in the Silver ‘Scandal’ competition in Legnica (2006); a silicone ring finger with deer antlers hanging on a cell phone leash is the author’s comment on the reality and influence of the omnipresent media and advertisement on our lives. The usage of the base materials additionally emphasises the ignoble methods used by big corporations. Paper reappeared in 2005 in his collection entitled ‘Lost’, which consisted of one hundred rings, bands connected with folded fragments of city maps. In the same year, a collection of colorful paper rings made according to the same principle won the 1st prize in the prestigious competition ‘Contrasts’ presentations. Since these were two-color rings, one could easily change their color sets and shape.

Ganoksin is sponsored by
st prize in the prestigious competition ‘Contrasts’ presentations. Since these were two-color rings, one could easily change their color sets and shape.

Andrzej Boss is also preoccupied with the question about a work’s value. Can it be determined by the value of the materials used? If not, then by what? Is the viewer’s interest at a given moment a sufficient criterion? His answer has been embodied in three bowls made of salt dough gilded with metal leaves, one on the outside, one on the inside and the third one is a kind of a sieve with large holes. Not only do they fail to perform their useful function but also require special storing conditions. The bowls also continue the table topic, which was initiated with a collection of silver salad cutlery in the shape of bird of paradise flowers, which has been gradually supplemented with subsequent proposals of unusual (for table accessories) objects. 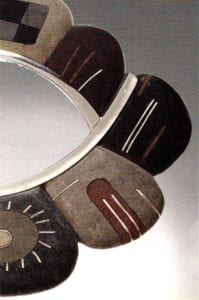 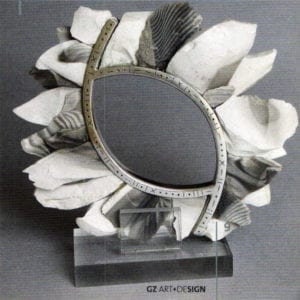 Works made of striped flint and amber, the two characteristically Polish materials, compose a significant chapter of his artistic creations. His fascination with flint let him draw away from amber, which had captivated his imagination for several years. “That change let me realize that any material can provide food for an artist’s imagination, each material has a message encoded inside.” His works of striped flint include both jewelry and sculptures, the creation of which has been inspired by the shape of a given natural lump. Still, it is amber what has become his ‘beloved’ material. Although a great majority of Polish designers usually have longer or shorter periods of emersion in work with amber, still rarely do its effects make such an impression a Andrzej Boss’s masterpieces. Especially that he has departed from a certain stereotypical way of thinking about and working with this material; his necklace made of ambers packed in plastic bags won the Grand Prix in the international amber jewelry design competition Amberif Design Award in 1997. This competition is a very important artistic challenge for him; he has participated in it from the beginning of its existence, commenting on the reality with his works. For the topic ‘Symbols of Love’ (2003) he proposed a work representing two straightened out fingers showing the characteristic gesture, with a piece of amber between them, which made the work interpretable in a multitude of contexts. A silver labyrinth drawn on three pieces of amber, which formed a whole work, was his response to the topic ‘The Amber Route’ (2004); similarity to the ‘Lost’ collection, that work fitted in the topic of searching for something or someone, which he has been exploring in a wider scope. His collection ‘Elixirs’, which gathered together such personages as Barbie, Ken, Batman, Marilyn Monroe and even Virgin Mary immersed in amber, with silver cocktail straws, represented his artistic statement regarding the topic ‘The Organic Product’ (2005) and at the same time it provided a meaningful comment on body improvement operations. A similar implication was included in his last year work belonging to the topic ‘Inclusion’, amber inclusions in a woman’s body which in the future may not only replace tattoos and body piercing but even will become a kind of subdermic microchips, symbols of identity and IDs.

Andrzej Boss has presented his works at twelve individual exhibitions. The most recent one, held last year, showed seventy-eight works created by him over the last two decades, and at more than one hundred Polish and international exhibitions. His works can be found in numerous private collections and in several Polish museums. In Germany viewers can marvel at his works at the Amber Museum in Ribnitz-Damgarten. He has also participated in and won numerous goldsmithing competitions.

All articles by this author
Previous The Mysterious Power of Gold
Next Namu Cho: Jewelry as a Talisman
Social media