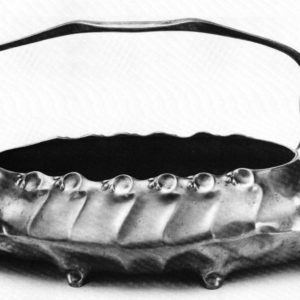 The first American exhibition of Kayserzinn Pewter, the trademark for art pewter ware manufactured at the turn of the century by J.P. Kayser Sohn of Krefeld, Germany, occupied the changing exhibitions area in the design installation floor at the Museum of Modern Art in New York from October 12, 1989 through February 6, 1990. The exhibition, comprised of 35 pieces, including candlesticks, tea set and vases, was organized by Associate Curator Cara McCarty, who explains its significance below.

The use of pewter as a material in the applied arts was revived during the turn of the century when artists throughout Europe were searching for new forms of expression. Among the most unusual pewter objects from that time were those manufactured with the trademark “Kayserzinn” by the German firm J. P. Kayser Sohn.

The company had made traditional pewter ware in Krefeld since 1862. In 1894, Engelbert Kayser, the son of Johann Peter Kayser, set up the Kayserzinn art workshop in Cologne. The sculptor Hugo Leven, and subsequently Hermann Fauser, made the most original designs, which stood outside Art Nouveau’s main line of development. Instead of the movement’s characteristic preoccupation with applied surface decoration, Leven and other German Jugendstil artists concentrated on the invention of new shapes.

Leven’s first pieces were conventional in style and were decorated with pictorial motifs, but a distinct break occurred in his work following a trip to France in 1896. Inspired by the French glass designer Emile Gallé, Leven abandoned historicism to pursue a more sculptural approach. He developed a “thumb-pressure relief” technique for modeling the clay from which pewter casts ultimately would be made. Works dating from 1900 to 1904 have been selected for the exhibition “Kayserzinn Pewter.”

The natural world was a source of inspiration for Art Nouveau artists, many of whom gave linear expression to organic forms. Leven instead attempted to discover a material’s expressive qualities. In his emphatically three-dimensional pieces, sculptural forms replaced applied decoration, the malleable metal evoking quivering muscles, perhaps, or creatures from the bottom of the sea. This intense organic vitality contrasted sharply with the engraving and medallions that traditionally adorned pewter. 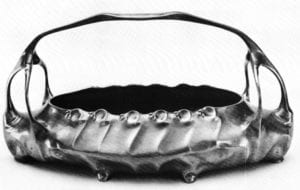 Occasionally, a piece was made more acceptable by the addition of a rosette or a plant motif, but generally representation was avoided. Despite the absence of explicit imagery the pieces can be startlingly bizarre. Gothic in spirit, the novel and fantastic shapes appear to be melting under their own weight. They provoke a mood of uneasiness in contrast with the exuberance of French work of this period. The pewter faithfully conveys the modelling of the supple clay, enriching the objects with an immediate physicality. One understands the design through touch as fingers find their way into the impressions left by the sculptor, reexperiencing in effect the piece’s creation.

Kayserzinn has affinities with the eccentric forms by George Ohr and Tiffany that were executed as unique craft objects. But although the Kayserzinn designs appear handmade, they were produced industrially. The smooth, simplified Forms lent themselves to repeated casts of identical units. Prototypes made in Cologne were assigned model numbers and sent to Krefeld to be manufactured. Engelbert Kayser’s progressive thinking included the development of a safe lead-free alloy for his utilitarian products. Most works were sold with a dark matte patina and the buyer had the option of polishing them to a velvety luster in imitation of silver.

In spite of its relatively short period of existence, Kayserzinn received considerable international recognition, winning gold medals at the Paris and St. Louis world fairs of 1900 and1904, respectively, and at the 1902 international exposition of decorative arts in Turin. They were even available through mailorder catalogues. Originally introduced as a substitute for silver, pewter was never as reverently regarded. Its consistency dictated less refined design solutions than for silver, and Leven excelled in his use of the material precisely because his forms exploited pewter’s unique qualities. The firm’s demise shortly before World War I was purportedly due to the increased cost of tin, the main ingredient of pewter, but the waning of pewter’s use was inevitably due to a preference for glass and ceramic ware , and in particular to the advent of relatively inexpensive silver plate.

The Art Nouveau style proper, radical in its time, seems overly sweet to us today, but there is something decidedly different about Kayserzinn designs. Though compatible with other decorative works from the period, their lack of specific imagery contributes to their enduring quality; their significance today may be principally in the way their abstract imagery anticipated German Expressionism.

Cara McCarty is Associate Curator in the Department of Architecture and Design at The Museum of Modern Art, New York.

© 1989 The Museum of Modern Art. This article first appeared in the MoMA Members Quarterly, Fall 1989. Reprinted with permission.