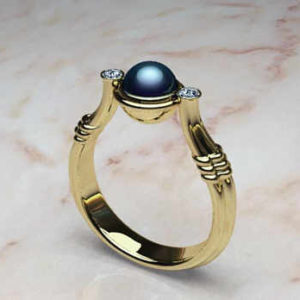 Carpal tunnel syndrome nearly ended Jesse Kaufman’s career as a bench jeweler and goldsmith. But CAD/CAM technology, a supportive online jewelry community, and a strong commitment of time and money gave Kaufman the tools he needed to return to work as an artisan. 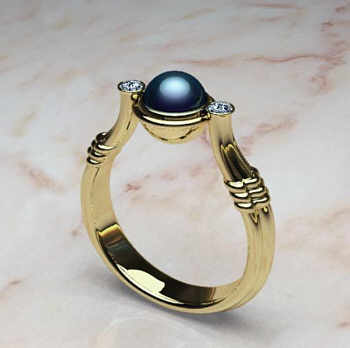 There are plenty of stories about how computer-aided design and computer-aided manufacturing (CAD/CAM) have helped jewelry retailers, designers, and manufacturers create and produce exciting new products quickly and more efficiently. You rarely hear about how CAD/CAM technology has transformed someone’s life-until you talk to Jesse Kaufman.

Kaufman, owner of JDK Jewelry Design, West Hartford, Conn., was a bench jeweler and goldsmith for 16 years, repairing jewelry and creating custom designs for jewelry stores in the central Connecticut area. But in 1998, he began to feel the first twinges of carpal tunnel syndrome, and a year later the ailment forced him to give up his livelihood.

“I was devastated for what seemed like a long time,” Kaufman says.

Although he had no computer experience, Kaufman began considering a career in graphic design. He bought his first computer and began taking classes in computer graphics, never imagining he would someday use both to design jewelry. The breakthrough came when he started browsing jewelry sites on the Internet and stumbled upon an Internet mailing list called the “Orchid List.”

Kaufman found the list on a Web site called Ganoksin.com, where an international community of people in the jewelry industry “meets” to exchange ideas on jewelry-related topics. It was through this virtual community of CAD/CAM users that he learned about computer design and manufacturing – and how he could use these tools to start a business designing jewelry, without aggravating his carpal tunnel injury.

“It is a wonderful source of support and connection with other jewelers,” he says. “I’ve made some really great friends and contacts through Orchid.”

He now creates jewelry designs and prototypes for jewelry manufacturers such as Honora Industries, New York, and designers such as Carol Ackerman. Kaufman provides either the computer design of a product or the prototype.

“A lot of this type of work is traditional and conventional but is meant to be mass produced,” he says. “It’s very precise work, and one of the benefits of CAD/CAM is that I can control things to a tenth of a millimeter. If you’re saving a customer even a half-gram of platinum on a ring when they’re doing hundreds of rings, that’s quite a savings. It’s very cost efficient for manufacturers.”

Kaufman also designs custom pieces for individuals and has his own line of rings and pendants inspired by organic shapes and classical themes. When creating individual pieces, he casts the design in gold or another metal, sets the gemstones, and does whatever the creation calls for or the customer specifies.

The Road to Independence

Although Kaufman enjoys his life as a CAD artisan, the road to learning the new discipline and developing a business wasn’t easy. And it represented a radical departure from creating designs with his hands.

Through a workman’s compensation program, Kaufman first learned two-dimensional design and then advanced to a computer program called Rhinoceros. More commonly referred to as “Rhino,” the program uses mathematical equations to define complex 3-D models. He then learned how to use Flamingo, a “plug-in” software product that renders realistic 3-D photo models from all angles, allowing the user to create images that can be e-mailed to customers.

Learning CAD was difficult for Kaufman. First, he had to spend a great deal of time learning the technical aspects of the system. Since he’d never owned a computer until his disability forced him out of bench work, the learning curve was steep, and the training took about eight months. He also had to learn how to visualize a design differently, imagining how a computer-generated image could become a finished product. But Kaufman made the commitment and allowed himself the necessary time to learn.

“To be honest, I never thought I would get it,” he said. “It was only by doing the supplied tutorials over and over, reading the manual, and asking a lot of questions that I began to grasp the concepts. And ultimately, making 3-D jewelry models forced me to learn viable modeling strategies.”

Kaufman made the move from CAD to a full CAD/CAM operation by becoming proficient in a product called ArtCAM, a design and modeling software package that enabled him to create not only 3-D designs but also the specs to allow a CNC (computer numeric control) machine to automatically create the prototypes. This allows him to provide complete design services in his studio. ArtCAM is produced by CAD/CAM developer Delcam, Birmingham, England, and is distributed in the United States by a company called Model Master, Woodstock, Ga., which builds model-making machines for the jewelry and awards industries. Kaufman now uses both Rhino and ArtCAM for his design work. He purchased the ArtCAM product and Model Master CNC milling machine as an integrated system. 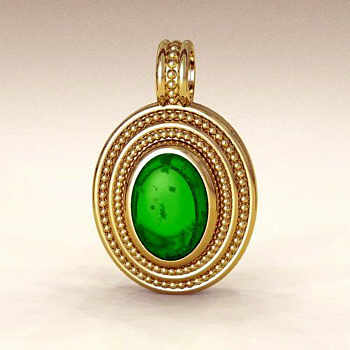 The cost of entering this new phase of design is significant. But Kaufman says that in the long run having this capability in house will save time and money. “I learned that if you plan to send out files for rapid prototyping on a regular basis, that will be a lot of money going into someone else’s pocket that could be invested in your own milling machine.”

Mike Adams, a Model Master researcher and developer, who met Kaufman through the Orchid List, says the difference in cost between Rhino and ArtCAM is significant ($900 for Rhino compared with $7,500 for ArtCAM). But to succeed in CAD/CAM jewelry design, a financial commitment is as important as a time commitment. “For a good CAD/CAM system, you’re talking about $25, 000, he says. “You can do it for as little as $3,000, but most people [who follow that route] fail.”

There is another practical reason for Kaufman to have his own CNC milling machine. If a prototype has a problem, he can fix it quickly by going back a few steps and making some simple adjustments on the computer.

“I can take a client’s design, mill it on the machine, and have a finished wax fairly easily,” he says. “It’s always nice to see the wax here, and if I need to make a change I can do it here. “

He adds, “We use regular jeweler’s wax and some plastic materials that can be molded. And I can also mill a metal mold for plastic injection [to create] a plastic model that can be burned out.”

The road from bench jeweler to business owner took Kaufman about three years. But he says he still feels like a newcomer to the technology and has much more learn. Add to that the rapid rate at which the technology changes, and CAD/CAM becomes a lifelong challenge.

Back when Kaufman was in jewelry sales, one of his jobs was with Christian Bernard. At the most recent MJSA show, Kaufman met the head designer and manager of product development for Christian Bernard, and they talked about doing some work together. “Meeting those guys as prospective customers made me feel like I’ve come full circle in some way,” he says.

There are other ways in which Kaufman has come full circle. Instead of asking for CAD/CAM advice on Orchid List, he’s now hosting his own 0rchid List e-mail forum where he responds to “frequently asked questions” from others who use and aspire to use CAD/CAM to design jeweIry.

And instead of being just a Model Master customer, he’s now a company consultant as well. In fact, it was at the Model Master booth that Kaufman met the Christian Bernard representatives.

But for Kaufman, the most important factor is that he can use the technology to earn a living doing what he enjoys. “It’s been a rough road and a lot of hard work,” he says, “but I really love what I’m doing now” 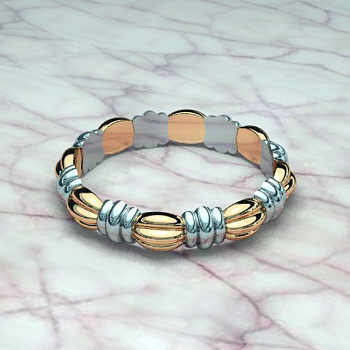 By Anthony DeMarco, Senior Editor
Originally published by JCK Magazine June 2003
All rights reserved internationally. Copyright © author. Users have permission to download the information and share it as long as no money is made. No commercial use of this information is allowed without permission in writing from author.
Category:
About the author

Help deciding what machine to use as my Buff and shine. Jooltool or lapidary