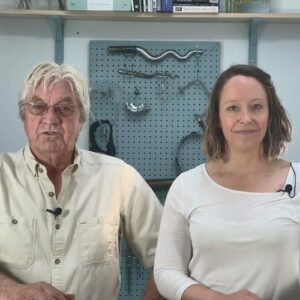 Pattie Parkhurst has been pursuing jewelry craft since she was a young child.  This passion led her to pursue metalsmithing in college.  After graduating, she worked as a jeweler and continued her education by taking a multitude of workshops taught by master metalsmiths, which expanded her skills tremendously.  By 35, Pattie became part owner of a metalsmithing school that specialized in master workshops.

After college, Pattie served on the board of The Colorado Metalsmithing Association (COMA) where she learned the anticlastic raising metal technique.  This process involves hammering different metals, over and over on an antler-like form.  By immersing herself in this ancient technique, she combines her love for nature and metalsmithing into cohesive nature inspired metal forms.

Her work is mastered and constantly evolving through observational learning, a continuous process that comes from having many jewelry-related businesses.  Pattie loves outdoor adventures, guest lecturing, and teaching.

Richard Sweetman is an artist and teacher with a BFA degree from Colorado State and an MFA degree from the University of Oregon.  He worked as a goldsmith for George McLean Goldsmith in San Francisco.  Richard then taught for many years and has the distinction of starting the Jewelry and Metalwork Program at Arapahoe Community College near Denver.  Several summers he continued to learn and sharpen his skills at Haystack Mountain School of Crafts in Deer Isle, Maine.  He currently teaches workshops at his studio and for other guilds. 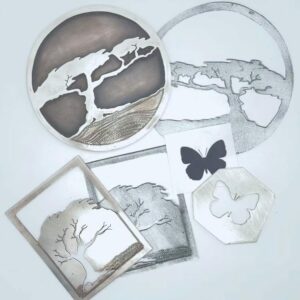 Sawing and piercing metal using a jeweler’s saw is a fundamental skill for any bench jeweler. Join Ganoksin instructors Richard Sweetman and Pattie Parkhurst to learn the basics of this essential technique.