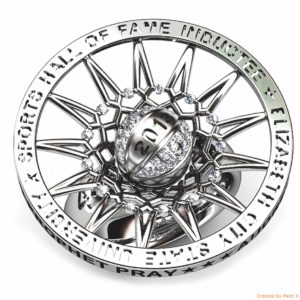 The Value of Good Team Communication

Anyone who’s played a team sport knows the value of good team communication. Without it, no matter the skills of the players involved, victory is more difficult to achieve. And designer Paul Klecka of Paul Klecka Inc. in Carlsbad, California, knows that when it comes to jewelry making, nowhere is that need more evident than in the relationship between a designer and his casting team.

He was recently commissioned by a woman about to be inducted into her university’s sports hall of fame to design a ring commemorating the event. With his customer wanting something unique and not reminiscent of a Super Bowl ring, Klecka designed a ring featuring a net and rim centered by a basketball. The rim featured her and the school’s name, the shank had her playing number, and the year of her induction was engraved on the basketball. Klecka tried to keep it as lightweight as possible for affordability.

Designing in Matrix, he created the ring to show his customer, but her request to add 0.14 ctw of pavé-set diamonds to the basketball added a new technical consideration. “The ball had to be heavy enough for pavé, not delicate, and strong enough to support the whole ring,” says Klecka. “I also had to add a top plate to the rim in order to give her a place for all the lettering she wanted on it.” To keep the cost within the customer’s budget, they settled on making the ring in 950 palladium.

As he finalized the design, he knew the ring would need to be broken into components for casting. But, he says, the components “had to be keyed to each other so that when it came time for the jeweler to put [the ring] together, they would fit properly and nothing would overlap the lettering.” Recognizing that success comes more easily with good communication, Klecka proactively sent his rendering to Teresa Fryé, owner of Techform Advanced Casting in Portland, Oregon, to get her input on castability and sprueing, something that Fryé appreciates because it helps ensure optimum results.

Techform agreed with Klecka’s separation of the elements—the ring band, net, basketball, and outer rim. In the outer rim, the top and side met at a 90-degree angle, and each had 0.7-0.8 mm deep debossed lettering. The Techform team recommended that for casting in palladium, he reduce the lettering to a depth of 0.4 to 0.5 mm, with 0.5 mm their recommended maximum. “When molten metal enters the mold and there’s an unstable investment condition created by deep blind recesses surrounding the letters, it can blow out the features,” says Fryé. “The strength of the investment is just too low to withstand the force, so you will have a combination of molten metal mixed with investment, and that’s a very bad combination.”

Klecka had also wanted to make the outer rim hollow, or lighten it in some way to save weight both for costs and to prevent the ring from being top heavy. “We worked with tenths of millimeters for tolerances of letters and how thick the plate was,” he says. “This definitely involved collaboration back and forth between myself and Teresa and her team.”

Techform next proposed the placement of sprues, both on the CAD rendering and those to be hand sprued, speaking with Klecka to confirm locations. “We go with it intuitively, but sometimes our desire for optimal sprue locations might create an issue with finishing. An area might be sensitive aesthetically or functionally, so the jeweler might say don’t sprue here,” says Fryé. Communication with the designer on sprue placement can be a critical part of the process. Klecka adds, “Fortunately Teresa and her team understand not only the casting process but are sensitive to the challenges of subsequent assembly.”

Techform built the majority of these sprues—heavy and short for the platinum group metal due to its rapid solidification and low fluidity—into the CAD file. “If we hand sprued the entire ring, we would have distortion and issues with the cleanup process,” Fryé explains. “By placing them in the CAD design we get cleaner junctions with a cleaner wax assembly. Otherwise we would have created a lot of wax artifacts on the piece.”

To ensure the net would cast properly, a halo sprue feeds metal into the tip of each “strand” of the netting. The thin outer rim, with its lettering on both the top and sides, needed multiple heavy, short sprues—eight in total. This accommodated palladium’s quick solidification and low fluidity, while also helping it to de-gas upon solidification.

The basketball received some special treatment because of the recessed letters. “Techform recommended that, in order to get a good casting, the walls not be too thin in the recesses,” says Fryé. “In order to feed that area well and not starve it for metal, we added a raised pad on the inside of the ball.” 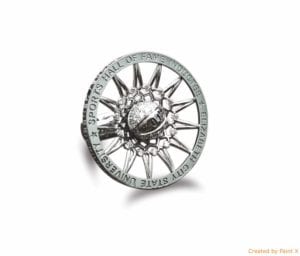 All of the preparation led to a perfect casting the first time. “We didn’t have to run this twice,” Fryé says. “We put a lot of thought into it up front.” Score a win for the home team.