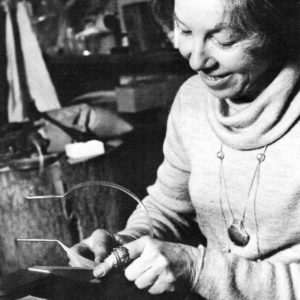 She taught jewelry and metalwork at OSU, Ohio Wesleyan University and at the Cultural Arts Center in Columbus from 1963 to 1984. Her professional activities took her from Peru to Oxford, England to Egypt. She conducted workshops for the World Crafts Council, Ohio Artists Blacksmiths Association, lectured to American Society of Metals in Columbus and did research at the Smithsonian Institute and Oxford. She has exhibited in 42 group competitive shows receiving 20 awards and 23 invitational and one man exhibitions throughout the United States and Hawaii. She has written technical articles for professional periodicals and has her work represented in numerous books. She was a member of Ohio Designer Craftsman, the Society of North American Goldsmiths, American and World Crafts Council, American Society of Metals, and the Columbus Rock and Mineral Society. 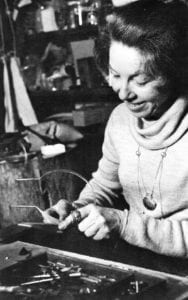 When walking into the house, one knew that Vada was at work. The stereo was off, yet the air was musical. If the anvil was not ringing, the saw was singing. Somewhere metal chimed in unison with the hand of its master. There was a beauty in watching that is as unexplainable as it is unforgettable. Metal was formed in such a loving fashion that peace, harmony and unity existed between it and the master. Metal gave her everything it had.

There was trouble when it didn’t. Frustration! Disappointment! The metal did not love her. Only a scholarly approach could calm her. The material was never the problem. Understanding, or perhaps the creator was suspect. If the metal was not going to sit up and sing; she searched for “why.” Like at Scotland Yard, the hunt went on until the answer was found. Eventually the metal sang—no matter what its composition. Questions did not cease until her goal was attained.

Studies were undertaken concerning any material selected for possible inclusion in a piece of jewelry. Only fully understanding the temperament of the material would allow her to achieve the perfection she expected of herself. With a mind like a sponge, she questioned unceasingly until all pertinent data was known. Then came technique to make her master of the trade. For a process or technique, the world was scoured. Now that the metal sang, she wanted to try a different tune. Process, procedure and technique were not fully understood or developed until they could be taught. Even this was not always sufficient. If someone else did it, she had to add this knowledge to her repertoire. 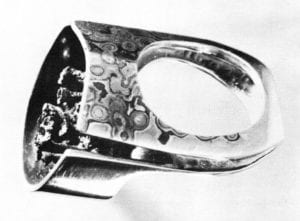 Fascinated by the works of the ancients, she studied to try and learn their processes. Heart and soul searched for answers. Good minds were questioned hard. Museums, books, researchers, professors and metallurgists were consulted. Ever so slowly ancient processes were brought back to light and taught. She felt the ancients had a feeling and understanding for the materials they worked with that today is lost.

Beauty was coveted in any form. There was a touch and understanding that surely the ancients and greats possessed. Tools had to feel right; hammers and anvils had to sound right. When better sounds were heard, she coveted their maker. For her, metal moved in such a fashion that it wanted to be there, it flowed to its new shape and dimensions.

I remember once, when we tried to define what she was, for all her scholarly brilliance and masterful craftsmanship, we couldn’t come up with a simple definition. Products of her hands won awards. Many of her works are published, classified as art by the critics. There have been lectures to blacksmiths, silversmiths, goldsmiths and metallurgists. Teaching provided her livelihood. Her knowledge of lapidary was phenomenal. She could critique a professional photographer. To each of these groups, she was one of them.

All articles by this author
Previous Metalsmith ’85 Fall: Exhibition Reviews
Next A Metalsmith’s Guide to Toronto
Social media