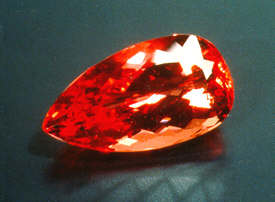 The word “topaz” was derived from the sanskit word “tapas” which means “fire”. Throughout history, topaz has been used to describe yellow to orange gemstones. Today so much blue topaz is available that some people may think of topaz as a blue gem.

The most expensive colors of topaz will be the rare red and intense pink colors and some of the very bright orange colors. Fine orange hues of topaz are called Imperial topaz; they may have secondary colors of brown or reds.

Topaz is a gem that is very often eye clean, so stones with good clarity are available. The red color can be a strawberry hue: these are quite hard to find and will command the highest price. Deep pinks can be exceptionally beautiful. Pink topaz is mined in Pakistan. Pink stones are also available from Brazil; but most of these stones have been heated from orange material. It will not be easy to find the red and deep pink colors; if the color is intense, expect to pay an expensive price per carat. Pastel pinks are also available. These rarer topaz colors generally are found in stones under ten carat sizes.

Imperial topaz colors are easier to find and moderate price per carat prices will be asked for fine quality stones. Brown overtones will lower the value. Pale oranges and golds in smaller sizes may be found in the low price per carat range.

Brown topaz is available but there isn’t much demand for it. Some brown topaz has a tendency to fade in sunlight. Brown colors could be a product of irradiation. Smoky quartz is often erroneous called “smoky topaz”. Brown shades of topaz will mostly fall into the low price per carat range. Brown and colorless topaz crystals can range is size from small to very large; so any size gem is possible. There is little demand for brown or colorless topaz.

Blue topaz is found in nature but it is generally quite pale in color and is rarely available in finished gemstones. Most of the blue topaz found today has been irradiated and heated from colorless or light brown topaz. The color is stable and will not fade. Under extreme heat fading could occur, but it is unlikely you will put your irradiated blue topaz in your self-cleaning oven cycle. Topaz can be treated by various forms of irradiation and a variety of shades occur, which are called sky blue, super blue, London blue, Swiss blue and so on. Blue topaz can be found in almost any size or shape and falls into the low price per carat group.

Topaz is the standard gem for the hardness of 8 on Moh’s scale, consequently it is difficult to scratch. But topaz is brittle and has perfect cleavage. The treated stones chip fairly easily. Topaz should be set into protective mountings.